It's less expensive than that V8 swap you've considered.

Reese Counts
For three decades, enthusiasts have argued whether the Mazda MX-5 Miata needs more power. For its part, Mazda seems fine with leaving the Miata as is, even reducing the horsepower from the third- to fourth-generation models, though the car lost a little weight. That's where tuners like BBR in the UK and Flyin' Miata here in the US step in, offering aftermarket solutions for those that crave a little more grunt. BBR announced today that its new 248-horsepower Stage 1 turbo kit is ready and waiting for the new 2.0-liter-powered ND Miatas, including the new Miata RF.

BBR's first Miata turbo kit was released all the way back in 1990. Since then, the shop has been tuning and honing its craft, releasing ever-more potent variations its comprehensive power kit. This new version, like the previous ones, focuses not only on adding more power but maintaining the level of drivability and refinement you expect from all Miatas. The Mazda electronic safety features are retained, and the team is working on CARB emissions approval. That said, with BBR tune an ND Miata will hit 60 mph in just 5.0 seconds, roughly two seconds quicker than stock. 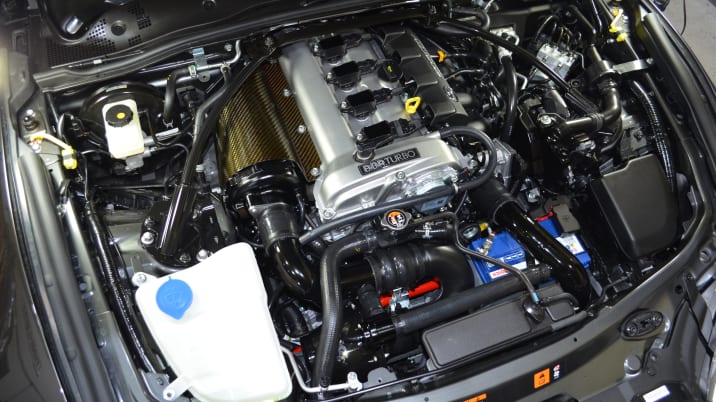 To get the peak 248 horsepower and 236 lb-ft of torque, BBR does more than simply slap on a big turbo. In 2014, BBR began using a Mazda3 as a development vehicle in preparation for the new Miata's launch. A twin-scroll turbocharger is mounted onto a custom cast-iron manifold. A front-mounted aluminum intercooler keep things cool and doesn't require cutting up the bodywork. The engine breathes in through a K&N air filter and exhales through a stainless steel downpipe. The whole thing is controlled by BBR's Starchip / EcuTek RaceRom ECU software package.

Other upgrades include silicone turbo pipes, an aluminum battery tray, a recirculating piston type dump valve, a carbon-fiber heat shield, and stainless steel oil and water lines. BBR is offering extended warranties from 12 to 36 months. In the US, the sole distributor is Flyin' Miata in Colorado. At $5,695, it's not a cheap proposition, but it is less expensive than one of Flyin' Miata's V8 swap kits. Less expensive (and less potent) performance kits are also available.