GM now sells 3 plug-ins in the US, like Ford General Motors has started US sales of the Cadillac CT6 Plug-In after taking its first domestic deliveries of the China-produced sedan last month. The model is GM's first new plug-in hybrid in the US since the automaker discontinued sales of the ELR extended-range plug-in last year. The arrival and sales, first reported by InsideEVs, were confirmed by Cadillac spokesman Andrew Lipman.

Not surprisingly, the sedan isn't cheap, as the CT6 Plug-In is priced at $75,095, or almost $12,000 more than the gas-powered variant, though that figure doesn't include federal and state tax credits for electric vehicles. For that tab, buyers get a 335-horsepower luxury car that can go 31 miles on electricity alone, and 0-60 miles per hour in a little over 5 seconds. The model gives GM three plug-in vehicles to sell to the American public, or the same number US competitor Ford offers.

InsideEVs estimates that about 100 of the sedans have been delivered to US dealers, so the car remains a relatively low-volume affair. By comparison, GM's Chevrolet division has sold 5,563 Volt extended-range plug-ins and 3,092 Bolt electric vehicles through March. Cadillac sold 534 units of the ELR in 2016 after moving 1,024 the previous year.

GM opted to produce the plug-in hybrid in China because of that country's receptiveness to new models that feature alternative and environmentally friendlier powertrains. Additionally, such production shortens the distance to the CT6's battery maker LG Chem, which is producing the car's battery packs in South Korea. On that note, GM has previously estimated that the Cadillac CT6 Plug-In will move more units in China than in the US. 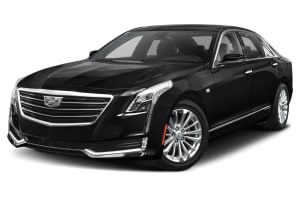