Toyota FT-4X concept is an off-roader for Millennials

Reese Counts
The FJ is dead, long live the FT. Toyota's retro-inspired off-roader may be a few years gone, but the Japanese automaker wants to show that it's still interested in the segment. At the 2017 New York Auto Show, Toyota unveiled the FT-4X concept, short for "Future Toyota-Four-wheel-drive Crossover." While vehicles like the 4Runner and Tacoma are aimed at more hardcore off-road enthusiasts, the FT-4X is aimed squarely at city dwellers who want something more capable than a RAV4 or C-HR.

The FT-4X was designed by Toyota's Calty Design Research, in Newport Beach, Calif. It's the same group that penned the Concept-i that debuted at this year's CES. The basic framework was a vehicle that could go anywhere at a moment's notice, as Calty says Millennials love the outdoors but rarely plan ahead. There are a number of design features that make the FT-4X a bit of a Swiss Army knife. 
The exterior design is distinctly rugged and far more squared off than some of Toyota's other offerings, like the new C-HR compact crossover. The trick rear hatch, dubbed the "Multi-Hatch" by Toyota, opens both upward and sideways. A large rotatable handle allows a user to select which direction. Large, reflective tow hooks sit in the bumper and allow easy vehicle recovery for those drivers who are a little more zealous than their vehicle. The roof rack has tie-down hoops at each corner. In addition, the base of the hoops have a power supply that's good enough to power lights or other campsite or tailgating electronics.

There are callbacks to previous Toyota off-road vehicles. The window on the driver-side rear fender is an homage to the Toyota Pickup Xtracab (the one from Back to the Future). The window is removable, sort of like the top on the original 4Runner. Rather than the modern Toyota badge, the FT-4X uses the traditional, bold Toyota name on the grille, rear hatch, and steering wheel.

Like the outside, the interior of the FT-4X has been designed to be versatile and rugged. The rear hatch has two storage boxes - one to keep items warm, the other to keep things cool. That includes snacks, blankets, gloves, and anything else that could benefit from a slight temperature adjustment. The rear seats fold flat, while the load floor features rails for tying down cargo. The interior lights can be removed and used as a flashlights, while the rear door handles can be used as water bottles.

A compact sleeping bag from The North Face stores in between the front seats, functioning as an armrest when not in use. The front air vents can rotate in order to dry off gear in the storage area below. The radio is removable and can be used as a portable stereo. Rather than a installing a navigation system, Toyota installed a phone mount just above the digital instrument cluster. Most Millennials use their phones for GPS, and Toyota doesn't use Apple CarPlay or Android Auto, so this may be an improvement over their current system.

Since this is a concept, there isn't actually an engine under the hood. Toyota says that it could potentially employ a small-displacement four-cylinder that would send power through a mechanical four-wheel drive system. With a selectable low-range, it would have some genuine off-road credentials. In order to remain composed on the road, the FT-4X uses MacPherson front struts and a double wishbone rear suspension.

There is no word on if the FT-4X will make it into production. If it does, expect all of the neat features like the water-bottle door handles to be scrapped. Toyota has a great history of competent, well-built off-roaders, so cross your fingers for a follow up the FJ Cruiser. 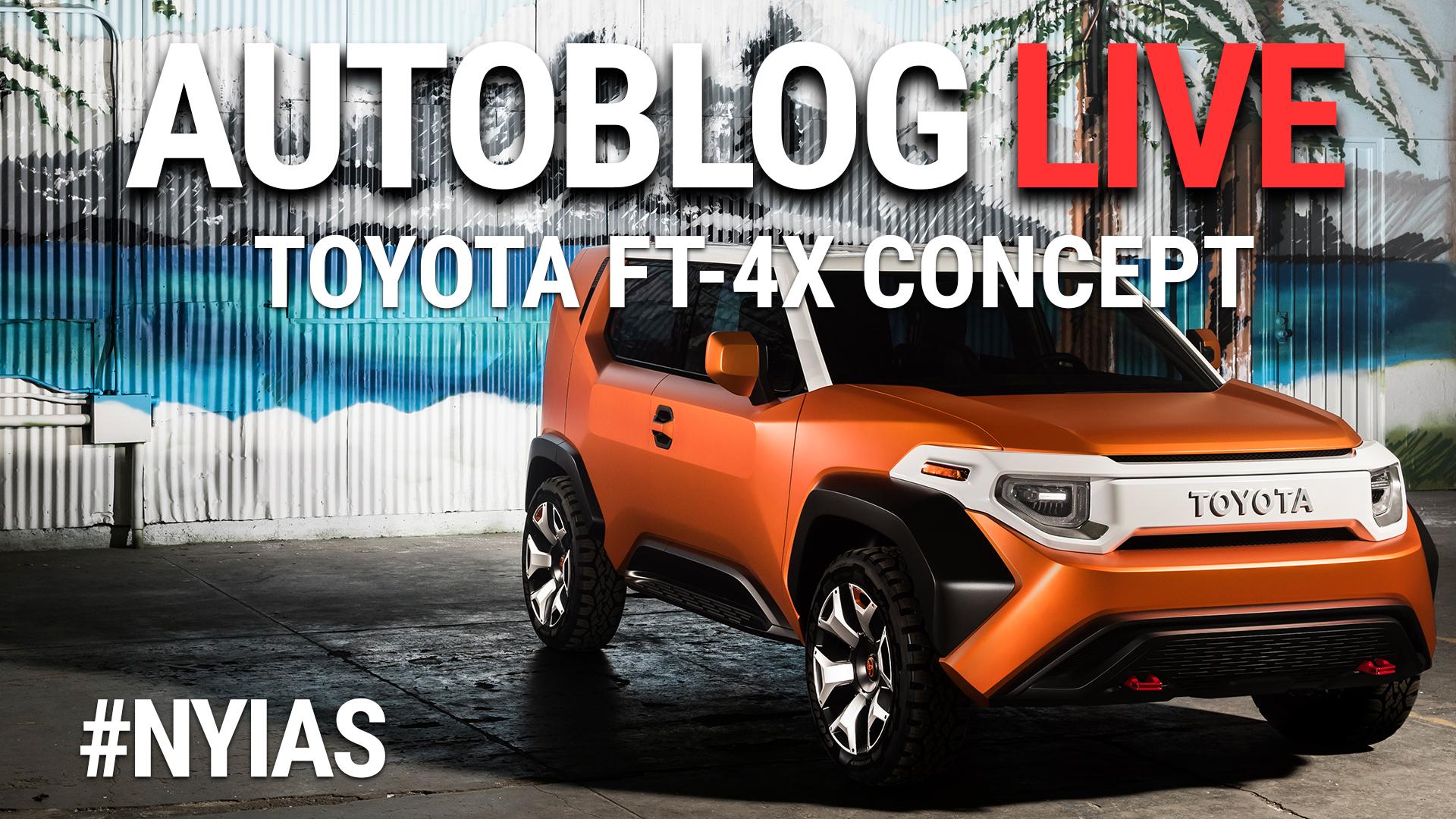