Jeep Grand One and Quicksand Concepts lead the charge to Moab

And the Safari Concept hides some 2018 Wrangler easter eggs.

Jeep's past, present, and future all share equal billing at the 51st annual Easter Jeep Safari in Moab. We're suckers for vintage Jeeps, so the all-new Grand One Concept really stands out among the seven vehicles that make up Jeep's conceptual take on the off-road event. It's based on a 1993 Grand Cherokee in a slightly early celebration of the model's 25th anniversary. Exterior mods include custom fender flares for clearance over 18-inch wheels and 33-inch BFGoodrich Mud-Terrain KM2 tires, trimmed front and rear fascias and what FCA is calling a "subtle wood grain" splashed on the vehicle's bodysides. An extended wheelbase ought to offer a bit more room inside, and a two-inch suspension lift will help when the going gets tough. No alterations are mentioned to the vehicle's 5.2-liter V8 or 4-speed automatic transmission. 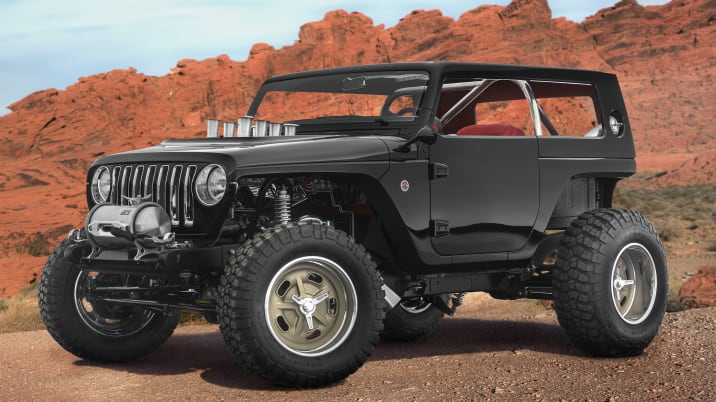 The second most interesting concept for Moab is the Jeep Quicksand. It's clearly Wrangler-based, but instead of a traditional rock-climbing focus, this one's built for the sand dunes. Power comes from a worked-over Mopar 392 Crate HEMI engine topped with an eight-stack fuel injection system that peeks through the hood. A six-speed manual sends the ponies to all four wheels, but with a unique twist: 32-inch BFGs in the front and 37s in the rear in what Jeep says is its first application of staggered tire sizes on a concept vehicle. A Warn winch concealed in a vintage-style Moon tank at the front is the finishing touch. 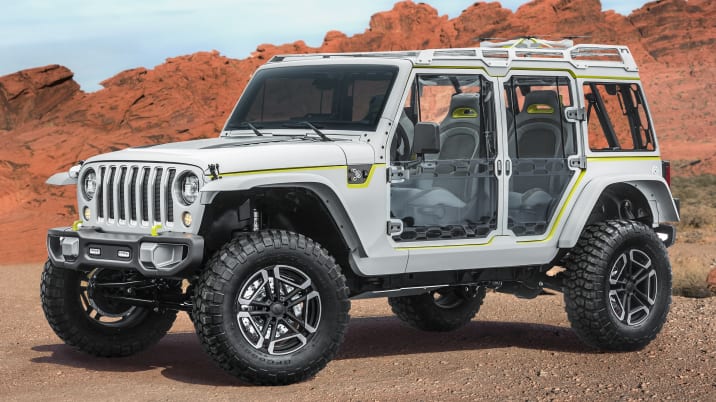 The Jeep Safari Concept is all about letting the outdoors in while keeping the elements out. A translucent hardtop and four aluminum and clear vinyl doors are the most obvious changes from stock, and two rear seats have been angled outward so that their occupants get a better view outside. Dana 44 axles and a two-inch suspension lift come from the Mopar parts catalog, but the roof-rack-mounted drone and dash-mounted iPad are custom one-off touches. Power comes from a stock 3.6-liter V6 and five-speed automatic transmission.

Perhaps more intriguing than all the custom bits and baubles, though, are what appears to be next-gen Wrangler bodywork. Take a look at the kinked grille, the outer slats of which are pinched by the headlights, and the shape of the rocker panel between the front and rear door. No, this isn't exactly a 2018 Wrangler hiding in plain sight, but it's certainly a nod toward the future. 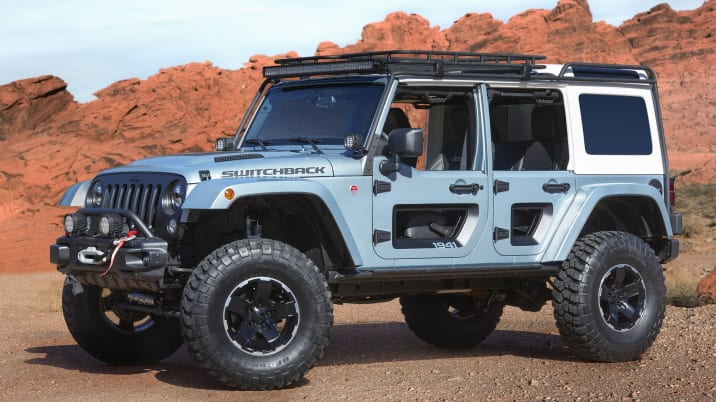 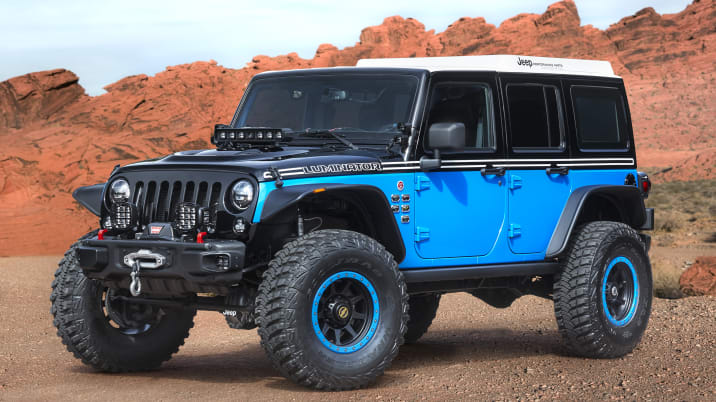 The Jeep Luminator Concept will be nice to have around when the lights go out at night. It's plastered in LEDs head to toe, including some cool seven-inch projectors in place of the standard headlights. The magnetic underbody rock lights are a cool touch, but the lighted drone landing pad on top seems mostly for show, and the rooftop solar panel can't possibly be powerful enough to provide any meaningful battery life for all those LEDs. 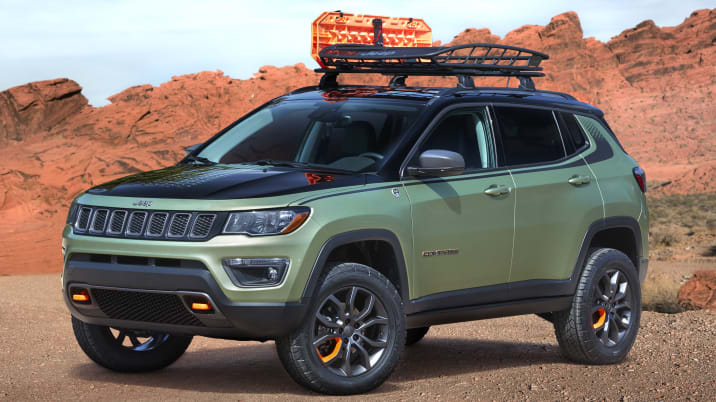 Rounding out the new Jeep concepts is the Trailpass. It's based on the new Compass Trailhawk, but gets a 1.5-inch lift kit and 18-inch wheels shod with Continental TerrainContact all-terrain tires. A Mopar/Thule roof basket holding some traction mats ought to come in handy if the Trailpass can't pass a trail. A 2.4-liter four-cylinder engine and nine-speed automatic are unchanged from stock. 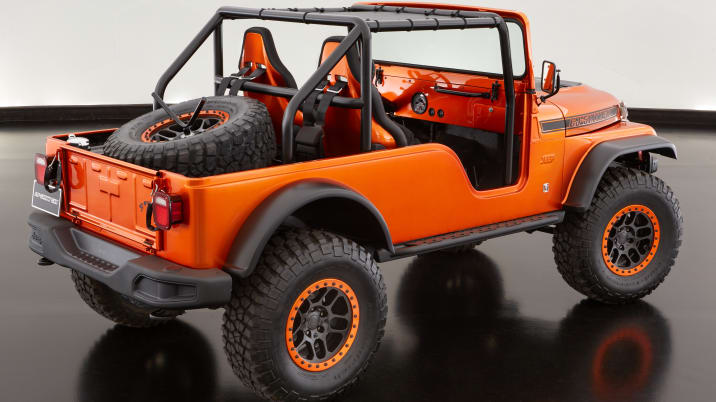 The final vehicle Jeep is bringing to Moab is the CJ66 Concept that was first shown off at the 2016 SEMA Show in Las Vegas. A Mopar 345 Crate 5.7-liter Hemi engine sends 383 horsepower through a six-speed manual transmission to all four wheels. A narrowed body hearkens back to the time when Wranglers were actually CJs. Take a look at the instrument panel and its single centrally located gauge.

Check out the videos below for a closer look at each of these concept vehicles from Jeep.

$256 - $2,095 Nat'l avg. savings off MSRP
See Local Pricing
I'm not in the market for a vehicle at this time. Please move this suggestion to the side for 30 days.
Huge Savings