Joel Stocksdale
Two years ago, Mazda introduced a fascinating range-extended electric car called the Mazda2 RE Range-Extender. It took an electric Mazda2, and dropped in an itty-bitty 330cc rotary engine. It wasn't the rotary-powered sports car we had hoped for, but it seemed like a unique way to keep the quirky engine alive and kicking. But not long after the car's reveal, it seemed to disappear. Now the basic idea has resurfaced with a few modern updates in a couple of US patents.

The first patent is pretty straightforward and describes a range-extended EV similar to the BMW i3. At the front is an electric motor driving the front wheels. At the back is an internal combustion engine that powers an electric generator. In the middle is a lithium-ion battery for storing and delivering electricity. It's the same set-up as that Mazda2.

The second patent is for an engine start-and-stop system, but specifically for rotary engines. The system is designed to shut off a rotary engine when not needed, much as modern piston engines do. It also stops the rotor in a position that closes the intake port to ensure no fuel or exhaust emissions slip out through the intake tract. This is necessary since there are no valves in a rotary, and air and exhaust come through ports that are "opened" and "closed" by the rotor itself. The patent also describes the possibility of firing a spark plug after the fuel has been cut to eliminate any leftover fuel emissions. This system would theoretically improve a rotary engine's fuel economy and emissions significantly, which would be a boon as those are two of the rotary's major weaknesses. 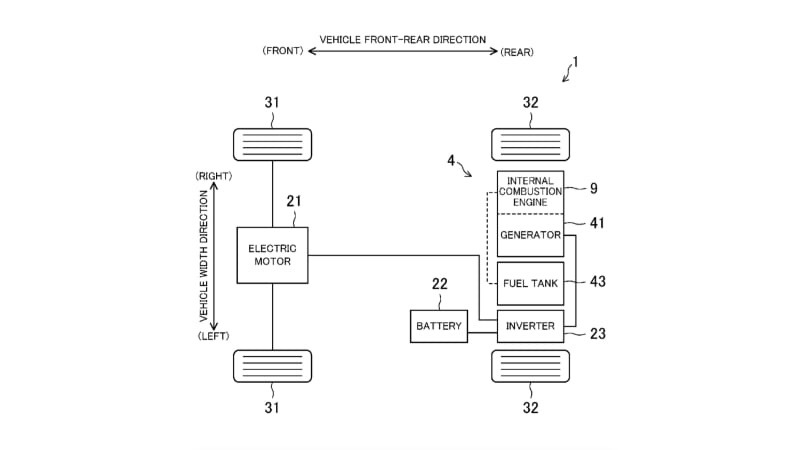 The rotary-engine patent also includes the same range-extended powertrain drawing as the first patent. It's there as a description of a possible application. And in such an application, where the rotary wouldn't have to run all the time, the system could take advantage of the rotary's inherent strengths. Weight can be kept low thanks to the engine's small dimensions, which should help in keeping the car sprightly and efficient. Rotaries are renowned for smoothness, too, so it shouldn't need too much refining and sound deadening, the latter of which adds more weight. The small size would also help with packaging, leaving more space for people, cargo, or possibly batteries.

And since it has been patented, the company may be looking to bring the system to market. Unfortunately, it's no guarantee, since the company also patented a new turbocharged rotary engine that seemed suitable for a sports car, but nothing more has surfaced, and the company squashed hopes of a production RX-Vision. Even so, we certainly hope this powertrain reaches production. It's an interesting iteration of the range-extended EV idea, and production of it would keep our hope for another rotary sports car alive.