The 2018 Ford Expedition goes aluminum and gets bigger

David Gluckman
You're looking at one of the biggest aluminum-bodied productions car, well, ever. In switching from steel body panels to the lighter-weight material on the 2018 Ford Expedition SUV, engineers were able to reduce mass by up to 300 pounds. That number likely applies to the extended-wheelbase Max model – the heavier something is, the more weight it stands to lose – while the regular-length Expedition has grown inside and out and still loses weight.

These new models are also a lot more handsome. The current Expedition, which has had the same basic styling since 2007, looks a bit ungainly. For 2018, the design is much softer and better differentiated from the Ford F-150 pickup with which it shares parts. From the side, the look is maybe a bit generic, with a big-Explorer feel to it, while the front end is a nice blend of cues from Ford's crossovers and the updated 2018 F-150 pickup. You can also seem some similarities with the Chevy Tahoe and Suburban, the Expedition's main big-SUV rivals. 
Functionally, the design has a higher beltline than the outgoing model, which means less glass. The weight loss allowed Ford to make the standard-size Expedition longer by four inches with a three-inch wheelbase stretch, while the extended-wheelbase Max model, which replaces the Expedition EL, is an inch longer overall. Both are wider as well, and the overall height drops just a bit compared to the current models. To try and hide some of the height and preserve headroom, the roof is raised between the rails. 
The body-on-frame utility will continue to be offered in 4x2 and 4x4 variants. Power again comes from a 3.5-liter EcoBoost twin-turbo V6 – the 2018 Expedition will get the latest version of that engine backed by a 10-speed automatic transmission. Ford isn't talking output numbers yet, but we expect it to have roughly the same power as the F-150 with this powertrain, which makes 375 horsepower and 470 pound-feet of torque. It comes with engine auto stop-start as well as active grille shutters to manage airflow and improve fuel economy. Synthesized engine sound is piped in on all models (likely to simulate the tone of a V8), while the top Platinum model gets active noise reduction.

Continuously Controlled Dampers (what Ford calls its adaptive suspension) will once again be available, and the Expedition keeps its independent rear suspension, with a revised suspension design up front. It will all have less weight to deal with, which should mean an improvement in ride quality. But most people are probably more concerned with the interior and all of its available gadgets. 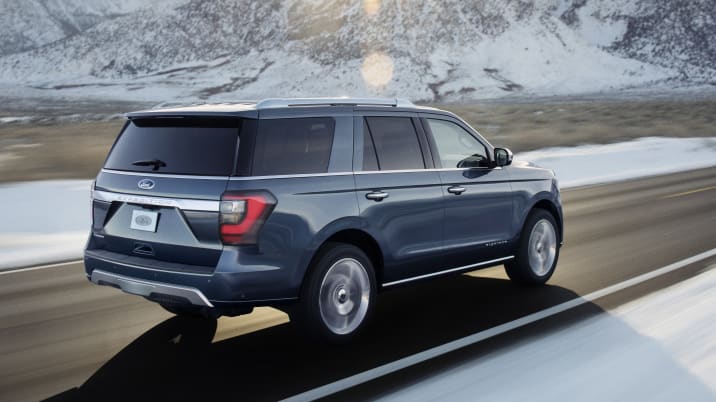 The available all-wheel-drive system retains a two-speed transfer case and adds the Terrain Management System dial from the Explorer, which lets you tailor the vehicle's systems for what you're driving over. An electronic locking limited-slip differential will be available as well. To free up space on the center console, the new Expeditions use an electronic shifter with a rotary dial.

As before, the Expedition and its long-wheelbase counterpart offer three rows with eight seats, or seven if you go for the optional captain's chairs. The basic interior structure is borrowed from the related F-150 pickup, which is especially evident in the front row. Differences include details like the door skins and the addition of a second small glove box for the SUV. And to that end, this 2018 model has twice the cubby space of the old one, because Ford found that current owners have theirs so packed full of stuff. (If they're not careful, the extra space will result in more stuff crammed in, negating a lot of that weight savings from the switch to aluminum.) And between cup and bottle holders, there are 17 places to stick a drink in the new Expedition. 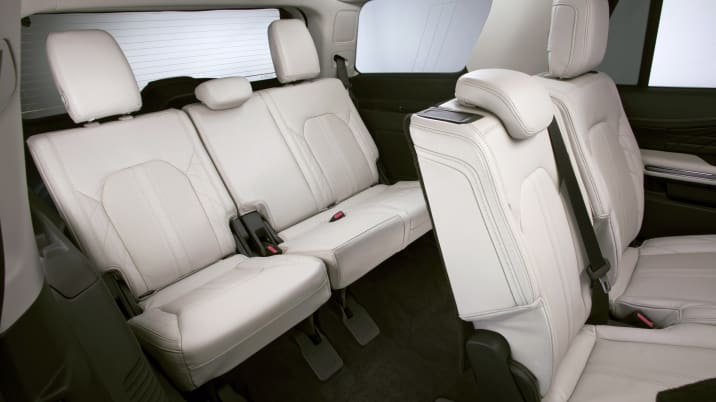 The second-row seats can now tip and slide to provide access to the third, and they can do so while a child safety seat is in place. The third row can recline, which can be a help when putting taller folks back there. Power fold seats are available, with buttons in the rear to release all seats and both raise and lower those in row three. When all of the seats are down, they now create a flat load floor, and it still fits 4x8 sheets of plywood. Cargo and people in the second and third rows will benefit from an available Panoramic Vista Roof – one place weight can be added back in (because people love big sunroofs).

Then there's all of the tech stuff: wireless charging for phones, a WiFi hotspot that reaches 50 feet from the vehicle, Sync 3 infotainment on an 8.0-inch screen with Apple CarPlay and Android Auto functionality, the FordPass app, and to keep everything charged, there are six USB ports standard, plus four 12-volt plugs, and an available 110-volt AC outlet. Adding the rear seat entertainment package brings another USB port, plus connectivity to your cable TV at home through Sling. There is a pair of screens on the backs of the front seats for those in row two, while those in the way back can stream the show on devices they bring and connect to the in-vehicle WiFi connection.

Safety and convenience items include a 360-degree camera system, blind-spot monitors, adaptive cruise control with stop and go, lane keeping, collision mitigation, and enhanced active park assist. Pro Trailer Backup Assist, which lets you steer a trailer using an intuitive knob on the dash, has been brought in from the F-150. And Ford expects the Expedition to improve on its best-in-class tow rating, which currently maxes out at 9,200 pounds. 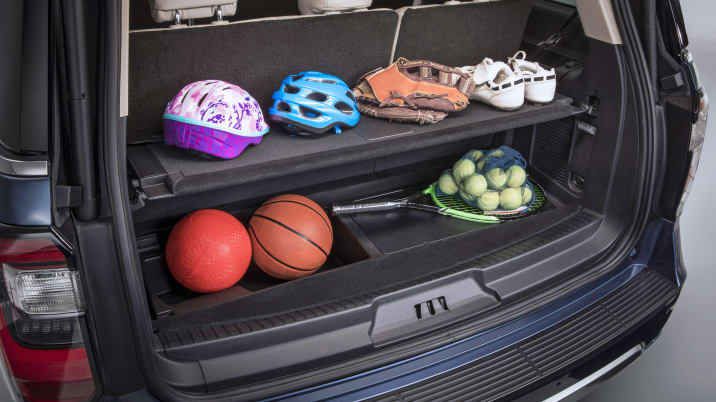 The flip glass returns on the rear tailgate, although the opening is now higher up and may be a reach for some folks. Behind the third row, Ford is offering what it calls the Advanced Cargo Manager – it's a hinged shelf/organizer system for the cargo area that converts from a gate to keep things from rolling out the back, to a parcel shelf that can hold up to 50 pounds. It stows flat with the rest of the flat load floor when not in use. Ford is also very proud of a lip at the rear of the cargo area that is supposed to keep small items from falling out when the hatch is opened. It looks like a small angled lip, but Ford says it's more complicated than that. It's just not saying how, exactly.

The Expedition and long-wheelbase Expedition Max will go on sale in the fall of 2017. The model will once again be produced at Ford's Kentucky Truck Plant in Louisville. Trim levels will once again include XLT, Limited, and Platinum models, as well as a less expensive XL model aimed at fleets. We'll have more info on mechanicals, features, and pricing closer to the on-sale date. The new models are being unveiled today at Ford Center at The Star where the Dallas Cowboys practice and will then be on display at the 2017 Chicago Auto Show.