Matthew Borst
Major superhero ensemble movies seem all the rage these days. Each comic's fan base loves to tote the uniqueness and superiority of its own movie over the competition, but I find they have very similar characters. You could choose between the confidence-inspiring leader, the loyal simpleton who is just happy to be along for the ride, or the erratic rebel who constantly challenges the leader and wins all the attention. Rally car options tend to follow that same pattern.

In the first day of the rally school at Team O'Neil, you are strapped into the loyal FWD Fiestas with even less power than room for my knees in the back seat. They are the perfect introduction to rally cars because you just mash the throttle and brake whenever you want to turn to keep you out of too much trouble right away. The second and third days add some complexity with leader-type AWD vehicle techniques and Scandinavian maneuvers. Day four amps it up even more with a couple of rebellious RWD BMW's mixed in for good measure for most enthusiasts. 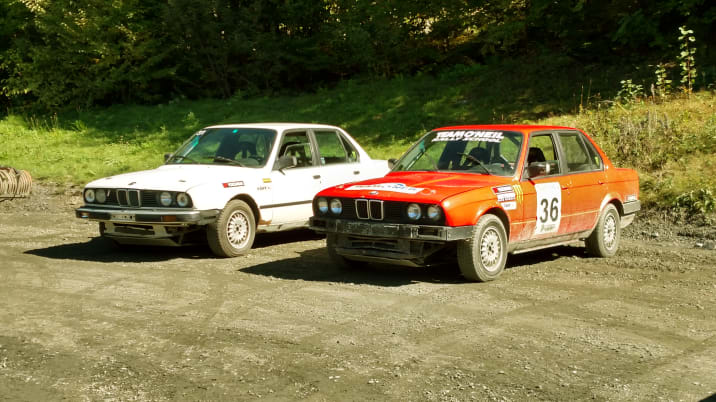 Growing up in a state that sees all the different forms of precipitation thrown at it by Mother Nature, I have grown to appreciate the abilities that AWD and FWD cars have in less than stellar conditions. My only RWD car driving experience was a Datsun 240Z project that rarely left the garage for more than a warm-up around the block. However, I have seen enough online videos to know what a RWD can do in slippery situations (or even dry situations if the driver is "skilled" enough). I did not want to be that guy who wrapped their car around a maple tree because he floored the gas instead of the brake. I wouldn't categorize my mood as nervous, just tepid.

When I got to class that morning, another new driver was joining the group after his class had gotten cut short in the winter due to icy conditions without any snow to help cushion the sliding. As expected, a couple of E30 3-series were waiting not so patiently for us on the slalom course. However, I was not expecting a Fiesta ST and WRX wagon sitting next to the BMW's – a couple of surprise additions to the ensemble. My mood certainly took a tick up with the outlook of driving these rally masters.
It was quickly apparent just how different the RWD rebels were from the other cars. The FWD and AWD vehicles stressed quick feet and slow hands whereas the BMW's forced you to have quick hands and slow feet. As noted by a Brazilian race driver in the class, "You have to be counter-steering a week before even thinking about getting on the gas" when coming out of a corner with the RWD cars. The back ends of those cars just love to get out from behind you.

For all my trepidation, though, I maintained control of the E-30's at all times and kept them away from any ditches or deciduous vegetation that wished to cause the vehicle (or its occupants – namely me) any harm. One corner on the track that I quickly grew to enjoy with the 3-series was a downhill increasing radius turn where getting on the gas just swung the back end around nicely to line up for a downhill sprint. However, one corner of fun isn't enough for me to overcome my preference for AWD precision and control.

The car that took me by total surprise was the Fiesta ST. I knew that journalists rave about the hot hatch on the road, but that doesn't always translate onto the gravel where traction is prized over power. However, the boost kicks in at such a low RPM that you dart from cone to cone before you even realize how far you've made it down the track. I also learned that a limited slip differential was installed to keep the hatchback planted when pulling out of the turns. It felt like an AWD system had quietly slipped into the car and begged you to drive it faster and faster. I can't believe I missed this bundle of fun on my first trip through the class. 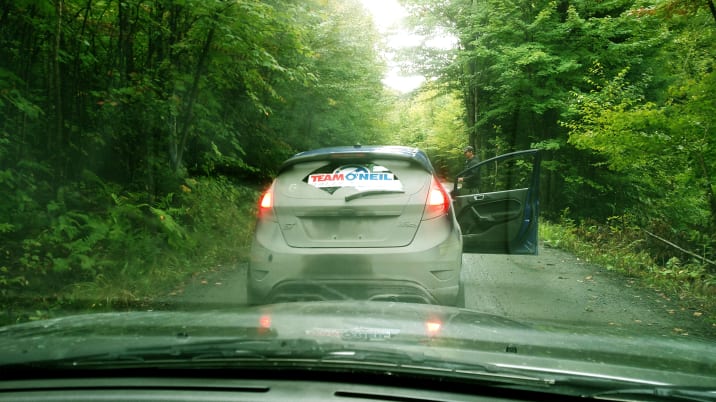 Unfortunately, the WRX didn't make it through the class. A proposed leak in the exhaust catalyst bogged down the wagon to the point where you couldn't even tell it apart from its less powerful Impreza sibling. It doesn't help that the turbo has so much lag that you're pretty much at the next corner before it decides to even kick in. There just aren't enough straightaways on the short course of that day to really get to experience all the extra power of the WRX over the stock Impreza. Plus, I prefer the predictability of a naturally aspirated vehicle over the A.D.D.-esque behaviors of a massive turbo any day of the week.

I ended the day with an appreciation for the cultish admiration that RWD cars get from fellow enthusiasts. It is very satisfying when that back end slides around perfectly to line up for the next corner. However, more often than not, the back end just wants to be a nuisance for me from really lining up the car up properly. I'll stick with my AWD vehicles. A little bit of understeer is far more controllable than your trunk trying to drag you into the ditch beside you.

My tepidness of all the cars had waned by the end of the day as I understood all of their personalities now. The loyal simpleton Fiesta was perfect for a predictable run when testing out a new course. The rebellious BMW always looked best on camera careening around corners with its back end and driver dueling for which would lead the vehicle. However, I'm picking the AWD leader Impreza to take me on the best line time after time. It may be boring to pick the leader or the rebel as my favorite, but I'll be lining up for the next apex while the rebel is just trying to stay on course.
X