Find of a lifetime: German, American, and Japanese classics rusting in peace An abandoned building with broken windows caught my eye right next to I-15 in Centerville, Utah, a little over a decade ago. I had about an hour to kill before I needed to clock in at work, so I turned my Saab 900 Turbo around and stopped to take a closer look.

It turns out the building was a machine shop that had closed down years ago, and hadn't been touched since. The place was chained shut, but I could see through the broken windows that there were hundreds of old power tools and machines collecting dust inside. But that wasn't why I stopped.

I noticed a blue Toyota Corolla parked on the right side of the shop. Behind it was a cut-up Volkswagen Beetle, another one that had been baja-fied, and a third that was getting devoured by overgrown weeds. The whole lineup was book-ended by an early-1960s Plymouth Valiant station wagon. A bare Beetle chassis (probably yanked from under one of the nearby cars) was leaning up against the building. Three Beetles, a Toyota, and a Plymouth rusting in peace would have amounted to a good find, but I'd only seen the proverbial tip of the iceberg. 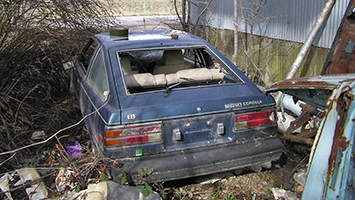 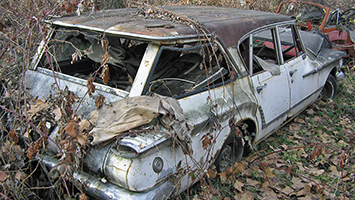 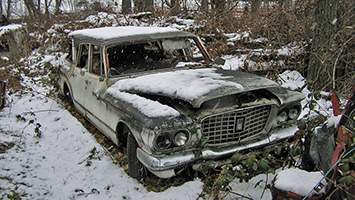 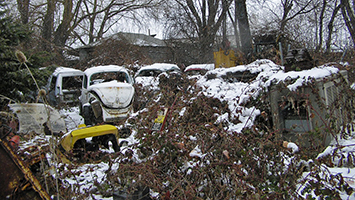 The area behind the shop was home to four or five more Beetles, a couple of split-window Buses (including a single-cab pickup), a four-wheel-drive Toyota Tercel, countless lawnmowers, and a pile of miscellaneous scattered parts – most stamped with a Volkswagen parts number. A Honda 600, a Karmann Ghia, a bay-window Bus, and the decaying remains of a late-1970s Camaro were parked on the side of an abandoned two-story house next to the shop. It was like walking through a mass grave of classics. Motorists' former prides and joys were gathered on the far outskirts of Salt Lake City to collectively return to nature an inch of rust at a time. Registration documents in the Ghia's glovebox indicated it hadn't been on the road since 1983.

Centerville was getting blasted by a blizzard the first time I visited the shop, and I needed to get to work sooner rather than later, so I made a mental note of the address and drove off.

I returned to the shop in the spring. Nothing had moved since my last visit, unsurprisingly, but the snow had melted so I could get a better idea of what was hiding behind the place. Venturing deeper than the last time, I discovered another couple of Beetles covered by weeds, a pair of Ford pickup trucks sinking into the ground, a second Karmann Ghia, and the bare shell of a Porsche 356. The flat-four engine was gone, likely shoved in an unsuspecting Beetle during the 1980s, and the interior was completely gutted.

I was standing on top of one of the Beetles – there was no other way to get to where the Porsche was – when the driver of a late-model Ford F-250 slammed on the brakes as he drove past the shop. I was merely taking pictures, I wasn't vandalizing the cars or stealing parts, but there were "no trespassing" signs clearly posted on the building. The driver saw me standing on the Beetle; we briefly made eye contact. "He's probably the owner," I thought, "and he's probably not happy to see me on his property. Damn it." 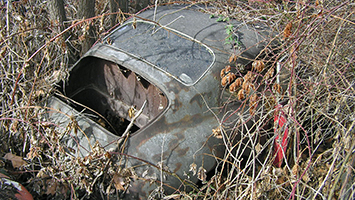 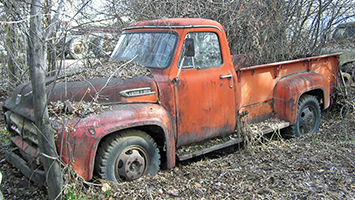 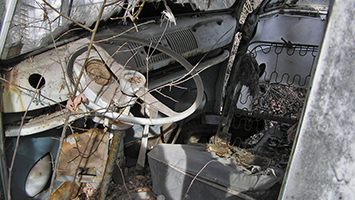 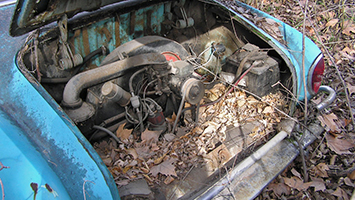 I jumped down from the Beetle and walked towards the front of the shop. I heard the Ford back up, the turbodiesel V8 engine go silent, and the driver's door slam shut. I turned a corner and found myself face-to-face with the man who had just exited the truck.

"Is this your place?" he asked.

"Nope, I was just back there taking a few pictures, I hope that's all right."

"Oh, nevermind! I'm looking for the owner, I've been trying to track him down for years. I want to buy this place."

Phew. That could have gone down a whole lot worse. He thanked me and drove off. I took a few more photos and left, too.

I stopped by the shop again about two years later and noticed someone had started scrapping the cars. Tire tracks on the side of the building gave the unmistakable indication that a bulldozer had been sent in with a clear mission: make it all disappear. Most of the Beetles and the 356 were gone, and many of the machines in the building had been cleared out to make room for two of the split-window Buses. They didn't look salvageable, but at least they were out of the elements for the first time in decades. The single-cab hadn't made the cut, however.

Fast-forward another year and the whole place had become a vacant plot of land. No trees, no cars, no shop, no house, nothing. It hasn't changed since. If you read this, F-250 driver, now's your chance to make an offer on the property.