It's greasy in the shadows.

Matthew Borst
I awoke on the late September morning to a light fog that had rolled itself over the White Mountains of upper New Hampshire. This was a day full of new possibilities. The day before, I wrapped up a repeat of the second day of a five-day course at Team O'Neil Rally School. That was as far along as I had gotten on my first trip out earlier this year, so this third day held new insights and experiences. New can be exciting and overwhelming all in the same moment.

I was dropped off in front of the barn that serves as the school's home base for us students. On the lower level, large garage doors open up to a shop of mechanics that attempt to repair any vehicle issues that we can levy at them. Above the shop sits the offices for the instructors and the classroom where we congregate to learn the latest technique before heading out to the track. Today's lesson included some real rally maneuvers, so I made sure to take plenty of notes so I would not forget them (and then promptly forgot). 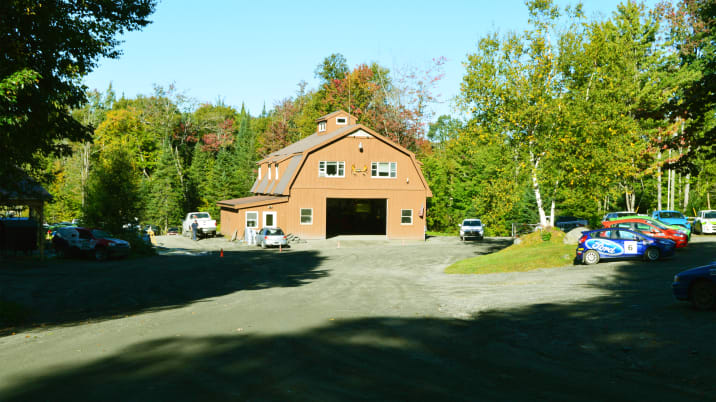 I started back in the Subaru Imprezas from the day before, a welcome sight for this AWD-inclined driver. The first two days of the class are filled with tight, slalom turns to learn the basics of attacking a corner. However, a rally course is filled with all sorts of curves and bends. It was time to translate those corner basics over a longer, sweeping curve. It seems like a simple translation, but apparently several students in the class (myself not included, thank you very much) were having issues with not hitting cones again.

That lead to our first sit-down talk from the instructors of the day. While the instructors won't say much about how frustrated they are in the moment for these steps backwards, stick around until the last day and you'll get a better sense for their views on the class. It's a rapport that builds over just a few days of trusting their lives in our naïve hands. So, we got back into the FWD Fiestas to recover the cornering basics and were able to successfully navigate the cones again.

Then, we moved on to trail braking. The day before, we learned the fancy Scandinavian Flick which gets all the applause from the fans. However, we learned in day three that a rally driver rarely ever uses that technique in a race because they're driving too fast for the corner to be able to manage that maneuver. Trail braking scrubs the excessive speed going into a corner for the latest possible braking. I'll be honest and say it is far less entertaining than getting a single Flick just right, but racing into and out of a corner as fast as possible is the name of the game for any racing. It also happens to be a lot easier of maneuver.

After lunch, the instructors led us on a small circuit of the grounds that go right by the barn and back to the skid pad. It included some elevation changes as well as increasing and decreasing radius turns – apparently, not every turn on a race track has perfectly even radii. We were now changing up partners due to the uneven numbers of the class, and I got to see just what every instructor experiences with the (greatly) varying ability levels of different drivers. I also understood why we got talked to earlier in the day.

My last partner of the day was a professional race car driver from Brazil now residing in Canada who races across Europe (whose airline credit card must love him). You can just sense the feel he has for every car is leagues beyond any of us 9-5 bums. His hands and feet move with a fluidity that automotive journalists think they have and the rest of us just wish we did. He says he is taking the class to gain more skills in wet driving and overall vehicle control. Let me just say I am confident the latter is just fine and all of America could use the former. I'm assuming this is what he told his racing team manager to be able to write off the expenses and is just reiterating it to the rest of us in case anyone is listening. Rally racing is simply pure enjoyment of a vehicle beyond the edges of adhesion. Any real learning that happens during the class is just a mere byproduct of this grin that adheres to your face as you slide around in the mud. 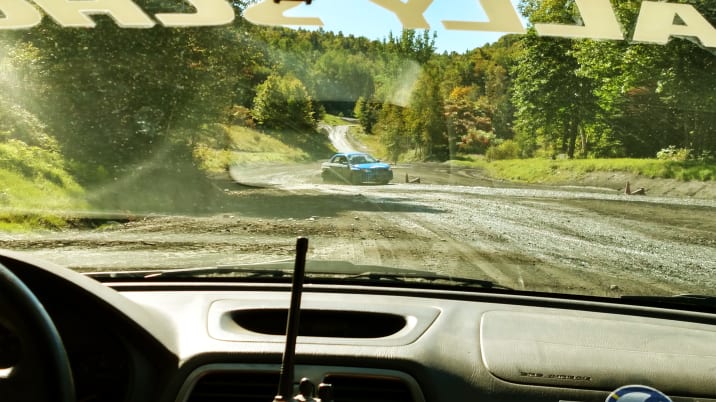 Unfortunately, that grin left my face once during the day. I was finishing up another solid run on the day and got onto the accelerator pedal just a bit early on the last corner. The outside back wheel of my Impreza began to dip into the ditch on the straightaway. However, I did not panic and kept my foot on the gas and the wheel pointing the direction I wanted the car to go. The AWD system clawed the car back out of the ditch and onto our intended path of travel. It was one of the more heart pounding moments of the week, but the instructors had taught us well enough to keep us from freezing up in those moments by then.

A father and son duo got to spend the afternoon in an older BMW 3-series (I'll explain my lack of Bimmer expertise in Day Four) since they were not going to be back the following day. They acclimated themselves quickly to the new RWD techniques so quickly that they were even outpacing some of the AWD drivers - who may or may not have been the same drivers with issues from earlier. That lead to those drivers pushing too much to keep up around a particularly loose corner that was covered in shade and slick from all of the waterings.

The instructors had to sit us down for our second little chat of the day about minding the track conditions over the other drivers. We can't control whether someone is better than us at racing or not. We just have to focus on staying out of the greasy parts in the shadows so that the cars stay in one piece and we can continue to grow in our own abilities. I find this attribute in much more than driving. Life rarely ever slows down for me to be able to manage everything going on around me. I just have to focus on what I am doing to perform the best I can (and maybe improve on a thing or two over time).
X