BMW is hard at work on its new 6 Series coupe and convertible, and these spy photos show some significant styling changes. Up front, it's immediately apparent that the twin-kidney grille is more prominent and wider than the current model. The headlights flanking it also seem to be significantly wider, and if contemporary BMWs are anything to go by, the edges will likely meet the grille.

Moving along the side, the greenhouse is far less formal. The beltline is higher, and the C-pillars and rear window taper inward and are less steeply raked. This gives the new coupe and convertible broader haunches and a generally sportier look. The coupe now has more of a fastback roofline, too. The greenhouse's rear taper also flows into the top lip of the trunk lid, which slopes down on either side. Finally, the rear bumper gets some attention in the form of fully integrated exhaust outlets.

The convertible has a few other notable tweaks. The top no longer has the unusual flying buttresses of the last two generations. The trunk lid also appears to be longer than that of the current 6 Series. Not only that, but it seems to be a bit more flat and less sculpted than its coupe sibling.

This prototype seems close to production, considering that most of the camouflage is restricted to the swirly vinyl wrap. We'd estimate a reveal happening close to the end of this year, or possibly early next year. The car will likely share powertrains with the 5 Series as it has done in the past.

The new 5 Series only has a turbocharged four-cylinder and a turbocharged straight-six. Considering the car's position as a sporty luxury coupe, we wouldn't be surprised if BMW decided to introduce a new V8 with it as well. Expect both rear wheel drive and all wheel drive to be offered. 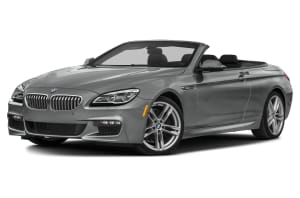