The 2018 Ford F-150 gets updated looks and engines, plus that diesel you wanted

David Gluckman
If you're into trucks, you've been following all of the intel surrounding the 2018 Ford F-150. You'd have seen the spy shots of the refresh and know (with video proof) that there would be an optional light-duty diesel engine to go behind the grille. What we didn't know was that almost every engine offering would be new or updated, or that there would be seven new grilles from which to choose. Spy photos and video can only tell you so much.

The 2018 F-150 is Ford's big news for the 2017 Detroit show. We'll start with the grilles, since that's what you're most likely to notice. Most of the new designs feature a two-bar appearance that stretches across the truck's front end to give it a wider appearance. There are also some with a mostly open layout and one, on the top Limited trim, that fills in the space with chrome latticework. The grilles are supposed to create more visual differentiation between the various models and appearance packages, and from what we've seen they do just that.


All of the grilles are flanked by new headlight units in two versions, one for the low-end trims and one filled with LEDs for the more expensive models. The lights are reshaped, with their ends reaching farther toward the center of the truck. The grilles also dip down lower into a new bumper, with a filler piece separating bumper from lights and grille. Six new wheel designs range in size from 17 to 22 inches in diameter. The truck is a lot more refined looking in person, with a cleaner overall appearance than the version that debuted for 2015. 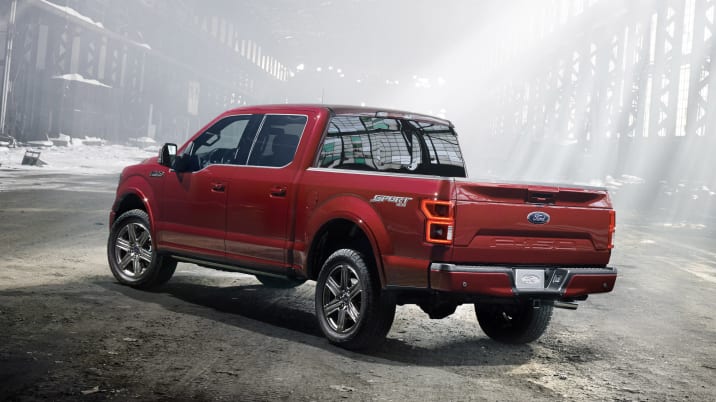 In the rear, the 2018 F-150 also gets new lighting elements, but the changes are more subtle – there is now a split between the upper and lower portion of the element, whereas before it looked to be all one piece. What's more noticeable is the restyled tailgate, which comes in two varieties. The lower trim levels will get a creased trapezoid look with F-150 embossed across the lower portion (it seems the badges weren't big enough for some people to notice). On King Ranch, Platinum, and Limited trucks, the embossing goes away and a fancy appliqué covers most of the upper portion of the tailgate. The decision to omit the embossing on those trucks apparently came late in the game, as a rendering we saw at Ford HQ had them both. The F-150's chief designer said the combination of the stamped name and shiny trim looked too busy. We agree.

The long-awaited light-duty turbodiesel V6 arrives for 2018, but buyers will still have to wait a little longer for it. This 3.0-liter Ford-developed diesel won't be available until summer of 2018, while the rest of the revamped F-150s will go on sale in the fall of this year. Ford is providing precious few details on the F-150's Power Stroke, which is a version of the Lion diesel it builds for PSA and Jaguar Land Rover products, but we can get an idea of the kind of output it will offer from other applications – in Range Rovers, the 3.0-liter twin-turbo diesel makes 254 horsepower and 440 pound-feet of torque, so figure at least that much for the F-150's version.

We do know that the diesel will come with the 10-speed automatic transmission, and Ford claims the 2018 truck will have the best tow ratings of any F-150 yet. We have a hunch they'll be achieved with the Power Stroke. The Power Stroke F-150 should be the most efficient in the lineup, beating the current 2.7 EcoBoost's maximum 26-mpg highway number. The new diesel is the F-150's first and will compete directly with the Ram 1500's EcoDiesel V6, which makes 240 hp and 420 lb-ft of torque and maxes out at 29 mpg highway. 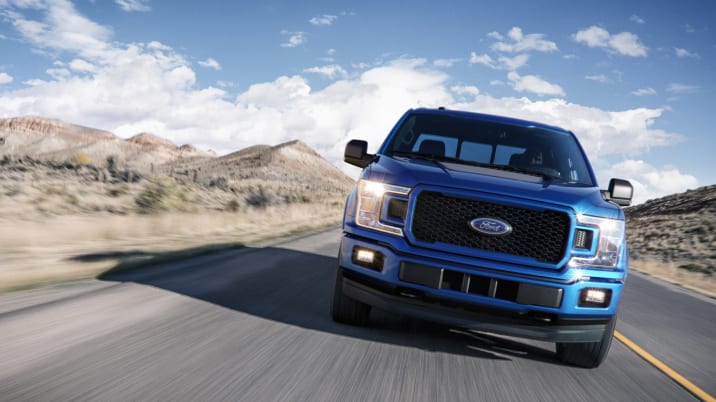 Ford is also touching every other F-150 powertrain offering in some way for 2018, with the exception of the 3.5-liter EcoBoost, which was updated for 2017 with more power and a 10-speed automatic to go along with it. The base truck's naturally aspirated 3.5-liter V6 is being replaced by a 3.3-liter V6 with port and direct fuel injection that will make as much power as the outgoing 3.5 – meaning at least 282 hp and 253 lb-ft of torque. It will be paired with a six-speed automatic, just like the 3.5 is today.

Next up is the 2.7-liter EcoBoost V6, which gets updates to produce more power and will also see a fuel economy improvement, likely owing mostly to the 10-speed automatic it's being paired with. Ford will announce those numbers later. And then there's the 5.0-liter V8, which is switching to spray-bore cylinder liners like those used on the Mustang's 5.0-liter; that will reduce weight and along with other efficiency improvements and the 10-speed automatic will lead to undisclosed power and efficiency improvements.

Ford is also updating the F-150's techie features for 2018. The available adaptive cruise control is upgraded to stop-and-go status, meaning it can bring the truck to a complete stop and pick up where it left off again in heavy traffic instead of shutting off cruise when it slows down. Pre-collision assist with pedestrian detection is also newly available, as is a 4G cellular radio with wifi hotspot capability. A B&O Play (as in Bang & Olufsen) sound system will be optional as well.

The F-150's aluminum body and box remain the same, but there are likely some other changes that Ford hasn't shared yet. We're told there's an update to the way the trailer hitch receiver mounts to the frame, which sounds as though the F-150 will adopt the stronger setup from the 2017 Super Duty. That version also includes nested sleeves to accommodate different hitch classes. The F-150 will once again be available in XL, STX, XLT, Lariat, King Ranch, Platinum, and Limited trims, and of course the insane Raptor is still in the mix as well. We'll have more information to share before they go on sale later this year.