Like the last days of the dinosaurs, Aston Martin's $294,950 Vanquish S is one of a handful of extant Tyrannosaurus Rex – few big-capacity naturally aspirated engines still bellow rage at the world in general. So, six liters, twelve cylinders, 48 valves, and no turbos; hurrah. Well, as long as you're not buying the gas.

As the delivery driver who brought this car to me observed: "Whatever I seem to do with this car, it never gives more than 14.5 mpg, where as long as you barely touch the throttle, the new DB11 gives you about 18." Aston's DB11, which debuted this year with a fresh chassis/powertrain architecture that will eventually underpin a new car with the Vanquish nameplate, is twin-turbocharged. The Vanquish S, with its extra power, is decidedly not.

It's the off-duty moments that stymie gas mileage for naturally aspirated mills like the one in this car. Dragging that huge crank, con rods, pistons, and cams around plays havoc on economy when you aren't on it like jam on toast. At full throttle, there's not a lot in it, turbo or no turbo.

The Vanquish is the most unlikely car ever to have almost not made it into production. The name was first used in 2001 attached to Ian Callum's toothsome aluminum/carbon composite coupé body, but then chief executive Uli Bez held it back for six months, officially because he didn't like the Ford Ka air vents. Unofficially, as he later admitted: "What no one wanted to hear at the time is that Vanquish was crap. I changed 200 things, and even then, it burned through gearboxes." 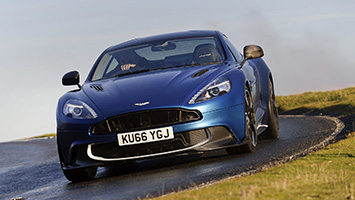 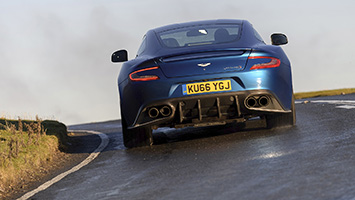 At the heart of the Vanquish then and now is a V12 engine, effectively built out of two Ford Mondeo Cleveland V6 units. It's easy to scoff at such humble beginnings, but the rumor machine elicits Porsche and Cosworth involvement in its gestation. First introduced in the 1999 DB7 V12 Vantage, the engine was then tuned to 460 horsepower for the 2001 Vanquish, which also debuted Aston's bonded-and-riveted VH platform chassis. Over 2,500 of these amazing cars were sold in standard and (from 2004) S forms, though its robotized manual transmission was problematic. As Richard Parry-Jones, Ford's then chief engineer said, "there was nothing wrong with that car that a good manual transmission wouldn't have solved."

Production of the Mark I Vanquish ceased in 2007, and while its DBS replacement was more reliable, it never recaptured the Vanquish's glamour quotient; star of James Bond films and The Italian Job remake, and name-checked in lyrics by Lil Kim and The Pussycat Dolls.

Aston Martin took some time about its revival in 2012, with Marek Reichman's all-carbon-fiber coachwork replacing the original's aluminum and, at 565 horsepower, there was more power. The carbon-fiber body, however, plays no part in the structural integrity of the car, which weighs a porky 3,834 pounds. 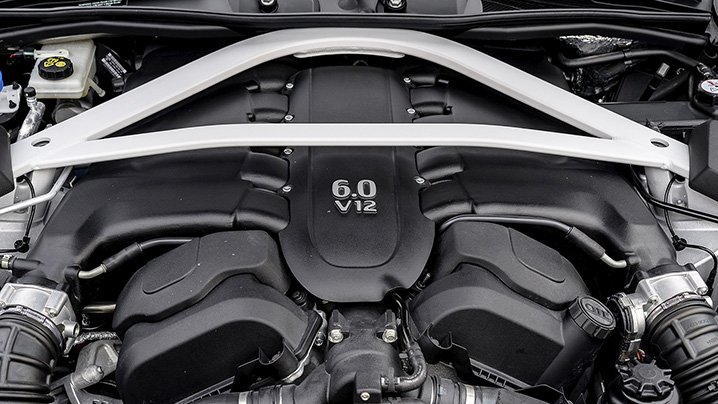 To keep the car up to date this new Vanquish S has stiffened coil-sprung upper and lower wishbone suspension all round, retuned adaptive damping, and uprated anti-sway bar bushings. The V12 now produces 580 hp at a shrieking 7,000 rpm thanks to a freer-breathing intake system, and 465 lb-ft at 5,500 rpm. Top speed is quoted at 201 mph and the 0-62 mph run at 3.5 seconds.

The eight-speed ZF automatic transmission (dubbed Touchtronic II by Aston) has been tweaked to provide faster responses and it sits in the rear transaxle with the Graziano limited-slip differential. The S rides on 20-inch five-spoke diamond-cut alloys shod with Pirelli P-Zero tires, and the carbon-ceramic brake rotors have six-piston calipers at the front and four-piston units at the rear.

Body changes are aimed at increasing downforce and visual aggression – not that, at 6 feet 10 inches wide, it lacks much in the get-out-of-my-way department. Contributing to the "meaningful increases" in downforce are a new front splitter and a race-style rear diffuser together with four huge exhaust outlets. There are flashes of carbon fiber all over the body, in fact, which, together with those swollen rear arches, confirm this car's relative flamboyance in comparison to the DB11. 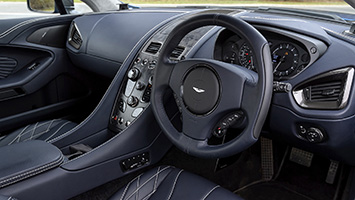 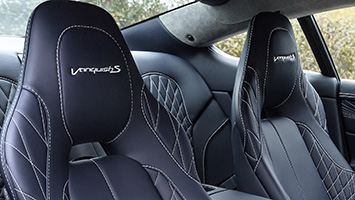 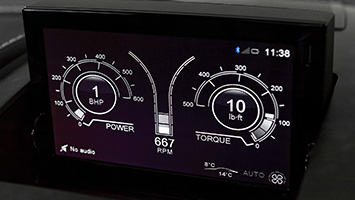 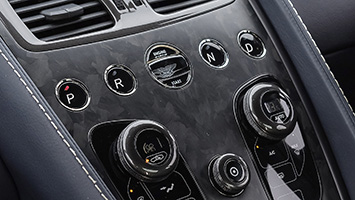 The cabin feels like climbing into a 15th century mariner's astrolabe with Daz-white lines of stitching sparking geometrically across the dark blue seats and headlining. Once over this handcrafted shock, you quickly realize that even the 'satin' finished carbon-fiber dashboard ski slope can't hide the pretty old-school Aston fascia, with its Volvo- and Ford-derived switches and strange opposite-swinging speedometer and tachometer. Bang & Olufsen tweeters rise like anti-aircraft turrets at each corner, and the door-side handbrake has a slightly confusing fly-off action. The huge screen pillars don't have rain gutters so you need to close the doors before wiping the screen or the entire rain storm ends up in your lap. The cabin is cramped and the driving position, canted over by the huge transmission tunnel, isn't that comfortable. There's nowhere to store anything much, the boot isn't overly large, and anyone suggesting you could fit two grown adults into the rear seats is a liar.

Compared with the new DB11, the Vanquish feels very first-generation, particularly the tiny screen, noisy climate control fan, and crummy navigation graphics. And that ludicrous squared-off steering wheel just reminds you that steering wheels are round for a reason. The steering rack ratio is 15:1, which makes for two and a half turns lock to lock, so the fixed gear-change paddles can disappear from your finger tips on tight corners.

Push that curious crystal key into its oblong slot and hold your ears. Neighborhood-friendly this car is certainly not. The exhausts rasp and boom on every start, hot or cold. Best get used to being the not-always-welcome center of attention in this automobile. 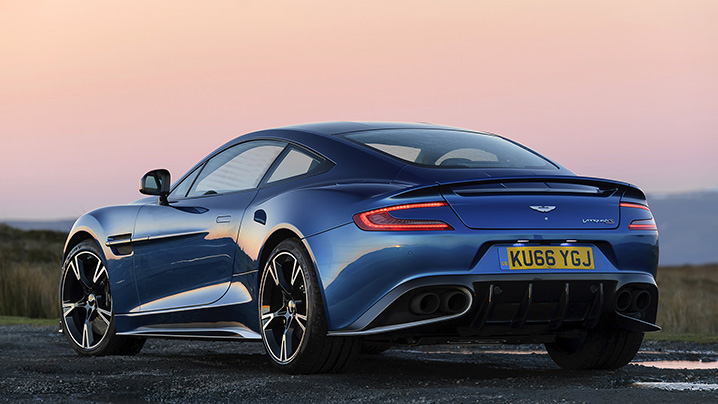 Maneuvering takes time as you select forward and reverse via the big glass dashboard buttons and wait for the electronics to clunk into gear. And finally, you're lined up, the road stretching away into infinity. Floor it and the air fills with an anguished yowl as 580 hp of unstoppable force overcomes the immovable resistance of two-foot-wide Pirellis, which instantly make smoke. With the driveline setting on Sport, throttle response is instant and actually a bit terrifying. The sound track is all T-Rex bombast, gurgling, popping, roaring, and growling, so playing tunes is hugely entertaining. And it goes, too, with a sort of whooshing acceleration that you expect of a 1.7-ton sky rocket. And while the uprated gearbox can't quite match the speedy, precise changes of a McLaren 650S or Ferrari F12, it is smooth and more than fast enough for a public road.

Come the first turn, however, and you become acutely aware of that weight as you feel just how hard the brakes are working and how much the front tires are overcoming a general disinterest in changing direction. There's a microsecond of delay before the front yaws into the turn and though it's no understeering monster, the Vanquish S is at its best on longer, faster, and more open bends. The steering is precise, with decent feedback at the wheel rim, which allows you to place the nose accurately through the turns and feel the grip threshold. And the brakes are terrific, with fine pedal feel and an astonishing, unfading appetite for work. Dial in the softest setting and the ride is firm, but reasonably comfortable for longer journeys. In the firmer settings of Sport or Track, there's a sharp choppiness to the ride, and on bumpy roads the wheels can lose traction.

By any reasonable measure, the new DB11 is the better car than the Vanquish S; it's almost as fast, more comfortable, and more modern. But don't go away thinking the Vanquish S is some glowering antediluvian monster in the shed. Its abilities might not be as well-rounded as those of the car on Aston's newer chassis, but in sheer speed, mechanical grip, and above all that thrilling V12, it's every bit a superlative gran turismo and the last of a very special breed.