Brandon Turkus
If you ever wonder why I'm always ranting and raving about The Grand Tour being at its best when the cars are the stars, tonight's mid-season Christmas episode is the perfect explainer. Aside from a goofy holiday gift section – shown above – Jeremy Clarkson, James May, and Richard Hammond played second fiddle to a pair of great segments about the Ford Mustang and Focus RS, and the legendary 1960s battle between the Blue Oval and Ferrari at Le Mans. The Grand Tour's sixth episode was everything that makes a car show great.

The Focus RS/ Mustang element asks a simple question: what's better, the all-American pony car or a rally-inspired hot hatchback. In the Mustang's corner, Americanophile Richard Hammond. In the Focus' corner, Jeremy Clarkson, who rightly posits that the rise of cars like the Sierra RS, Escort RS, and now, Focus RS is Europe's indirect response to a lack of rear-drive, V8-powered, officially-imported Mustangs. 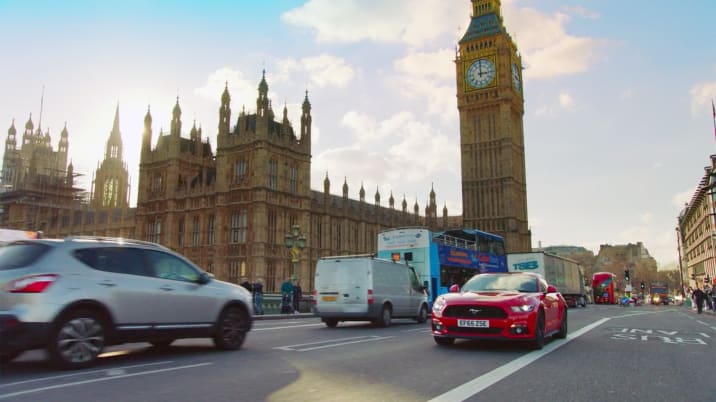 It's a brilliant segment because it's so simple. Hammond loves the Mustang and wants to show the sights to the first Mustang Ford has officially sold in the UK. Ignoring that the entire affair ends in the same staged, "surprise" arrival I complained about last week, seeing Hammond cruise across Tower Bridge, past Westminster Palace (home of Parliament, or where "we keep all our idiots," as Hammond helpfully explains), past the Cenotaph (which I took as a not-so-subtle dig at Top Gear's Cenotaph controversy), and through Trafalgar Square is cathartic for fans of American cars tired of the constant abuse from Europeans. "Here's one of our best vehicles, in Europe, and it's awesome." Then Clarkson arrives.

Frankly, while seeing these two modern American icons on screen with these TV personalities is fun, the reality is that the actual comparison between the two cars is annoyingly brief. The segment features plenty of Clarkson and Hammond arguing their respective points, before taking a break for Conversation Street. More on that in a minute. The actual regimented, head-to-head between the two cars is limited to a drag race and a lap of the Eboladrome with Mike Skinner at the wheel. 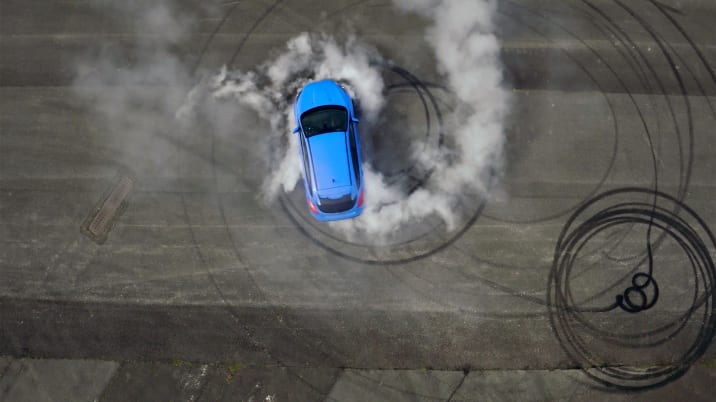 Instead, the hosts sample their cars in a "chase." It's all supposed to be very cinematic, with a cheeky sign for the British Institute of Car Chases and normal traffic on the same road. And it's fine. But would it have been so wrong to just go to Millbrook Proving Grounds and time how fast Clarkson/Hammond can get from A to B? Not only would it set the stage for more arguing between the two hosts, particularly based on the outcome of Skinner's laps, but it'd give us the same cinematic thrills as this segment with an actual dose of comparison.

Instead, Mike Skinner's all there is. I sat and watched this episode with my fiancée, an avowed Top Gear hater. This was her first time watching The Grand Tour, and it took 30 seconds of Skinner on camera for her to remark "Why is he so annoying? I really don't like him." Now, while you can question her judgment (feel free, she's marrying me, after all) if Skinner's corn-spun, down-home southern accent is bothering even casual viewers, the shtick probably isn't doing the show any favors. Whining about The American aside, comparing the Focus RS and Mustang head-to-head and on equal footing is something fans have been waiting for – the result doesn't disappoint. 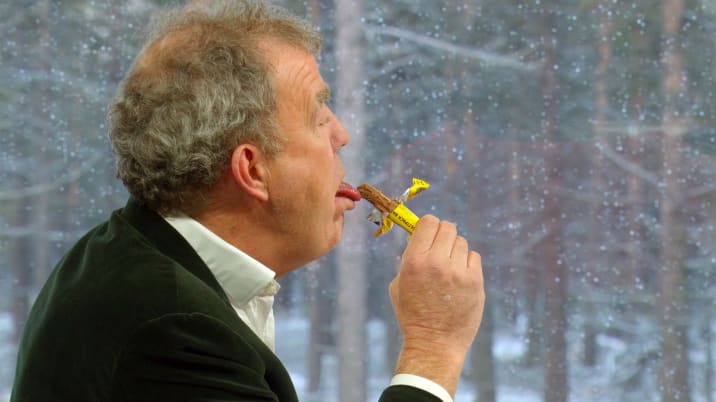 And while I wish Clarkson and Hammond spent more time comparing the cars on the road instead of simply arguing while parked alongside Stonehenge and in Cheddar Gorge, it doesn't change the fact that the entire segment with these two is entertaining. The Grand Tour's beautiful camerawork and Clarkson and Hammond's delightful delivery is a great pairing in crappy cars on straight roads, let alone two red-blooded performance models on twisting roads. The cinematography and the hosts bring these vehicles to life, even if they don't actually test them as thoroughly as enthusiasts might like.

While this week's Conversation Street was short on the news, it was big on some of the irreverence that typified Top Gear in its golden era. Starting with the three hosts in sombreros (tricky territory, indeed) the discussion covers the gorgeous cabin in the new Volvo S90 before devolving into a comparison between the messiness of Cadbury chocolates. It's funnier than it sounds.

The same is true of the gift segment. A semi-regular fixture on Top Gear, Clarkson, Hammond, and May transitioned the feature to The Grand Tour, and as usual spent more time mocking manufacturer-branded gift items and supplements for breaking bones than actually suggesting gifts. It's cheesy, but if you don't chortle at The Grand Tour condoms, you have no soul (or, at the least, you're more mature than I am). 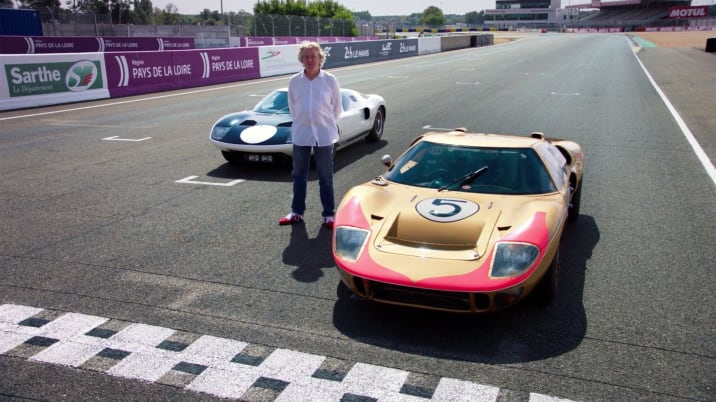 Episode six finished up with what's best described as a driving-tinged documentary. While most automotive enthusiasts know the story of Ford, Ferrari, and Le Mans, James May's narration and test drives in actual GT40 and P3 racers bring a new and enjoyable element to the action. But a big part of what makes this segment work is the nitty gritty detail May introduces to the audience. Sections about Enzo Ferrari and his purple pen, the business cards Henry Ford II handed out to his team, and Ford's dismal two Le Mans campaign before its successful 1966 race are little-known parts of the well-worn story. That said, May's Anglo-centric piece focuses heavily on Brit driver Ken Miles, failing to mention American Dan Gurney, or Kiwis Bruce McLaren and Denny Hulme, all GT40 drivers in 1966 and racing legends equal or greater than Miles in stature.

Ultimately, these are minor qualms. The Grand Tour wrapped its first half of the season up with a (mostly) kitsch-free episode that focuses on what all of us here love – cars. With six more episodes in The Grand Tour's inaugural season, I hope this episode represents a righting of the ship after an inconsistent start.