Reese Counts
The Basics: Hyundai is recalling 41,264 2007-2008 Entourage minivans because the hood latch may corrode, causing it to open while driving. The recall affects every Entourage manufactured between February 16, 2006, to June 30, 2008, though the fix varies depending on the state.

The Problem: The secondary hood latch can corrode, meaning the hood may not close properly. This could cause the hood to fly open while driving and causing an accident. Based on the states where the van is recalled, it seems to be an issue related to rust.

Injuries/Deaths: None, though the investigation into the recall was prompted by several incidents where the hood latch malfunctioned.

For Entourages in other states, dealers will inspect, lubricate, and, if necessary, replace the latch. 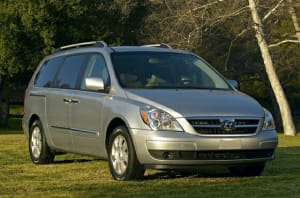