Ryan Tuerck on what it took to rip a 700-plus-hp BMW M3 sideways.

Carter Jung
A green 2005 BMW M3 tears across the concrete floor that's showing its age from green veins of overgrowing vegetation. The snarl from the E92 M3 reverberates between the rows of empty five-story barracks packed into the former Cold War-era Russian military base. A supercharged GM LS engine roars under the hood of the German car. Howling after it are another BMW M3 and a Nissan 350Z, both powered by LS engines that have been supercharged and turbocharged, respectively. It's been years since the abandoned walls have trembled with this kind of energy.

Pop, pop, pop! The lead car backfires with the sound of an AK-47 as it downshifts. The driver rotates the front wheels, and the weight of his vehicle shifts and transitions into a tire-shredding drift. The chase cars follow suit, yawing dangerously close to the emerald Bimmer. Sounds like a scene out of a Bond or Bourne film? It's not. It's seasoned Formula Drift driver Ryan Tuerck and drifters-in-arms Kristaps Bluss and Matt Powers, hooning on former USSR grounds in what is currently Latvia.

The best part of the Donut Media-produced video? Besides the "Big Girl" audio track by Stella Mwangi that's wormed its way into our collective ears, its how much fun the drivers look like they're having. Something that's extra noticeable courtesy of the lax safety regulations in eastern Europe (read: no helmets required). The shortage of FIA-approved safety equipment aside, more car videos should take themselves less seriously. 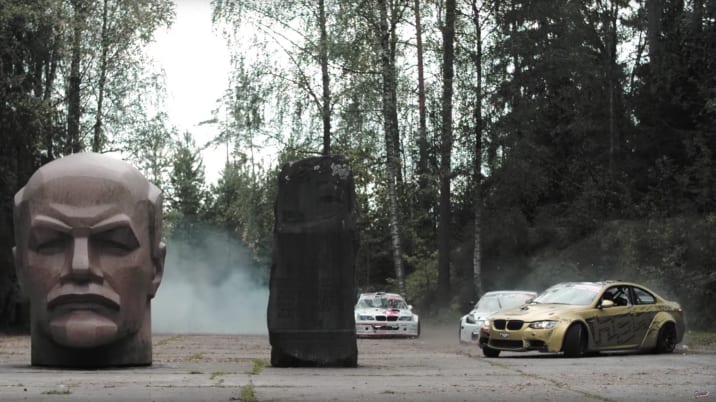 We chatted with Ryan Tuerck to discuss the group's vehicular follies, but before you read the account, watch the video first. Consider that our spoiler alert.

Carter Jung: An abandoned Russian Army base? A derelict Cold War nuclear launch site? Driving on set without a helmet? How did you find the most epic of international hooning venues?
Ryan Tuerck: I got an invite from Kristaps Bluss of HGK Motorsports to come to Latvia, his homeland, to shoot a video for the shop's 10-year anniversary. I really didn't know what I was signing myself up for, but when you're going out with a group of talented friends it doesn't matter what the plan is.

CJ: Did you pack a Geiger counter?
RT: I didn't know to take one, but maybe I should have. [laughter]

CJ: As amazing as the setting was, the roads seemed like they were in less-than-ideal condition.
RT: Besides the vegetation growing on the roads, the missile launch site was actually in great shape. The surface on the old Russian base, on the other hand, was super beat, making it tough to find areas where we could film. We had to spend a little more time getting creative with the shots.

CJ: Any locals show up concerned that the machines of war were being turned back on from the pluming smoke from your tires?
RT: Nobody showed up to the military base, as it was far off any road. It was literally in the middle of nowhere. The missile base was active with trucks from a couple of businesses that rent land from the government. Some of those guys stopped to check things out but they didn't say much. We were so pressed for time we barely noticed them, though. 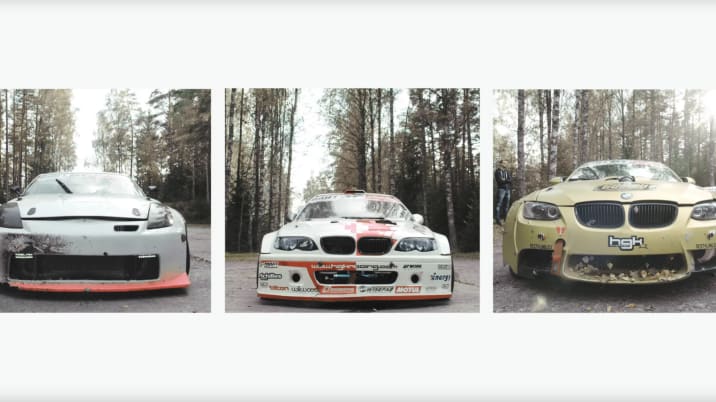 CJ: The smoke machine isn't the 2013 Toyota 86 you compete in Formula D with. Where did you source the ride?
RT: The E92 BMW M3 was supplied by Kristaps and his awesome dudes at HGK motorsports.

CJ: Was it set up to your liking?
RT: It was easy to drift. The BMW had plenty of steering angle and power from the supercharged LS motor making 700–800 hp. For filming, I like to set the car up loose so it can slide easy and is more forgiving. If the car was set up super tight like we do for competition, any missteps on the tight, skinny roads could've ended our filming day pretty quickly.

CJ: In the reverse tug-of-war at the beginning of the clip, which Bimmer won the Bavarian shoving contest?
RT: Kristaps won the match. The engine in my car was brand new so I didn't want to blow it up or overheat it, so I let off like a chump.

CJ: Very gentlemanly of you. How many days was the shoot?
RT: It was only two days. We had only one day at each location. 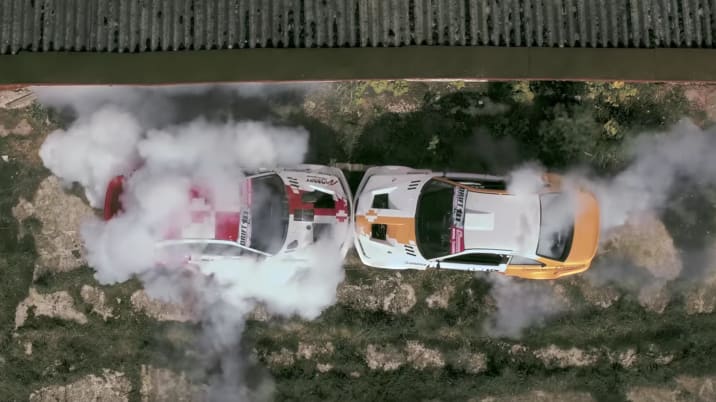 CJ: Wow, that's a tight timeline. Were you able to do a lot of prep?
RT: The only prep the Donut Media film crew, Matt, and myself had was getting up early and hauling ass to the location so we could do a quick scout. In other words, it was all improv. That's sometimes the best. You get some of your best ideas under pressure and the Donut crew has plenty of experience running and gunning for shots.

CJ: What was the most difficult shot?
RT: The triple tandem stunts. Trying to stack up three cars super close to each other on such tight roads got a little sketchy at times, but, thankfully, we didn't cause too much damage to the cars.

CJ: Any gnarly moments?
RT: During the triple tandem shot when I was leading, I hit some vegetation on the road and the car started sliding like it was on ice. I was heading for a tree off the side of the road, but, luckily, I caught a piece of bare pavement giving me enough grip to steer back on to the road, unscathed. 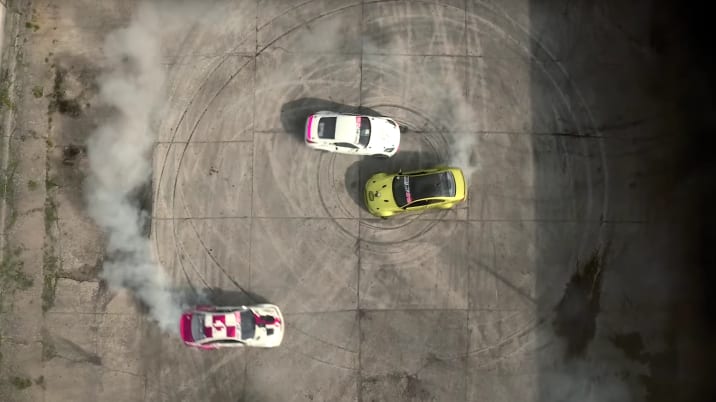 CJ: Any other challenges to the shoot?
RT: Just being pressed for time. The missile base was so big with so many cool roads that we couldn't see it all in the one day. We had to start shooting immediately, so we had to focus on certain sections and came up with a quick shot list of what we wanted to accomplish.

CJ: How'd you guys pick who got to execute the flying 360-degree donut?
RT: We roshambo'd for it. Just kidding. [laughter] That's a Matt Powers thing he borrowed from Sam Hubinette back from their Formula Drift days. Matt made the 360 drift a thing with a video he did at Willow Springs, so that was his stunt to do.

CJ: The Adidas track suits were a nice touch, Gosha Rubchinskiy would be proud. Any Cold War moments from the trip, besides nearly colliding with the massive Lenin bust?
RT: We didn't see anything too crazy cruising the countryside of Latvia, but there were a bunch of speed cameras we didn't know about on the highway. After we got back to the States, Kristaps sent us pictures of the van we drove and a bunch of tickets! I think we totaled 500 euros worth of fines. [laughter]