A visit to Calabogie Motorsport Park.


We arrived late Friday afternoon the day before and completed our enrollment for the event. I spent about an hour or so placing our number and various sponsor decals at various locations around the car. If you squinted, the near-stock Mustang almost looked like a race car. 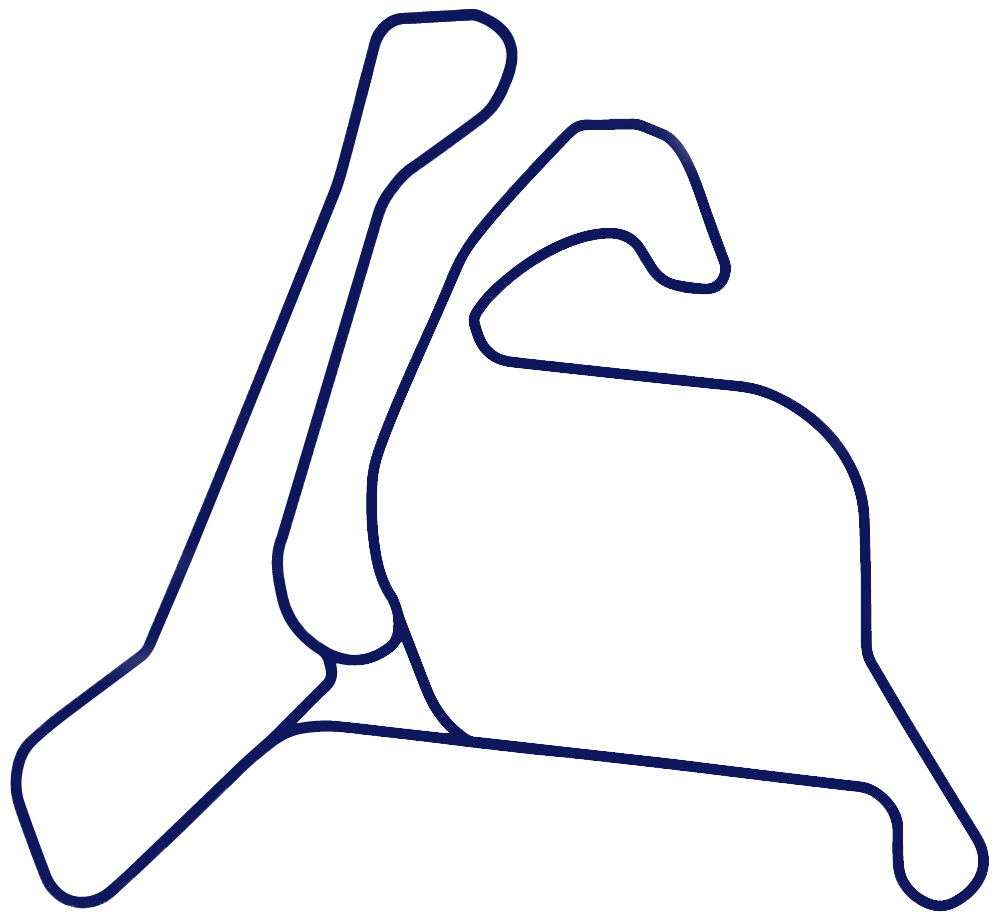 As the website says, "This world class facility is home to the longest track in Canada, at 5.05 km in length, consisting of 20 turns, measuring 40 feet wide, and featuring a 2,000 ft long straightaway".
Since this was my first visit to Calabogie, I was encouraged to take a couple of familiarization runs in the passenger seat of couple of drivers' cars. Even though I'm not a huge fan of being a passenger with an unknown driver barreling around a racetrack (and I wouldn't recommend it if you suffer from motion sickness), I appreciated the experience. The first driver I went with was by his own admission a rank amateur, but he had an awesome track car –a 2003 Corvette Z06. He drove with great bravado, throwing the car into corners, accelerating briskly, braking hard, and experiencing big g forces. I observed that he was almost 'over-driving' his car. The wild changes in acceleration, turning and braking forces almost pushing the car out of control. Despite being on the ragged edge, it didn't seem to me as though he was actually going that fast, despite my unfamiliarity with the big track. My second ride was with in a Scion, with probably no more than half the horsepower of the 'Vette. I watched the second driver much more intently. He was much smoother behind the wheel and the car felt so much more balanced and in control. To my mind he was faster than the Corvette, and this was confirmed by my stopwatch. This guy knew what he was doing! It was just my luck that I was driving with the guy who came in second the previous year and ultimately won the event in 2016.

After the morning drivers meeting and briefing about the track, I got to do some warmup laps -my first time on the track. Fortunately, it was the short version, which turned sharply to the right after the main straight and was on the eastern side of the track; there was less to learn immediately. The longer version has the long 2,000 ft. straight after the opening sequence of turns. I learned that the corners are very challenging and finding the optimal line through any of them was going to take me more time than I had at the opening of the event. I also learned quickly is that there were some very quick cars and drivers out there and it was clear that we were going to be outmatched. Even though drivers were released from the pits in relatively evenly spaced and comfortable intervals, the quicker cars made up the gap within a lap or two. I was waving people past me on the straights regularly. I attributed this performance, at least partially, to my novice status and unfamiliarity with the track. When I handed the car over to Duncan for our first official time attack laps my fear was confirmed. Duncan put in some very good laps, but the car had its limitations. Even with upgraded rubber, the car still understeered heavily, but predictably. The staggered wheel configuration did not allow the rear end to break away a bit under acceleration. With the 435 hp. we had to work with, a square setup would have been preferable. If our supercharger kit were still mounted, power would have been over 600 hp. and the stagger would have worked better -just like it does on the Shelby GT 350 with similar power. The car felt great to drive, just too slow relative to the competition. We were 18 th out of 25 teams after the first set of time attack runs.

Duncan didn't want to do the auto slalom events. This would apparently have to become my specialty. I had only done something similar once before. I also had a little experience with cone courses at various motorcycle training courses I went on -not much preparation for this kind of event, so I would have to do some serious on-the-job training. 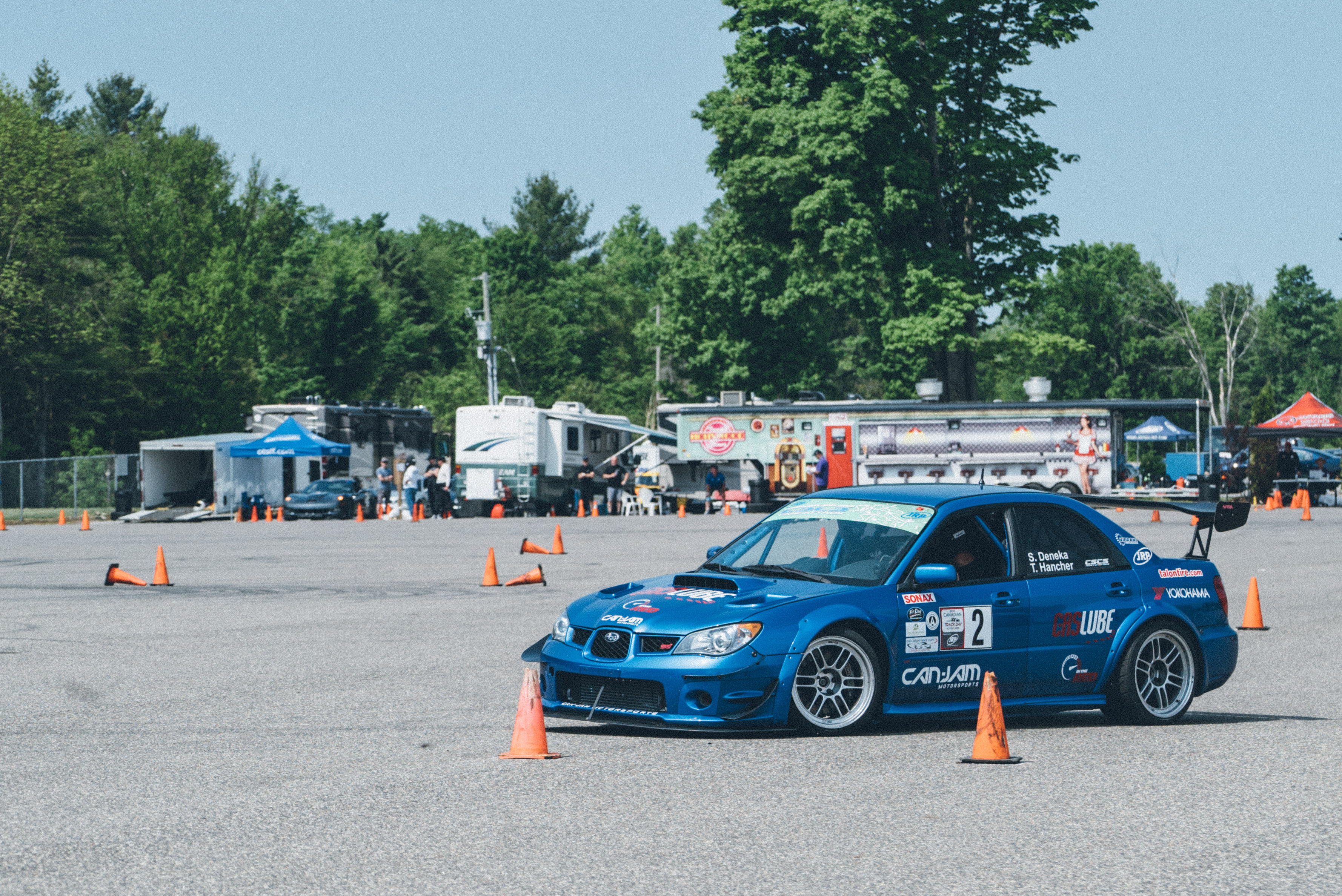 We were led around the cone course built in the Calabogie parking lot. Some turns appeared well-defined; others were just a series of three cones laying on their side, pointing the turn direction. Next we jumped into our cars and did a couple of 'parade laps' around the course to make sure everyone got it committed to memory. Each of us then got in a line behind the starting line. As each car was brought up to electric eye at the start, we watched each driver attack the course. As many of us discovered, parade laps and full-on attack are two different things. Some got through, tires smoking and screeching, others missed a gate or two and got an "X" beside their time. All times were posted on the board at the starting line. As my turn came up I realized that here was my chance to drive this car quickly – I mean ­like cop-school quick for about a minute, through a tight twisty road course, never getting out of second gear, maybe challenging third occasionally. This was going to be a blast! I shot out of the gate, tires screeching and scrabbling for grip, and around the first left and right up a long straight to the next set of turns. Through the next sequence of turns – no problem. Then I missed an easy gate right in the middle of the course and turned the wrong way – just came up to fast for my reptile brain to process. When I came up for the second run, I saw the red "X" next to my number.

The second run was more conservative. I came of the line easily and blasted up the long straight, same as the first run. I missed the same gate in the same place and came to a screeching halt trying to repair the mistake; "XX – Dos Equis". I finally completed a successful turn on my third and final attempt. I made it through with a time of 43.577 seconds, good enough for 23 rd out of 24 teams. At least I wasn't last...
X