Everything we know about the 2018 Mercedes-Benz X-Class November 28, 2016: Australian automotive publication Motoring breaks the news that AMG has no plans to offer a high-performance version of the X-Class pickup truck. A representative from Mercedes-Benz also confirmed with us there were no plans for such a vehicle, though the company didn't rule out the idea entirely. Instead, the representative said the company will wait to see how the truck is received in the marketplace. As a result, the only powertrains Mercedes will offer with the truck are a Mercedes diesel V6 with 4MATIC all wheel drive, and the range of Nissan four-cylinder engines and drivetrains from the Navara.

October 25, 2016: Mercedes reveals the X-Class concept. The company showed two versions of the truck, a street-friendly model in white, referred to as the "stylish explorer," and an off-road oriented model in matte yellow called the "powerful adventurer." The white model featured large wheels and a wraparound tail light cluster on the tailgate. The yellow version had knobby off-road tires, carbon fender flares, and a winch. Mercedes also announced that the primary markets for the truck include Latin America, Europe, South Africa, and Australia. No plans for the US market were announced. The truck is based on the Navara NP300 from Nissan, and will share the chassis and 5-link rear suspension of that truck. Mercedes will also offer its own V6 diesel engine coupled with 4MATIC full-time all wheel drive on the X-Class. 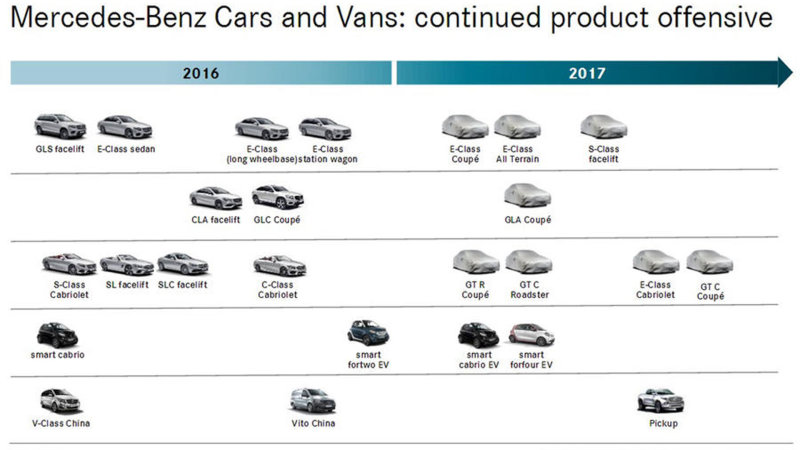 July 25, 2016: Autocar finds a leaked product road map from Mercedes reveals an array of upcoming new models for the brand. Among them is a nameless pickup truck. The tentative production target is sometime in 2017, and further confirms Mercedes-Benz's intention to enter the truck market.

January 27, 2016: Australian automotive publication CarAdvice reports a rumor that the Mercedes pickup truck will be powered Nissan's four-cylinder engines. It also reports that Mercedes will offer a V6 and all wheel drive. The publication also expects pricing to range between 55,000 and 80,000 Australian dollars, or between $39,000 and $57,000 at then-current exchange rates.

April 8, 2015: Mercedes-Benz and Nissan-Renault announce their collaboration on the unnamed pickup truck. The truck will feature a four-door double-cab, and will share parts with the Navara NP300 pickup truck from Nissan. Both trucks will be eventually be built in Argentina and Spain.

March 27, 2015: Mercedes-Benz announces it will enter the midsize truck market by the end of the decade. The company announced it will build a truck, and its van division will direct the vehicle's development. Few details were given by the company aside from its announcement of intent.