The 2016 Formula 1 season ended with a bang that came from a direction no one expected. Lewis Hamilton put his Mercedes-AMG Petronas on pole position and then got away clean to start the race. Teammate Nico Rosberg did the next best thing, lining up in second and following right behind Hamilton for most of the race. Other than Rosberg's wicked pass on Red Bull's Max Verstappen to retake second place on Lap 20, things stayed all quiet at the front.

Come Lap 32 of the 55-lap race, however, observers began to wonder why Hamilton was driving so slow. The Brit, working every trick he could think of to win the Driver's World Championship instead of just the race, dogged it out front trying to push Rosberg back into the chasing mix of Red Bulls and Ferraris. Over the next 15 laps Hamilton's race engineer repeatedly radioed ideal lap times. Hamilton only occasionally hit the times until finally saying, "I suggest you let us race." When the one-stopping Sebastian Vettel blasted his Ferrari from sixth to third, nosing up to Rosberg's gearbox, Mercedes team honcho Paddy Lowe got on the radio to instruct Hamilton to go faster. Hamilton replied that if he wasn't going to win the championship he didn't care about winning the race. 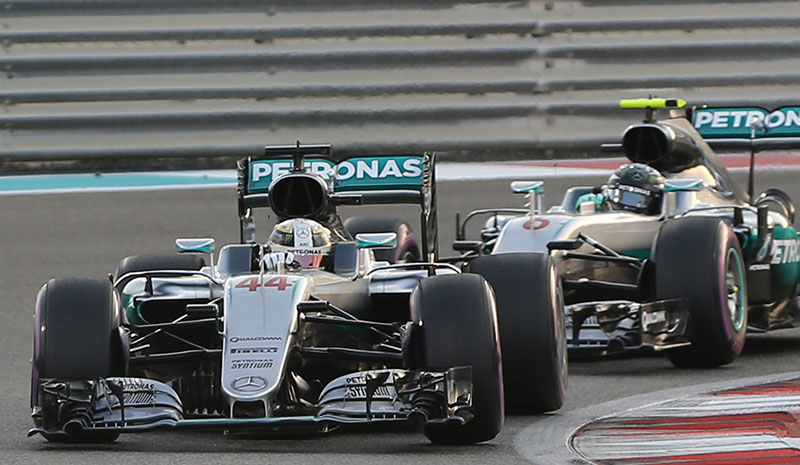 Hamilton repeatedly zoomed through the first sector to keep everyone behind, then clogged up the works through Sectors 2 and 3. The problem with his plan was that the Red Bulls in fourth and fifth couldn't get close enough to threaten the trio at the front; even if Vettel had got by Rosberg, Rosberg would still win the Championship with a third-place finish. 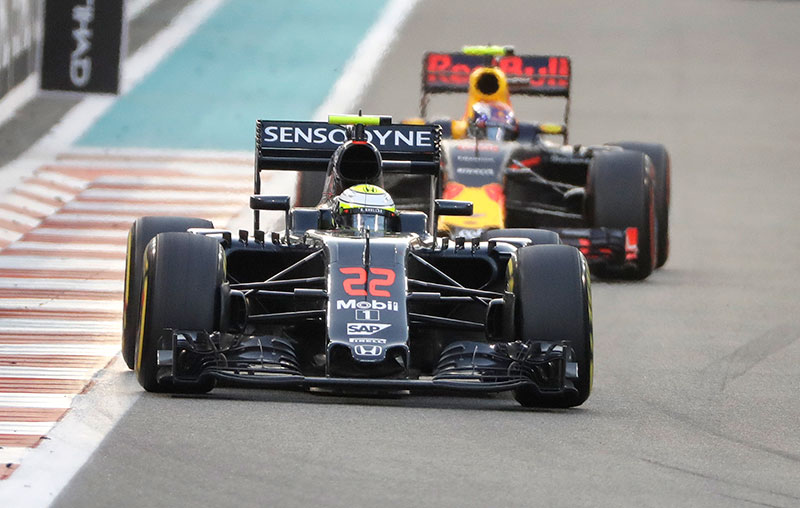 As it happened, Rosberg finished second behind the disconsolate Hamilton. Vettel took third, followed by Red Bull drivers Verstappen and Daniel Ricciardo, then the second Ferrari piloted by Kimi Räikkönen in sixth. Nico Hülkenberg took seventh, beating Force India teammate Sergio Perez for the last time as an intra-team rivalry. Felipe Massa closed his F1 career with ninth place in a Williams chassis that he got to take home as a gift from the team. Fernando Alonso scored the final point for McLaren, a touch of sweet for the team after the bitterness of Jenson Button retiring on Lap 12 with suspension damage. 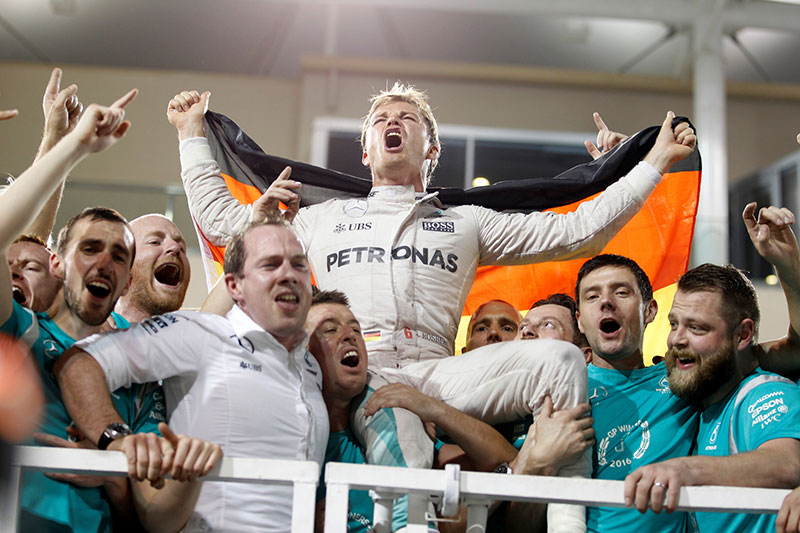 Rosberg's second place earned him 385 points for the season, enough to take the World Driver's Championship from Hamilton by just five points. Some have put the title down to Rosberg's consistency, others to his car's reliability. Other F1 drivers have sacrificed the silverware to the gods of busted pistons, but no matter the cause, the man with the most points after the last race wins. Congratulations, then, to Nico Rosberg. Ricciardo sealed third in the Driver's Championship, ahead of Vettel, Verstappen, Räikkönen, Perez, Valtteri Bottas, Hülkenberg, and Alonso rounding out the top ten.

On the Constructor's side of the fence, the Force India put an exclamation point on its best-ever fourth-place finish ahead of Williams, McLaren, and Toro Rosso in seventh. The American rookies known as Haas F1 clinched eighth ahead of Renault, Sauber, and Manor. Even if Haas hadn't scored 18 of its 29 points in the first two races, the team still would have placed eighth thanks to points in three more races over the season. Not a bad beginning for the boys from North Carolina. 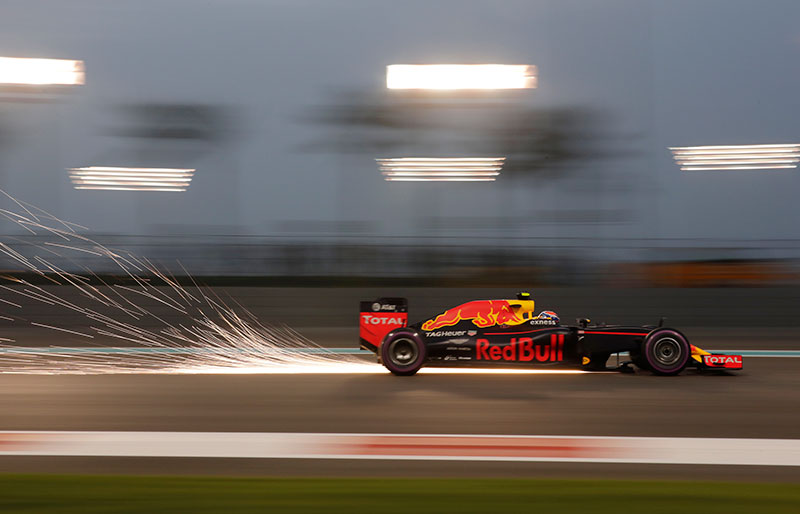 The sport faces a long, full winter with big changes coming for 2017: a new aero formula taking precedence over the current engine formula, wider Pirelli tires, and freer in-season development thanks to the end of the unloved token system. We can expect Mercedes to have a good car next season. Nevertheless, seeing what Red Bull managed this year with a clearly inferior Renault engine compared to Mercedes and Ferrari. With legendary designer Adrian Newey still drawing the Red Bull, they could make the biggest splash in 2017.

The driver's market is nearly settled. Sauber has one open seat, Manor has at least one and perhaps two depending on whether the small team retains Pascal Wehrlein or Wehrlein takes that Sauber seat. Jenson Button leaves the field after 16 years in the trenches, rookies Stoffel Vandoorne, Lance Stroll join the ranks, and virtual rookie Esteban Ocon joins a powerful Force India team after nine races with Manor. The fates of Felipe Nasr and Esteban Gutíerrez aren't yet decided. 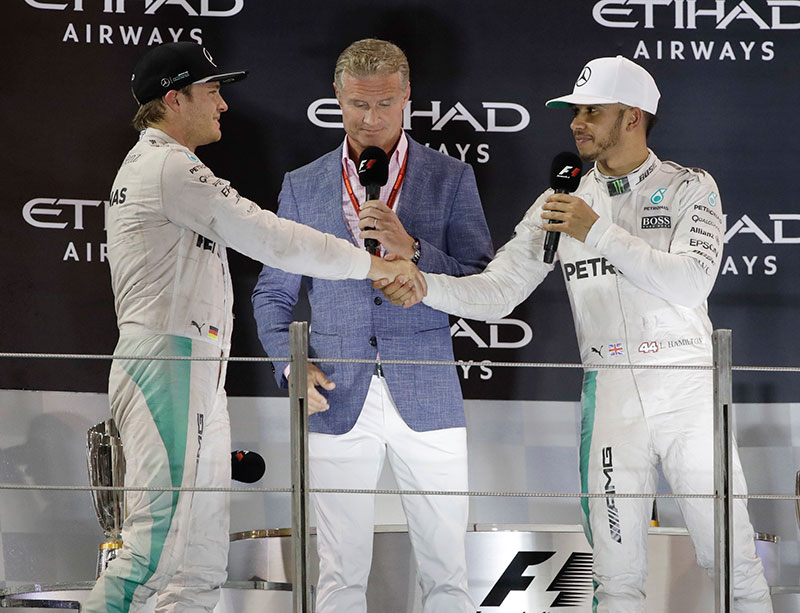 It took 11 seasons in the sport, but Nico Rosberg becomes the third German to win the Driver's World Championship. Now he's got all winter to decide whether he wants to adorn his 2017 Mercedes-AMG Petronas chassis with his regular number 6 – the same number his Championship-winning father Keke used in 1982 – or the number 1 accorded to the reigning world champion. Most importantly, he has four months to figure out how to deal with a teammate who'll be hungry to avenge this season's near misses.