How and why Jaguar designed an electric SUV

Ian Callum traces the lineage of the most important Jag since the E-Type.

Brett Berk
Adrian Belew, front man of famed progressive rock band King Crimson and collaborator with Bowie, Zappa, and the Talking Heads, released a prescient song in 1982, but we didn't know exactly how prophetic it was until this week. The song was titled Big Electric Cat, and its lyrics seemed to predict nearly 35 years ago the unveiling of Jaguar's first all-electric vehicle, a production-ready crossover concept with the not-so-ingenious name, I-Pace.

At first glimpse of the I-Pace, you may not have precisely the same feeling of disintegration as the roadbed Belew mentions, but there is no denying that the new Jag is important for the brand. Flush with investment from its corporate overlords at Tata, the company is on its most robust product offensive ever, rounding out its lineup to become a full-range manufacturer, investing in autonomous driving and projective head-up technologies, nearly doubling global sales, and now going electric.

"This is probably the most important car since the E-Type, I really mean that," says Jaguar director of design Ian Callum. "And when we get this car out into production and it gains recognition and popularity, I think history will show it's a significant step for the brand. Not only because we're embracing the future, quite openly and honestly, but because we're going to beat the rest of them. Tesla is there already, but none of the rest."

As a challenger brand – one not in the top of mind consideration set like rivals at Mercedes, Audi, or Lexus – Jaguars are made or broken on this kind of differentiation. The I-Pace is certainly distinctive, and looks like nothing else on the road. Like many contemporary Jaguars, its rear three-quarter view is its most compelling, with the slender half-round taillights inspired by the legendary E-Type that were first revived on the F-Type and have since become a signature. But here, the rear end is shaved off and in an angular concavity that seems an effort to take as much mass as possible out of the back, and one that echoes elsewhere on the vehicle: in the scalloped sides, in the continuous path of glass from the base of the front windshield to (almost) the base of the rear liftgate. But especially in the foreshortened and deep-nostriled hood. 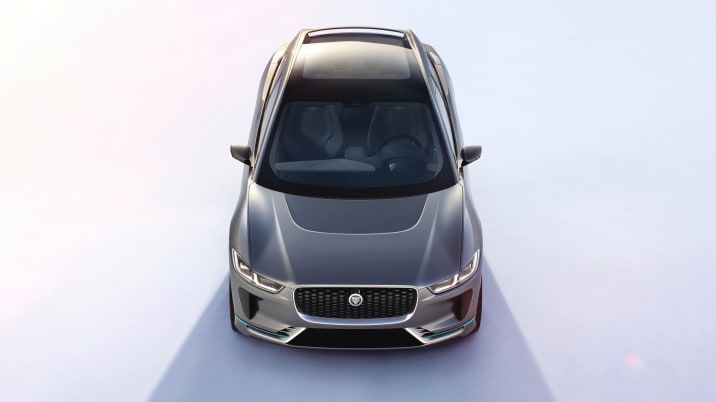 "I see excitement in the profile of cars, so long as you have some extremity in some way – you can have a long hood or a long bonnet," Callum says. "We went for the cab forward because, without an engine up there, we could – it gives you more space inside and it's more honest. But also you have to get that sense of drama and tension. Whereas a conventional car, with the engine in the front, you throw all of that toward the rear, we've thrown it toward the front, much the same way as in a mid-engine car. That really was the inspiration for this, to try to capture that sense of speed in an original way."

Huge 23-inch wheels seem to be there not only to provide clearance, but to offset the visual mass of the lower portion of the body, important in an electric crossover, given the additional physical and stylistic heft required by the placement of the large battery pack in the floor. The undulating beltline seems here as part of the same effort.

"I had in my mind for a long period of time to take something as normal as an SUV and turn it into something that's dramatic and cool. Because on the whole, they tend to be very vertical things," Callum says. "To get the mass out of that verticality, you just make sure all of your lines go horizontally. When we're creating something, we start with pencil and paper. And you have to make sure you're not drawing things in a geometric way, you're drawing them in a linear way. And that way, you can really get some visual speed in it. It's easier to do it in a car like this because you're not constrained by hard points the way you are in a conventional car."

The most interesting challenge for a vehicle like this, and for Jaguar, is how to communicate design identity. Brands like Hyundai or Kia can reinvent themselves however they desire; their history, what little there was, has decomposed. Brands like BMW and Mercedes can rely on a history of driving passion and unerring luxury, respectively, to transcend new developments. Even Audi has less reliance on its direct history today than a reputation for technical excellence. But Jaguar lives and dies by design: distinct and distinguished, sophisticated, elegant, British, yet also sporting. Callum has been genius in interpreting that heritage, without pastiche or retro-modernism, for the modern era. As such, he's not concerned with slavish devotion to the past.

"I don't think it matters. I think people get hung up in this too much," he says. "My philosophy remains the same. You take each line, it's a beautifully executed line. You take each surface, and it's simple. It's the drama and the presence of the car that is all- important to Jaguar, and this idea that they have to be identical throughout their lives is nonsense. And we've proven that time and time again. I never had a problem with that. As long as we keep that sense that it's our job to do what's right, I think we'll be okay. And as I tell everybody, 'I've got the clay model. I do what I want.'"

If Callum has done his job well, the response to this new car should be something like the one predicted by Belew.

But he's not familiar with the song. "I know Adrian Belew from King Crimson, but I [can't] recall that song – 1982 was a long time ago,'" Callum says. "We must bring this back, bring back the cat."