The reasons why are fascinating.

Alex Kierstein
Every year since 1975, the EPA releases a summary of fuel economy and emission data called the Trends Report. The latest version, released this week, covers data compiled for the 2015 model year. We've already summarized the emissions part of the report in an earlier article, but we wanted to take a close look at the fuel economy portion to gauge the impact of increasing SUV and truck market share in the US. The surprising result? It's not hurting the averages as much as we'd have guessed.

If you consider trucks, SUVs, and crossovers as a group, they combined to achieve a record 38 percent of the all vehicles sold in the US. These large vehicles managed to not tank the averages for a few reasons. To begin with, pickups had a relatively huge 0.8 MPG increase from MY 2014, the largest increase in economy for any vehicle type in MY 2015. That means that trucks are almost as efficient as they were in MY 1986, when trucks were less powerful, smaller, considerably lighter, and much less capable. 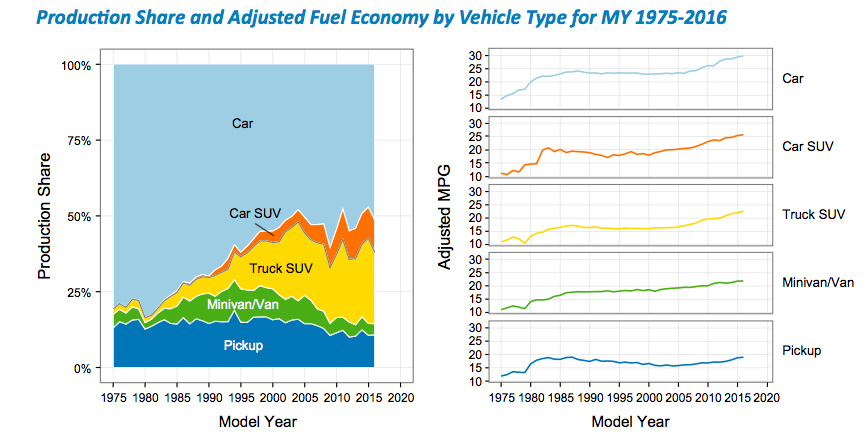 This is despite the trucks growing in size and power. The average footprint of pickups has ballooned by nearly 4 percent since 2008, which is a huge increase compared to 2 percent in cars and less in SUVs and crossovers. Despite being larger, the average weight of new trucks fell by a remarkable 110 pounds between MY 2014 and MY 2015. The increased number of pickups sold in MY 2015 negates this somewhat, but it's proof that weight reduction is making a real impact.

A quick note on figures: The EPA uses what it calls an adjusted fuel economy value for this report. It's calculated using the same test cycle that produces window sticker results, but weights the city and highway components differently. It yields figures that are roughly 20 percent less than what that the EPA uses for compliance purposes, but is allegedly a more realistic measure of economy.

The report also highlights a few very interesting trends. In the past, new technology was generally used to increase vehicle capabilities: payload, engine output, et cetera. In the past few years, manufacturers have leveraged technology to continue to improve utility and power, without a corresponding increase in weight. That's why the average horsepower output of all MY 2015 vehicles is unchanged, at 229 horsepower, despite an increase in fuel economy and a decrease in emissions. This is also due to a proliferation of advanced engine technologies, like gasoline direct injection, turbocharging, and cylinder deactivation. The tradeoff with these technologies is increased cost, but that's not addressed in the EPA's report.

On the advanced fuel-saving technology front, there's a remarkable gap between the haves and the have nots. Companies like Mazda utilize direct injection in nearly 100 percent of their vehicles, while companies like Toyota and Nissan are hovering right around zero percent. This doesn't necessarily mean that these companies are suffering for it; Nissan is ranked third behind Mazda and Honda in MY 2015 adjusted manufacturer fuel economy ratings, while Toyota is mid-pack ahead of high-tech Mercedes-Benz. But it raises the question of at what point the lack of investment in advanced fuel-saving and emissions technologies will catch up to these companies and prove a major hinderance. You can view these technology trends in the fascinating graph below, which discusses tech adoption in MY 2016 vehicles. 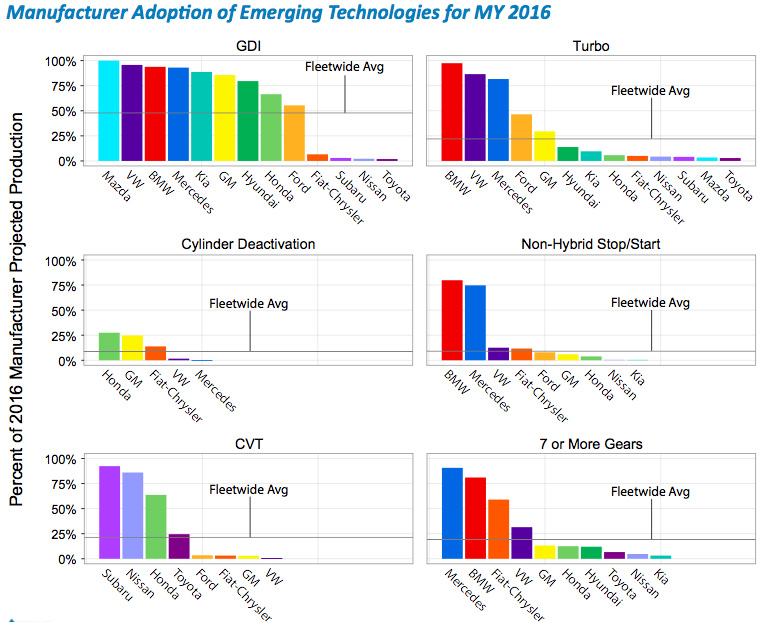 The EPA predicts that both emissions and fuel economy numbers will improve in MY 2016, although the agency acknowledges that this is not guaranteed due to the volatility of gas prices and other market conditions. It also predicts that average vehicle weight will drop by 50 pounds, and average engine output will remain steady at 229 hp. The overall truck share might drop, too, if current market trends continue.

What's the takeaway here? Basically, things aren't as bad as they could be, considering the record number of trucks and SUVs being sold. Technology and light-weighting are basically propping up emissions and fuel economy averages in the face of otherwise troubling market trends. Want to read the report for yourself? Check out the Executive Summary here. (Opens or downloads a PDF file.)