You might have lusted after this one-of-a-kind car at an auto show. We did. When Ford took the wraps off of the GT, F-150 Raptor, and Mustang GT350R at the 2015 Detroit Auto Show, all three were painted in the stunning shade of Liquid Blue. The color, which is the official hue of Ford Performance, also made it onto a Focus RS and a Fiesta ST to make a matching lineup for the auto-show circuit. We drooled and were disappointed to find out that Liquid Blue would only be available on the GT. Here's how one extremely lucky individual, who just happened to be in the market for a Fiesta ST, managed to snag the one-off model from the auto show.

You may have read part of this story from the car's new owner, Keith, who wrote about it on Oppositelock under the name quite98. What ended up being the one-off 2015 ST showed up in an online search in the Nasvhille area with only 57 miles on it, and it was cheaper than buying a new ST. As Keith points out, the pictures weren't very good and the car was listed as being finished in Performance Blue, plus it had a non-standard interior. "What piqued my interest, though, were the seats: white and black leather Recaro with black inserts," he wrote.

Ford aficionados will recall that the Fiesta ST's Recaro seats are only available in Smoke Storm (gray) or Molten Orange, while other touches like the Alcantara steering wheel with white contrast stitching aren't found on the production-spec model either. 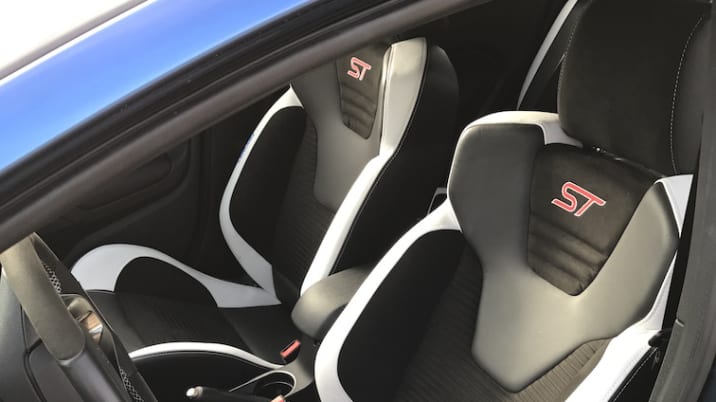 After realizing that this wasn't an ordinary Fiesta ST, Keith ran a VIN check on the car and found that Ford Motor Company was listed as the original owner. With his hunch that this was the car from the auto show confirmed, Keith contacted the Nashville dealership with an offer, but the deal didn't go through. As luck would have it, the car later ended up at a Ford dealership that was only 10 miles from his home. He went to the dealership, sealed the deal, and drove the car home the next day. The story basically ends there: He got the car he wanted in a unique color for a good deal.

But we wanted to know how the car made it from the auto-show floor to the hands of a dealer. Concepts and one-offs don't usually just fall off the back of a truck. So we contacted Ford to see if the automaker really did sell the only Liquid Blue Fiesta ST in the world. Matt Leaver, a spokesperson for Ford Performance, confirmed to Autoblog that the Fiesta ST from the auto show was sold at a dealer auction after its show run was over, like a lot of the other regular production cars you see on the circuit. It is in fact the real deal.

Keith clearly ended up with an exceptional car that he plans to drive regularly. But, as he told Autoblog in an email, he's concerned that Ford will tell him that the vehicle wasn't supposed to be sold. Hopefully this clears that up, as this mythical, one-of-a-kind hatchback deserves to be enjoyed. And if you're willing to look, there's probably a Focus RS out there somewhere that matches.