The engines are more powerful and fuel-efficient than the current V6 units. Mercedes-Benz unveiled four new engines, including a gasoline-powered 3.0-liter inline-six, a diesel variant of the 3.0-liter inline-six, a 4.0-liter twin-turbocharged V8, and a twin-turbocharged 2.0-liter four-cylinder. The gas-powered inline-six and the new V8 will power the 2017 S-Class when it gets its facelift, while the automaker is still figuring out where to place the other motors. Mercedes confirmed to Autoblog that the new V8 will be sold in the upcoming S-Class in the US, but the automaker doesn't plan to sell a four-cylinder S-Class here.

The inline-six engines are a return to form for Mercedes as the automaker offered the engine layout in its vehicles until the late '90s. Dubbed M256, the 3.0-liter engine was built with the intention of electrification in mind and, therefore, comes with an Integrated Starter-Alternator (ISG), an electric auxiliary compressor, and intelligent turbocharging. These components allow the engine to make more power than the old V6 engine while also being more fuel-efficient. The M256 makes 408 horsepower and over 368 pound-feet of torque, while the older M276 V6 engine was good for 333 horsepower and 354 pound-feet of torque. A worthwhile improvement. 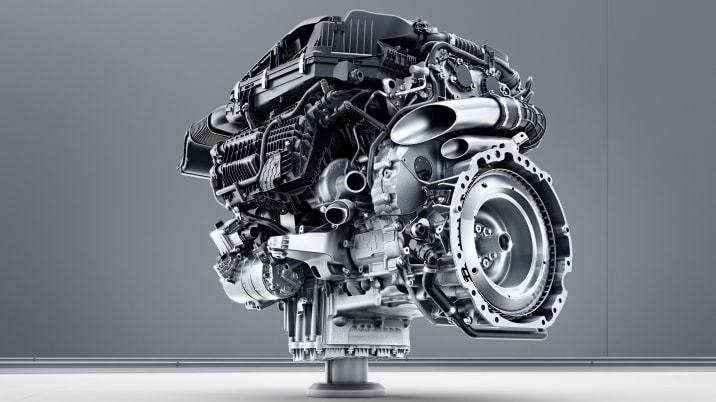 The turbocharger, ISG, and electric auxiliary compressor all work together to save fuel and reduce turbo lag. The ISG handles the majority of the work when the vehicle sets off, the electric auxiliary compressor fills in the gap until the larger turbo kicks in, and the new turbocharger spools up to ridiculous speeds – 70,000 rpm – within one third of a second. The ISG is part of a 48V electrical system that also handles the car's water pump and air-conditioning compressor, which makes drive belts irrelevant and reduces the overall length of the engine. 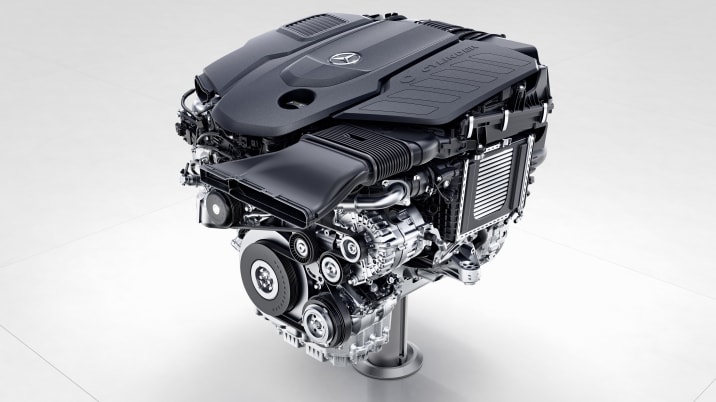 There's also an inline-six-cylinder diesel engine dubbed OM656 that features an aluminum block, steel pistons, Nanoslide coating on the cylinder walls, and the automaker's stepped-bowl combustion process. The diesel unit, which probably won't come to the US, is rated at 313 horsepower and over 479 pound-feet of torque. The engine represents an increase of 55 horsepower over the diesel-powered V6 engine. 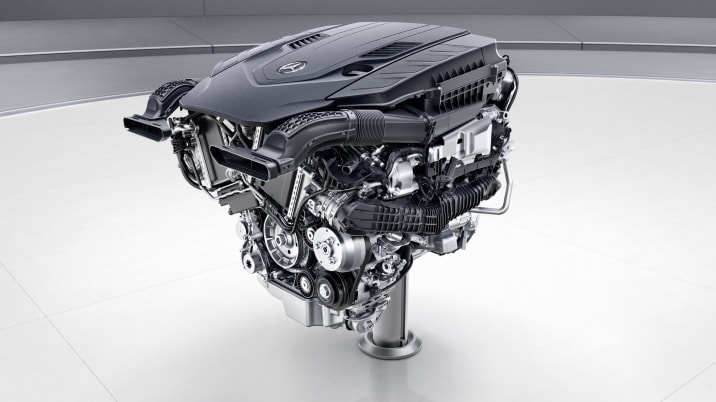 The twin-turbocharged V8 is codenamed M176, and Mercedes promises it will be one of the most fuel-efficient V8s on the market. The eight-cylinder engine utilizes Camtronic valve timing to shut off four cylinders for improved fuel efficiency. As with other modern MB V8 engines, the turbochargers are placed within the V and are heat-wrapped to protect other components in the engine. The V8 is rated at 476 horsepower and roughly 516 pound-feet of torque, which is 21 horsepower more than the M278 V8. 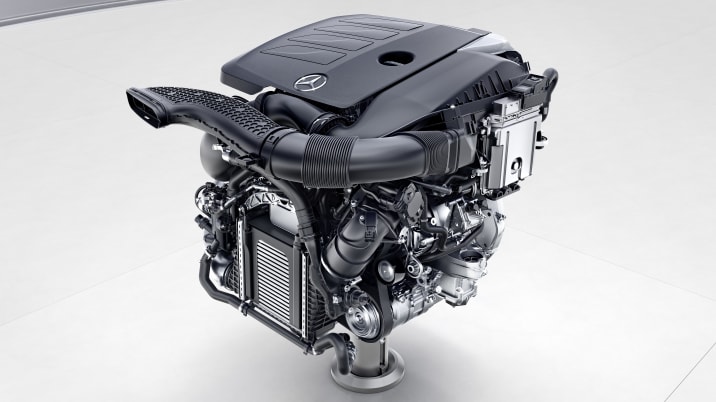 Lastly, there's a new twin-turbocharged two-liter four-cylinder engine in the stable. Named M264, the four-cylinder features twin-scroll turbochargers and a belt-driven 48V starter-alternator that is used to drive the electric water pump and the starter-alternator (BSA). The BSA helps the motor's fuel efficiency by recovering up to 12.5kW of power and filling in the turbochargers gaps below 2,500 rpm. Mercedes didn't release any specs on the engine, besides that it will make approximately 134-horsepower per liter.