Gregory Fagan
For people who make TV shows, business couldn't be better. A study published late in 2015 by the FX Network's research team tallied 409 scripted programs produced for the year, nearly twice the number produced just six years earlier. The two big takeaways from this for me as a viewer: 1. Even people who watch TV for a living can't possibly follow everything that's currently airing, and 2. For people acutely navigating this great-TV glut, a show needs a little something extra to make the appointment-viewing list.

For me, cool-car cameos help -- and Gotham rocks it.

Set in youthful Bruce Wayne's grey-washed "Gotham" before Batman's rise, the show's prop department uses a fleet 1980s Dodge Diplomat and Plymouth Grand Fury police cruisers to mildly discomfiting effect. To those of us accustomed to contemporary cops in brawny Ford Interceptors, Dodge Chargers, and SUVs, the sight of these boxy 80s fleet staples lamely meowing up the street just amplifies the futility of sending patrolmen to do a Batman's job. One could speculate that the producers chose this period at least partly to achieve this desired effect.

And, one might further argue, to better highlight the special-guest rides that pop up week to week, such as the 1970s vintage Volvo P1800 that graces the first few episodes of Season 3, currently airing Monday nights on Fox. The car belongs to reporter Valerie Vale (portrayed by Jamie Chung from Once Upon a Time), and its lustrous turquoise metallic curves pop delectably amid Gotham's squalor.

The vehicle of choice for Simon Templar – the playboy-thief-spy character Roger Moore played in the 1960s British TV series The Saint, previewing his urbane take on the James Bond role – Volvo's P1800 took a little over 9 seconds to hit 60 mph from a stop. 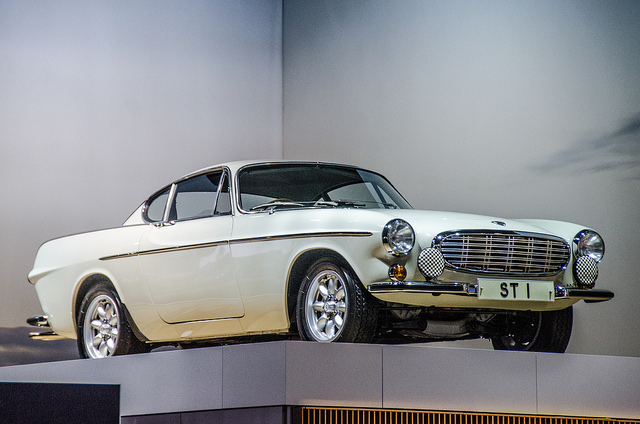 If less than a speedster, it ranks among its era's most gorgeous mainstream coupes, with a body drafted by Swedish yacht designer Pelle Petterson under the tutelage of the great Italian coachbuilder Pietro Frua. A P1800 even holds the endurance record for the most miles, 3 million-plus, ever run up by the original owner of a vehicle.

Whether or not Vale's way-too-nice-for-a-real-reporter car can survive Gotham's mean streets for even a season will be a matter for the show's producers to decide. Let's just hope that if this particular example of the Swedish automaker's glory years is to meet a fiery doom, that a suitable plywood double can be used.
X