BMW unveiled its Motorrad Vision Next 100 concept motorcycle today in Los Angeles, one of a series of concept vehicles from the various BMW Group brands that imagines what transportation will be like in about thirty years. The Vision Next 100 motorcycle is a radically different conception of the genre, more virtual reality than our rigidly traditional motorcycling present. It clearly looks like a motorcycle, and there are BMW-specific styling hallmarks thrown in for good measure. It's a zero-emission concept, of course, but there's still a lump where the engine would normally go. Instead of horizontally opposed pistons, there are shape-shifting ornaments that help block the wind.

The Vision Next 100 concepts from Mini, Rolls-Royce, and BMW have been as sci-fi as automotive futurism gets, with the Rolls being particularly radical from an aesthetic perspective. But the Motorrad concept is radical in terms of how it changes the fundamentals of motorcycling – from concerns about safety to the mechanics of the riding experience itself. Like the other Vision Next 100 concepts, don't assume that this is a serious proposal for a production-ready bike utilizing these systems, but rather a purely theoretical look at what might be.

There are two really interesting aspects that set this zero-emissions bike apart from other motorcycle concepts. One is the highly unusual frame, which warps to allow for steering. Turn the handlebars, and the entire frame changes shape. Flexibility is something that motorcycle designers usually try to avoid in frames, so it's a unconventional solution. The upshot is that there are no joints or bearings involved in steering, or in the suspension. You'll note there's no swingarm, or anything recognizable as a spring or damper. That's because the tires act as the bike's suspension. Combine this all with active self-balancing and a suite of active traction and stability aids, and BMW thinks that this future bike will never fall over. 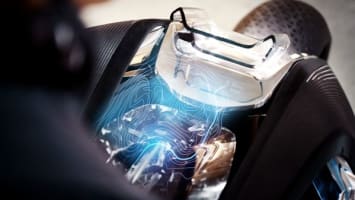 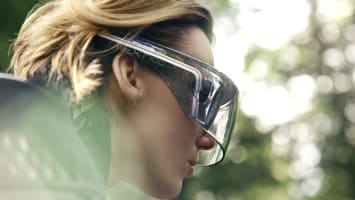 That improbable stability is why BMW also thinks the rider won't need a helmet or armor. Since it'll never crash, what's the point? This precludes any accidents unavoidable by the safety systems onboard, but sure, let's play along. The special suit and visor that the rider will wear are mainly there for information and comfort. The suit will heat and cool the rider as needed, but the trick stuff happens in the visor display. By tracking eye movements, it will provide information about the bike, the route, and more interactive driver aids as well.

If you've played driving games like Forza Motorsport, you know that some setting allow for the game to display the ideal line through the corner. The Vision Next 100 visor display would do the same thing, and at certain driver aid levels it would even intervene to steer the bike in the event the rider wouldn't get through the corner safely. BMW sees this as partly a training tool, partly a safety feature.

On the other hand, that sounds a lot like an autonomous motorcycle. Would that appeal to riders? Hard to say. For traditionalists, the good news is this is all fantasy for now. BMW may explore some of these technologies, but the point is to demonstrate a possible future, not a certain one. Any way you slice it, BMW's Vision Next 100 motorcycle concept is certainly different.