If you own a 2011 or 2012 model-year Nissan Versa, you may want to start shutting your doors more gently. The National Highway Traffic Safety Administration launched an investigation into airbags that could deploy when doors are closed.

The investigation began after NHTSA received early warning reporting data from Nissan and three complaints concerning the issue, which involves side curtain and seat-mounted side airbags. No deaths or injuries have been reported so far. If NHTSA deems a recall necessary, 155,000 cars could be affected.

The automaker gave us this statement about the issue: "Nissan is committed to the safety and security of our customers and their passengers. The company has received an inquiry from the National Highway Traffic Safety Administration (NHTSA) concerning the 2011-2012 Nissan Versa hatchback and the 2012 Versa sedan. Nissan is actively investigating this issue and, as always, working cooperatively with the regulators to answer their questions."

While this may seem like an odd recall, it's not the first time this has happened. Last year, FCA had to recall more than 300,000 Chargers and 650,000 Ram trucks for the same type of issue. Five minor injuries occurred between the recalls for each model. The issue was solved by recalibrating the side impact sensors or more carefully securing the wiring harness. 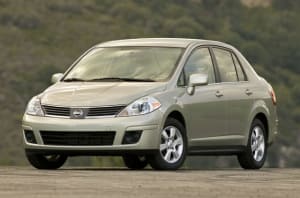