When it debuted last year, the sixth-generation Camaro brought with it some fairly sweeping changes. Chief among them was the transition from the fifth-gen car's Holden architecture to the Alpha platform that is shared with the Cadillac ATS and CTS. In terms of performance, this yielded improvements in nearly every measure, due in no small part to a weight reduction of several hundred pounds. But as good as the new Camaro SS is, there will always be an enthusiast contingent yearning for more. For those too impatient to wait for the ZL1, longtime GM performance tuner Callaway has heeded the call with this, the Callaway Camaro SC630.

As the name suggests, Callaway's performance treatment for the Camaro SS takes the 6.2-liter, direct-injected LT1 V8's output from 455 horsepower and 455 pound-feet of torque to a healthy 630 hp and 610 lb-ft by way of an Eaton supercharger, a cold-air intake, and custom software tuning. The Callaway package is available for any Camaro SS, regardless of whether power is sent to the rear wheels through a six-speed manual or an eight-speed automatic transmission, and both gearboxes remain mechanically unchanged from stock, as Callaway's engineers say there's enough headroom built into the stock hardware to handle this level of output.

Unlike with its fifth-generation Camaro SC572, Callaway has chosen to leave the chassis largely untouched here, and the aesthetic tweaks are decidedly subtle as well. That also stands in contrast to Chevrolet's own approach with the upcoming 650-hp Camaro ZL1, which is set to land in showrooms this winter and represents a full dynamic makeover for the car, not just added power. In addition, Callaway's supercharging strategy differs from GM's in a few crucial ways, making the SC630 package an interesting alternative to the LT4-powered ZL1. 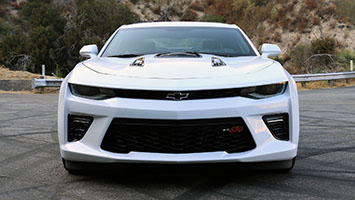 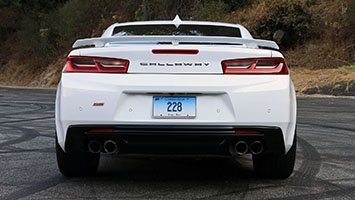 Aside from the top of the supercharger peeking out of the hood and a few badges, there isn't much to tip off interested parties to the SC630's true capability. Although the volume from the quad-tipped exhaust is cranked up a bit versus a stock SS system, the SC630 keeps a fairly low profile from an auditory standpoint as well and retains the factory dual-mode setup. Blower whine is virtually non-existent both at idle and when pulling through the rev range.

But from behind the wheel, it only takes one dip into the throttle to detect Callaway's handiwork. Originally developed for the Callaway Corvette SC757, the GenThree supercharger system at the heart of the SC630 uses a TVS2300 Roots-style blower. It's a 2.3-liter unit rather than the 1.7-liter one that GM uses with the LT4, which means that Callaway's blower doesn't need to spin nearly as fast to generate similar levels of boost, and in turn it generates less heat doing so. GM actually used a 2.3-liter supercharger on the C6 ZR1, and the word within engineering circles is that the LT4 changed to a smaller blower to comply with new crash safety regulations rather than for any performance reason.

Heat is a primary concern when supercharging, as excessive temperatures can result in a steep drop off of power due to supercharger heat soak or electronic fail-safes designed for self-preservation when internal temperatures hit critical levels. Along with choosing the larger blower versus the LT4, Callaway sought to address these issues with a unique triple-element intercooler system that consists of a primary intercooler at the top of the supercharger and a pair of secondary intercoolers on either side of the rotor packs. And the supercharger sticking out of the hood? It isn't just there to look neat – the cutout serves as a heat extractor. 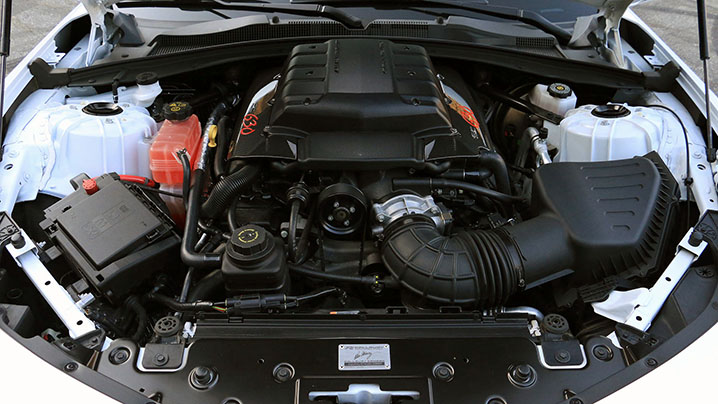 These efforts seem to have paid off, as power remained consistent and engine temperature stable throughout several extended runs along the fast, twisting tarmac of the Angeles Forest northeast of Los Angeles. But without any changes to the suspension, brakes, or contact patch, one could rightfully expect the SC630 to be a handful when driven hard, particularly in anything other than a straight-line sprint.

Fortunately the new Camaro chassis is such a solid foundation that the SC630 puts the power down with no issues, and the newfound grunt doesn't simply equate to incinerated tires. Traction control will step in when wide-open throttle is requested at speeds below about 60 mph, but any interventions it made when launching this automatic-equipped test car felt relatively seamless. Of course, like anything with output in this league, careful throttle inputs are required if you'd prefer to not end up in a ditch.

Still, when the roads get demanding the stock chassis components start to show their limitations. It's much easier to get this SS up to a felonious pace, but once you're there the suspension seems a step or two behind the powertrain, even with the Camaro SS's adjustable dampers dialed to their sportiest settings. The same goes for the brakes and tires; although the factory-optional six-piston Brembo brakes and Michelin Pilot Super Sport tires are undoubtedly capable components on a stock Camaro SS, they're less at home handling the rates of speed that the additional 175 horsepower can generate. 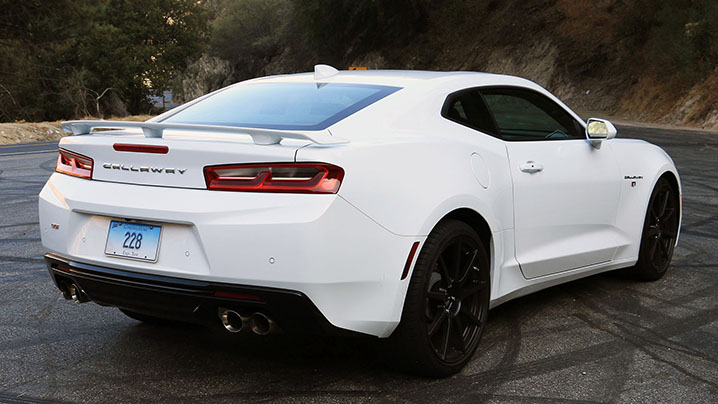 Despite the fact that setting lap records isn't the Callaway Camaro SC630's primary focus, it's still a riot to drive this thing fast. Without any significant mechanical changes outside of engine output, this package will likely appeal to those looking to bolster their Camaro's drag racing chops rather than overall dynamics, though it's worth noting that the stock SS isn't really a slouch in that regard to begin with, and the SC630 hardware only adds about 80 pounds of heft to the front of the car.

Callaway's decades of performance tuning experience were also evident from the lack of even a hiccup from the SC630 throughout our time with it, both when driven hard and when faced with long bouts on crowded freeways. That probably explains why Callaway includes a three-year, 36,000-mile warranty with each Camaro it sells (a five-year, 60,000-mile extended powertrain warranty is also available), and Callaway's modifications do not nullify GM's own warranty on the car.

The SC630 treatment costs $16,995 on top of the price of the Camaro SS donor car; it can be optioned onto new vehicle purchases through Callaway's network of participating Chevrolet dealerships or installed on customer cars at the company's facilities in California and Connecticut. That may seem like a big ask for what boils down to a supercharger kit and some badging before the addition of any optional extras like Callaway's unique nine-spoke forged wheels, but there's something to be said for peace of mind when it comes to major engine surgery. Callaway's assurance that customers will be covered in case something goes awry brings its own inherent value to the table, and the SC630 package's effect on straight-line performance is inarguable.

Callaway expects to build about 350 of these cars per year, and for some, exclusivity goes a long way. Well, that and 630 horsepower.