The goal was to quickly survey the supremely wonderful oddness of the French domestic car universe. We found so much at our first stop that we never made it off the Citroën stand, actually. What follows is a look at a few of the strangest features, all unusual but also eminently practical, in the grand Gallic tradition – a fun, geeky highlight of one of the best stops on the auto show circuit.

This mini-MPV is part of a uniquely European take on the tiny people-mover, a genre of vehicle only a few automakers have rolled the dice on for Americans. (Remember the comically mis-proportioned Nissan Stanza Wagon?) The new C4 Picasso's most distinguishing characteristic is the fantastic greenhouse, with incredible sightlines and a huge windshield. The effect of a bright sunny day on this cabin must be frightening, we thought as we sat inside at the Citroën stand. The solution is the most interesting sunshade we've ever seen.

Considering the spiritual connection to the original Citroën DS, with its hideously complex (but fantastically plush) hydropneumatic suspension system and 1950s spaceship-like interior, you'd think the modern DS line would be a little more esoteric. Sadly, they're pretty conventional small hatchbacks, but at least the DS3 cabrio has a party trick. If having to raise the top partly to put groceries in the back counts as a party trick, that is.

While other cars, like the Fiat 500 Cabrio, raise the roof partially on a touch of the trunk release button, it's the complex hinging that brings the trunklid up vertically behind the back window that really drew us in. Because it's a French mechanism, however, it took some fussing with pressing the trunklid firmly against the sensor before the roof would move out of the way ... and this was a brand-new DS3 Cabrio on the show floor stand!

Off kilter: the fixed-hub steering wheel of the Citroën C5

Fixed-hub steering wheels have been shorthand for wildly optimistic futurism in show cars for ages, but a production car with one? Leave it to the French. The first-generation C4 had a wheel like this, and so does this contemporary C5. It's a simple idea with a rather profound effect sitting inside. 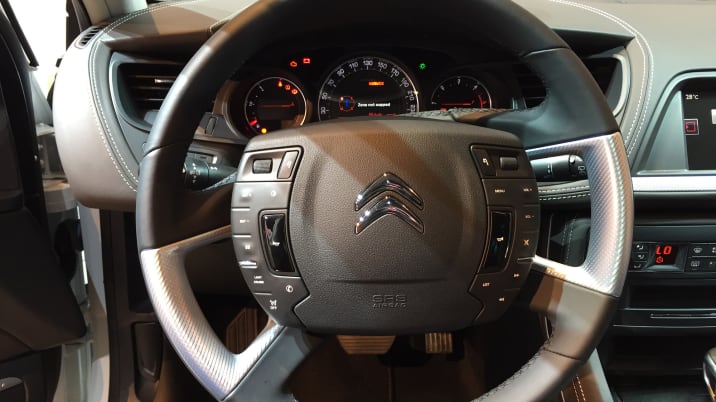 They wouldn't let us start up the car in order to put the wheel through its paces, but you can see how it works in the video below.

Surely some of you will find this one particularly counterintuitive, or inconvenient, but I think it's a clever idea. It also keeps the airbag oriented in the proper way. More importantly, it is so deliciously different that we couldn't help but show it off to you.

There was way more to see at the show – too much Frenchness to adequately convey in the space allotted – but we hope you've enjoyed the brief look at the oddness contained in just one display stand at the 2016 Paris Motor Show.