It's sort of like a magic trick. Now you see it, now you don't. Up until now everything Nikola Motor Company, the company that essentially came out of thin air with the goal of making a zero emission-semi truck, claimed seemed somewhat plausible. While its outrageous specs and claims for the Nikola One raised some concerns, nothing was a red flag, until now. The two-year old company recently claimed that it would completely drop its plans for a battery-powered semi truck in favor of one that utilizes hydrogen.

Instead of using a 320-kWh battery pack and a fuel-agnostic turbine, the company is looking towards a custom-built hydrogen-electric 800V fuel cell. Nikola Motors also claims that its Nikola One will have a range of more than 1,200 miles between fill-ups and can get nearly 20 mpg, all while emitting zero emissions. The idea to go from a battery-powered truck to a hydrogen-powered one is confusing for a few reasons.

For one, as Electrek points out, battery-powered cars are roughly three-times more efficient than ones that use hydrogen. There's also a lack of infrastructure to support hydrogen vehicles, which would make refueling nearly impossible. Well, Nikola Motor CEO Treveor Milton addressed the zero-emissions issue, as well as the fueling dilemma in the same press release. Milton claims the company will build zero-emissions solar farms that will produce more than 100 megawatts and will utilize electrolysis to create hydrogen from water.

Despite planning to make its own hydrogen, Nikola Motors will offer the natural gas variant of its semi truck for countries where hydrogen isn't readily available. The company aims to have 50 "hydrogen stations" by 2020 for customers to refuel its vehicles.

Previous Tweets display the Nikola One with six electric motors and a total of 2,000 horsepower and 3,700 pound-feet of torque. The current Nikola One on the website now says the truck will make 1,000 horsepower and 2,000 pound-feet of torque, while being powered by hydrogen, having a 320-kWh battery, and "100% Electric Drive." Instead of offering one million free miles of fuel, the Nikola One will come with one million miles of free hydrogen. The move to ditch batteries is also puzzling as the company claimed to have roughly $10.5 million from 7,000 pre-orders.

Nikola Motors still plans to unveil the hydrogen-powered Nikola One in December, but its claims have gone from sounding somewhat plausible to outrageous. 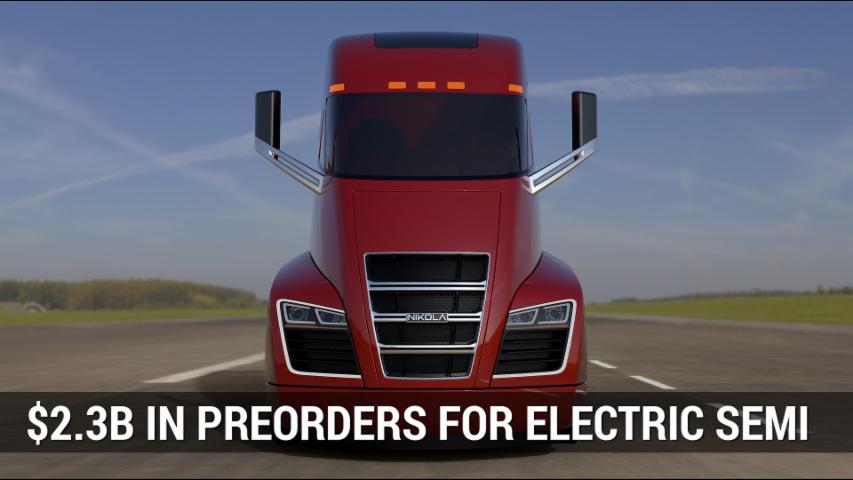