Jonathon Ramsey
Three bursts of chaos decided the course of the British Grand Prix. The first was a literal cloudburst a dozen minutes before the race, which poured water on the Silverstone Circuit while drivers sat on the grid. Six minutes before the lights-out, the race director decided to start the race behind the Safety Car.

The field loped around the wet track for five laps. When the Safety Car pulled off, the three leaders – Mercedes-AMG Petronas' Lewis Hamilton, followed by teammate Nico Rosberg and Red Bull's Max Verstappen – stayed out. Behind them, the second chaotic moment occurred: a big group of drivers made pit stops for intermediate tires. 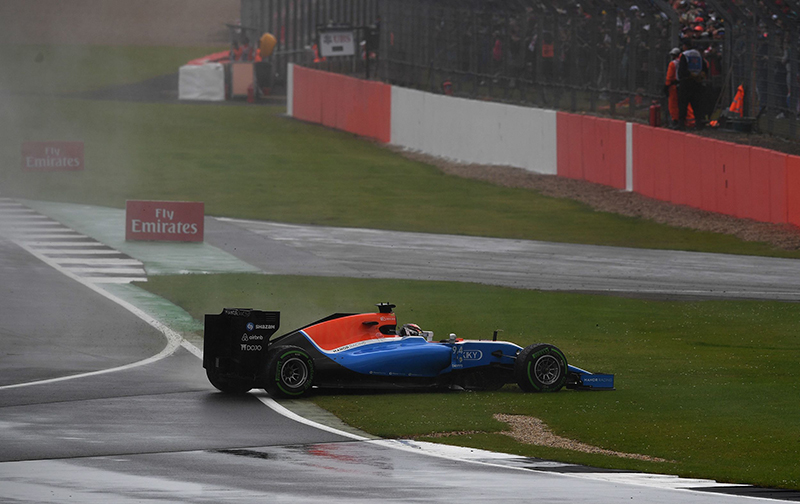 When Manor's Pascal Wehrlein spun at Turn 1 on Lap 7, officials issued a Virtual Safety Car. With the rest of the field slowed down, the three leaders ducked into the pits on Lap 8 for intermediates. The fortuitous timing meant all three drivers rejoined the track in their original positions. By Lap 9, with racing resumed, Hamilton had a 4.9-second lead on Rosberg.

From that point, even as the track dried, no one bothered Hamilton during what one commentator called "a measured drive." The Brit won his home grand prix, taking the checkered flag seven seconds ahead of Rosberg. 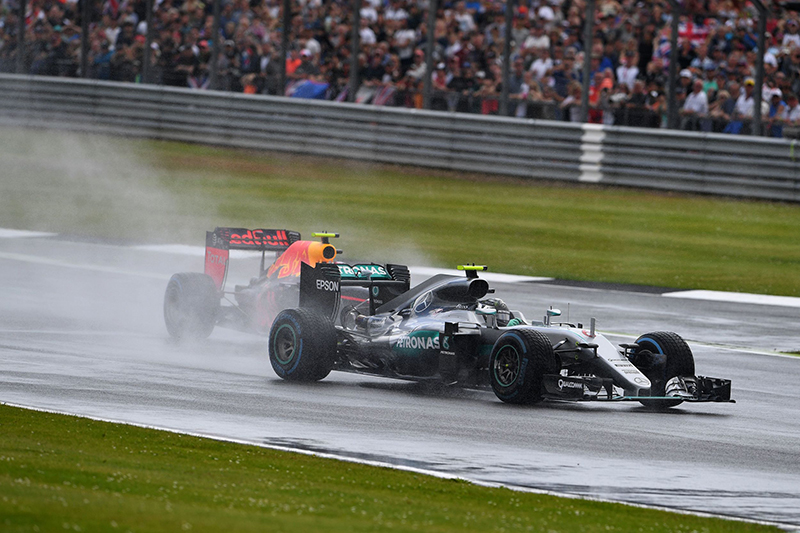 Rosberg had to earn second place on track. The German's car didn't respond well to the intermediate tires, so Verstappen excecuted an outstanding pass on Rosberg on the outside through Chapel on Lap 16. After everyone switched to slicks, Rosberg's Mercedes reclaimed its mojo and the German hunted Verstappen down, passing the Dutchman on Lap 38.

The final touch of chaos happened when Rosberg's gearbox threw a tantrum on Lap 47 of the 52-lap race. Rosberg radioed his engineer, "Gearbox problem!" His engineer replied, "Affirm. Chassis default zero one. Avoid seventh gear, Nico." The race stewards allowed the engineer's first two statements, but stewards said the instruction about seventh gear contravened the rule that "the driver must drive the car alone and unaided." After the race, officials added ten seconds to Rosberg's time, demoting him to third behind Verstappen.

Rosberg's is the first penalty arising from radio communication restrictions. Unsurprisingly, Mercedes will appeal. At this year's Baku race the radio controversy stemmed from engineers refusing to tell drivers what to do. Now we know what happens when the pit wall gets loose lips. 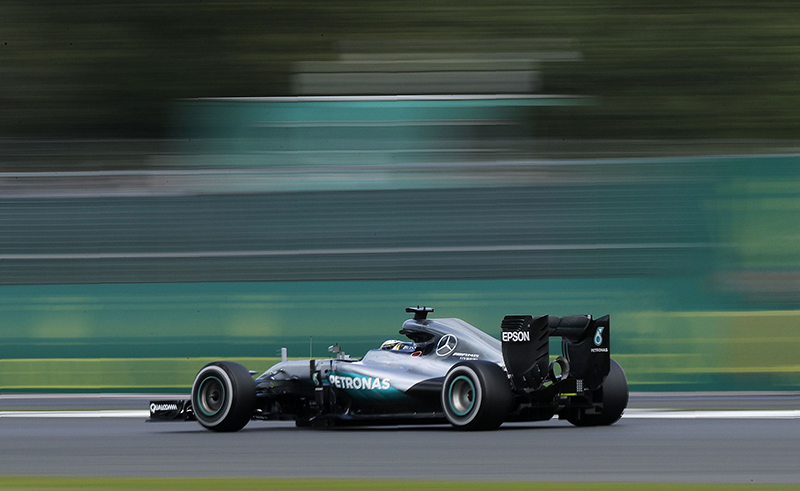 The few order changes behind the lead trio came primarily from Sergio Perez losing a couple of places and a slew of drivers flubbing Turn 1. The first corner didn't dry like the rest of the track, so deviations from the dry line often forced drivers into the runoff area or threw them into a spin.

Daniel Ricciardo finished a lonely fourth for Red Bull after another race with poor pit stop timing. The normally beaming Aussie said before the race Red Bull "has been a bit different" since Max arrived. That might be a throwaway line, or a sign of deeper discontent. Kimi Räikkönen grabbed scraps for Ferrari in fifth, Sebastian Vettel couldn't do better than ninth for the scuderia. Force India finally made the most of an entire weekend, Perez finishing sixth ahead of teammate Nico Hülkenberg. Carlos Sainz, Jr. locked up eighth, Toro Rosso teammate Daniil Kvyat finished tenth. 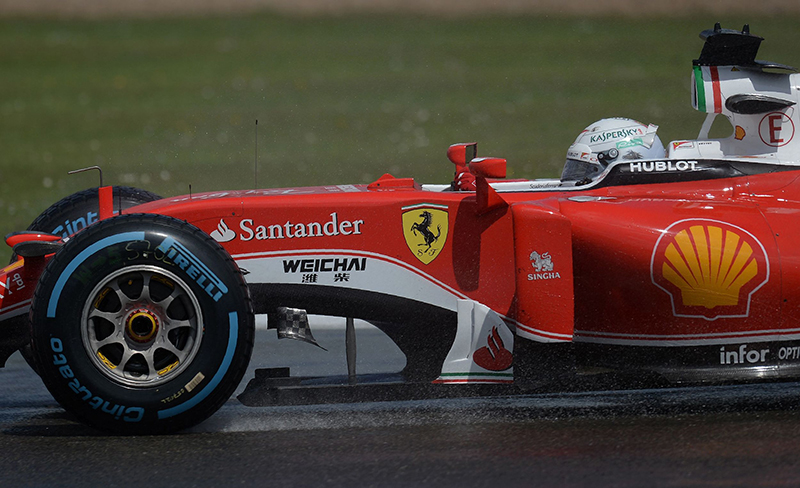 So what's happening at Ferrari? Is it too early to suggest hints of the Stefano Domenicali era, when every year promised a resurgence but every year came undone because of details? It is probably too early for that, but the signs aren't good. Vettel's gearbox again broke before the race. The team re-signed Räikkönen, with some implying Ferrari wants driver continuity while the team addresses the car issues. The Ferraris couldn't touch the Renault-powered Red Bulls at Silverstone, a power track, and they had a hard time with Red Bull in Austria, another power circuit. 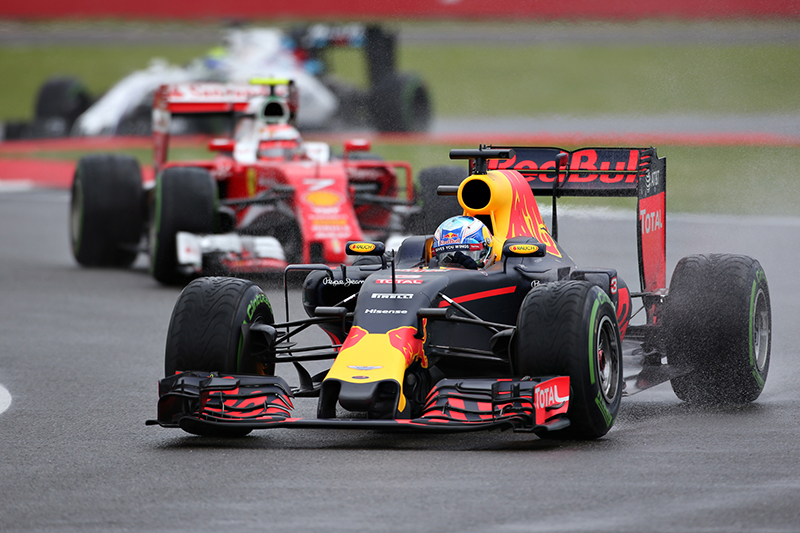 In the first five races this year Ferrari scored 109 points, Red Bull scored 94. In the second five, Ferrari scored 95 points to Red Bull's 101. The Italian team holds a nine-point lead on Red Bull in the Constructor's Championship. Bernie Ecclestone said, "Ferrari has become very Italian again," interpreted as a reference to tumultuous yesteryears when the Italian team couldn't get it together.

Speaking of team swoons, Williams' seasonal dip continues. The Woking outfit scored 65 points in the first five races, only 27 in the following five. Force India, just behind Williams, closed the gap to 19 points at Silverstone. 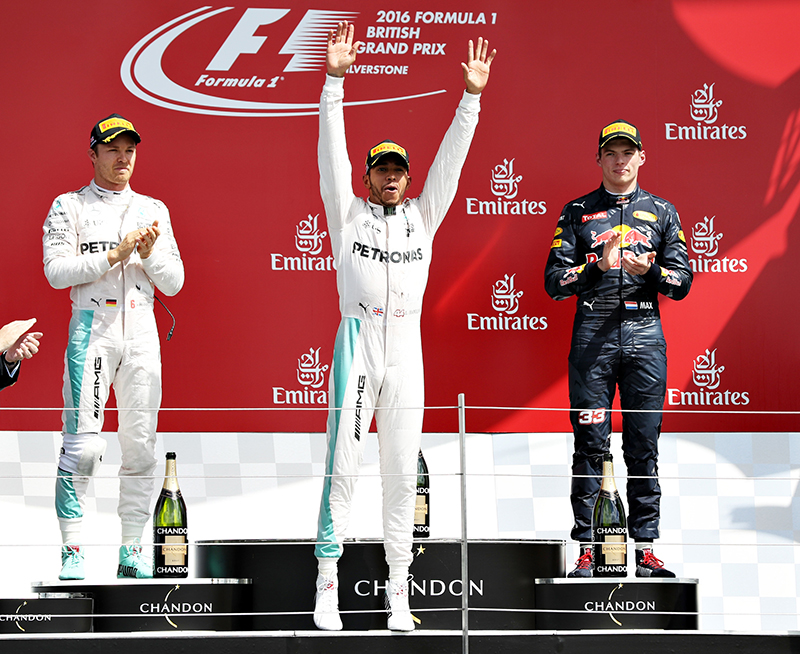 Hamilton's win and Rosberg's demotion narrows the Driver's Championship standings to one point: Rosberg with 168, Hamilton with 167. Räikkönen takes over third place with 106 points, Ricciardo slides up to fourth with 100, Vettel drops from third last week to fifth this week with 98. Verstappen occupies sixth place with 90 points. Only Hamilton has scored more points than Verstappen since the Dutchman's win in Spain.

Now the teams enjoy a two-week break before the slow-speed Hungaroring gets a chance to upend the standings. We'll see you then.
X