You can hear it loud and clear – that is, the sound of nearly nothing at all – when hurtling along at 160 mph. The quiet part isn't surprising; after all, this is a $300,000 übersedan. But the speed? The sensation is disarming and utterly intriguing. It's safe to say that three tons of mass have no right to move through space so effortlessly. Welcome to the latest ultraluxe, four-wheeled hyperloop from Bentley.

In case you missed the engraved announcement, the Mulsanne is the higher-priced, handcrafted flagship that plays big brother to the Flying Spur, the (relatively) more ubiquitous sedan that shares a good amount of parts with the Continental GT. Imagine the snooty older sibling that studied at Wharton, wears tailored suits to breakfast and an ascot to supper, and dangles a pipe from the corner of his mouth, and you've got a good idea of what distinguishes the more finely finished Mulsanne from its stablemate. Not only does a base Mulsanne command a $100,000 premium over the Spur, it's a more laboriously assembled specimen that takes a staggering 400 man-hours to build. Unlike the Spur, whose top model boasts a W12, the Mulsanne is powered by a 6.75-liter pushrod (!) V8. Less is usually less in this stratospheric segment, but this humungous eight-cylinder has a history stretching back six decades – precisely the sort of tweedy legacy stuff that appeals to old money. This is the last Bentley to use this engine, and it will be replaced by a new twelve-cylinder. 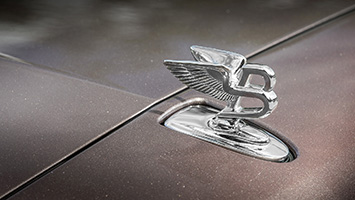 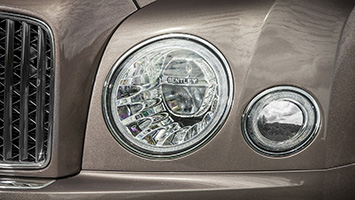 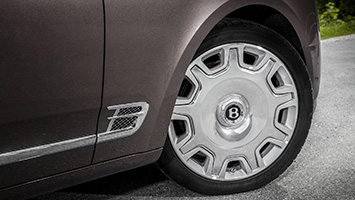 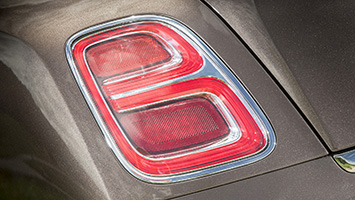 For 2017, the big, bad platform reaps its first significant series of updates since its 2009 debut (the Speed variant was introduced 18 months ago). Upgrades to the Mulsanne were focused on refinement, among them a smoother ride, revised styling, an updated interior, and yes, a quieter cabin. Despite its undercurrents of old-world opulence, the Mulsanne's face has been modernized with flusher features, LED headlamps, and a wider grille. Though it retains the delightfully anachronistic Flying B hood ornament, the winged capital letter can now be ordered in a refreshingly modern smoked black hue. Mean. Revisions at the rear include a redesigned bumper and subtle Bs incorporated into the tail lamps.

Inside, new seats with revised foam offer greater comfiness. Perhaps more notably, the infotainment system gains a much-needed upgrade with an 8-inch touchscreen, a 4G LTE WiFi hotspot, and Apple Carplay functionality (for front passengers). Optional 10.4-inch tablet screens at the rear offer a trick bit of engineering, rising out of the front seats at the push of a button. The removable, Android-operated touchscreens have a slick feel, an intuitive interface, and Google Maps integration; bundled with veneer picnic tables and a Naim premium audio system (20 speakers, 20 channels, and a 2,200-watt amplifier), the Entertainment Specification package adds a cool $19,855 to the grand total – a nicely optioned Honda Civic's worth of loot. 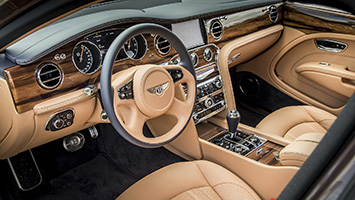 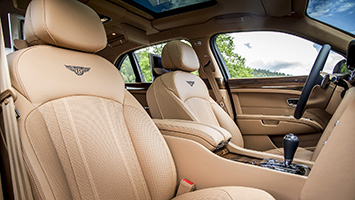 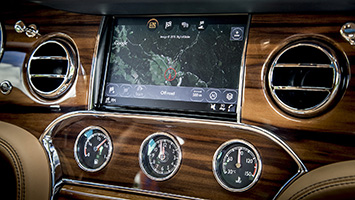 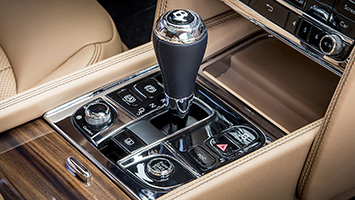 The standard Signature model pushes 505 hp and 752 lb-ft (good for a 0-to-60-mph run in 5.1 seconds); the Speed gets 530 hp and 811 lb-ft (nope, that Biblical torque figure isn't a typo), doing the deed in 4.8 seconds. New active engine mounts smooth out the powerplant's personality, while ride quality and body control have been enhanced with hydraulic suspension bushings, a reinforced rear subframe, and an enhanced air suspension system. Other electronic additions include blind-spot monitoring, high-beam assist, and collision mitigation.

With its big-eyed mug and hulking stance, the 2017 Bentley Mulsanne Speed seems like an unlikely candidate for a high-speed run. But the Bavarian countryside's natural grandeur and unrestricted stretches of autobahn make it an appropriately epic place to drive the latest iteration of this plus-sized sedan. 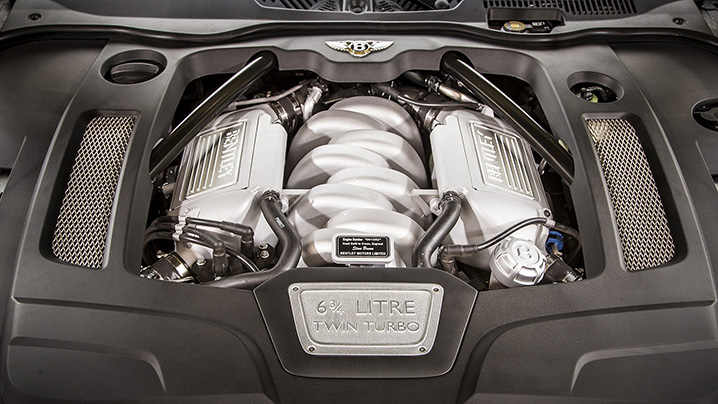 Climb inside a Mulsanne, and you're met with a herd of hides. From A-pillar to dashboard to transmission tunnel to headliner, there's an abundance of leather material. It takes 150 hours to stitch all those cowhides together, a testament to the amount of over-the-top attention to detail this flagship flaunts. Though Bentleys are conventionally considered drivers' cars (versus more backseat-focused Rolls-Royces), the rear perch is an inviting place to pile on the miles. Sure, the seats are cushy, but there's also no shortage of creature comforts for the rear passengers, from the aforementioned tablets and tray tables to the refrigerated bottle cooler which, for an extra $10,970, includes an electrically actuated sliding frosted glass door and a set of crystal tumblers or champagne flutes, depending on your beverage of choice. If you're lucky (i.e. wealthy) enough to score one of the 25 new-for-2017 Extended Wheelbase Mulsannes destined for the US, you'll get nearly 10 more inches of legroom, reclining seats that claim the longest extension in the business, and niceties like wireless trackpads to operate those now-out-of-reach tablets.

Back in the driver's seat, the view over the massive bonnet is commanding, led by big analog gauges and a tachometer that runs counterclockwise. The tach doesn't spin much, though – after all, the expansive torque plateau starts at only 1,750 rpm, and the engine redlines at a mere 4,500. But there's never a lack of propulsive power. Just mash the right pedal and boom: Regardless of which of the ZF transmission's eight speeds are selected, the Mulsanne's forward path is immediate, transferring oceans of torque to the rear wheels and propelling the car forward effortlessly. It's easy to ignore the knurled and chromed stainless-steel paddle shifters because, between the low-revving eight-cylinder and the choice of gears, downshifts are usually redundant. The luxury of such a large-displacement engine coupled with the eight-speed is its ridiculous passing power; several times on the autobahn at triple-digit speeds we approached rapidly moving left-lane traffic, flashed them, and sped past like they were standing still, an unlikely visual for such a stately tourer. 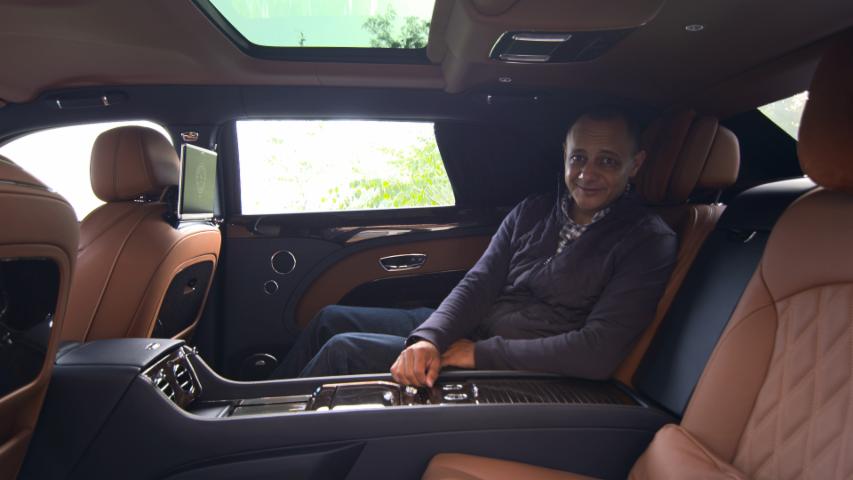 The Mulsanne feels big-boned when the road gets twisty, though the Speed's tighter suspension takes the edge off the feeling of bulkiness. Hydraulic steering enables easy, precise direction changes when piloted briskly. But push it even faster and brake harder, and steering requires a bit more attention. This is, after all, a massive sedan that's been tuned for Teflon-smooth refinement, not sports-car-like performance.

And then there's the silence, which has been noticeably improved for 2017. Bentley says that low-frequency rumbles were reduced by the suspension tweaks, and that up to 15 dB of engine noise were cut thanks to the new hydraulic mounts. The resulting reduction in road and drivetrain noise during development made the tires sound perceptibly louder, which led to Dunlop cutting 4 dB of tire noise by introducing a foam architecture to the rubber. The most extreme example of the silence/performance disparity is the Speed: With 811 lb-ft on tap and that eerily low noise level, the Mulsanne Speed easily overcomes its elephantine tonnage. Coupled with the insulated cabin, the sensation of speed feels akin to riding in the eerily well-insulated nose section of a Boeing 747 while wearing noise-cancelling headphones.

The Bentley Mulsanne has never pretended to be on the cutting edge of technology, though the newfound multimedia system and driver aids push it incrementally towards the 21st century. But the flying B's flagship doesn't need bells and whistles to maintain ultraluxury relevance; with its delightfully old-world interior and improved ride and sound insulation, the Mulsanne becomes more of what it was conceived to be: an imposing, seemingly unstoppable, but strangely discreet locomotive of a passenger car. There may be nimbler big sedans that can be had for a fraction of the cost (see top dogs from Audi, BMW, Cadillac, and Mercedes), but the Mulsanne sets itself apart for the sheer audacity of its vision, from the exquisiteness of its interior to its insistent thrust. Most will never see, smell, or touch this leather- and wood-lined interior (after all, only 200 or so Mulsannes make it to the US every year), but that also offers a sense of validation for Bentley's top-of-the-line sedan. In this case, rarity is a treat, one that inspires more attainable cars to become quicker, quieter, and ultimately more special. 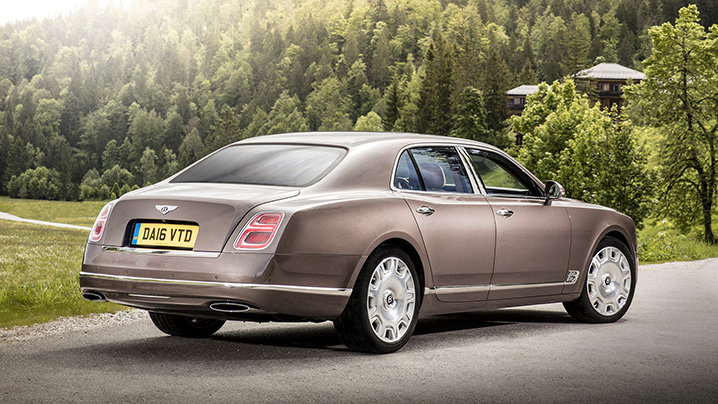