Clueless surfer continues to struggle with the realities of endurance racing

Rory Parker
We tasked surfing journalist Rory Parker to watch this year's live stream of the 2016 24 Hours of Le Mans . What follows is an experiment to experience the world's greatest endurance race from the perspective of a motorsports novice. Parker lives in Hawaii and can hold his breath longer than he can go without swearing. For Part One, click here. Or you can skip ahead to Part Three here.

I write about surfing for a living. If you can call it a living. Basically means I spend my days fucking around and my wife pays for everything. Because she's got a real job that pays well. Brings home the bacon. Very progressive arrangement. Super twenty first century.

I run a surf website, beachgrit.com, with two other guys. It's a strange gig. More or less uncensored. Kind of popular. Very good at alienating advertisers. My behavior has cost us a few bucks. I'm terrible at self-censorship. Know there's a line out there, no idea where it lies.

I still don't understand any of the technical side. Might as well be astrophysics or something.

For contests I do long rambling write ups. They rarely make much sense. Mainly just talk about my life, whatever random thoughts pop into my head.

"Can you do something similar for Le Mans?"

"Sure, but I know absolutely fuck-all about racing."

"Will do. But you're gonna need to edit my stuff. Probably censor it heavily."

So here I am. I spent the last week trying to learn all I can about the sport of endurance racing. But there's only so much you can jam in your head. And I still don't understand any of the technical side. Might as well be astrophysics or something.

While I rambled things were happening. Tracy Krohn spun into the gravel on the Forza chicane. #89 is out of the race after an accident I missed. Pegasus racing hit the wall on the Porsche curves. Bashed up front end, in the garage getting fixed.

Toyota and Porsche are swapping back and forth in the front three. Ford back in the lead in GTE Pro. #91 Porsche took a stone through the radiator, down two laps. Not good. 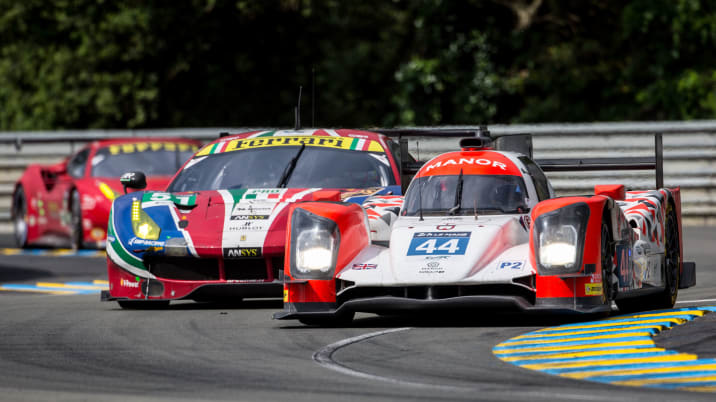 The wife and I are one of those weird childless couples that spend way too much time caring for the needs of their pet. French bulldog, Mr Eugene Victor Debs. Great little guy. Spent the last four years training him to be obedient and friendly.

Nice thing about dogs, when you're sick of dealing with them you can just lock 'em in another room for a few hours. You don't need to worry about paying for college. They'll never hit puberty and say, "Fuck you, Dad!" You can chop their balls off and keep them docile.

But we like to travel and finding someone willing to dog sit can be a pain in the ass. We've made an arrangement to trade off with a friend. Kenneling isn't really an option because the only places on island are super overpriced, and are just some dirtbag who lets the dogs run wild in his muddy backyard.

I love dogs, but this thing fucking sucks. Tiny little garbage mutt. Scared of everything. Favorite move is to yip and bark until you look at him, then flop on his back and spray piss in the air. Totally untrained. Gotta lock him up in dog jail if you're not paying close attention. Which entails chasing him around the house as he pees and yelps.

Webber with the fastest lap time of the race so far. 3:21.816. Moves into first, then into the pit. Toyota uses the opportunity to take the lead.

I drive like an old lady. I'm that guy you all hate. Always doing the speed limit. In no hurry at all.

Ford moves into the first three spots in GTE Pro. My father-in-law owns a bunch of Ford dealerships, this is probably good for him. GTE cars are, ostensibly, production cars, right? Wonder if I could get my hands on one. Not to own, that'd be stupid. Only one stretch of road on Kauai with a speed limit over 45mph. And I drive like an old lady. I'm that guy you all hate. Always doing the speed limit. In no hurry at all.

Mainly because I don't have a real job, got nowhere to be. Also because Hawaii time is a real thing. Fifteen minutes late is the same as being early. Anyway, maybe I could beg one off him and flip it to some rich dude. Of course I'd probably want to take it for a spin first. End up wrapping it around a telephone pole.

Corvette #57 driven by Patterson spins into the gravel. Kobayashi sets the new fastest lap of the day. 3:21.445.

Does endurance racing sell hair care products? Eurotrash overlap? "I like to watch racing, and I want to look good while I do."

My wife asked, "Are you planning on just writing about yourself?"

"Yeah. That's what I usually do. I think I'm fascinating."

"I guess. People seem to like it. But for me 'fascinating' just means emotionally unstable with periodic bouts of rage."

Ford was definitely sand bagging, right? Last minute BoP to slowed 'em down, still been running in front of GTE Pro all day.

Guys do similar things in surfing, occasionally. Throw a heat during non-elimination in order to get an easier draw in the next round. Against the rules, grounds for fines. Hard to prove though. Rule's never been enforced.

It's only cheating if you get caught. Pull it off and it's called winning. Speaking of getting caught, #26 just got handed a drive through penalty for refueling with the engine on. Naughty boy.

I'm using the internet as an assist to understand exactly what's going on. Someone on reddit just pointed out that Mark Webber has driven 745 miles so far today. That's mind boggling. Over the course of twenty four hours these cars will drive further than the distance from Kauai to Los Angeles. Really puts things in perspective.

I'm typically a pretty unrepentant pirate. So easy to find illegal streams of pretty much anything. But I shelled out the eleven bucks or so for the official deal this time. Mainly because I didn't want to deal with shit failing all the time. Money well spent. Good commentary, quality transmission. No commercials! Surprising. I'd assume they'd try and suck out every penny they could.

Audi blew a turbocharger and got it fixed in twenty minutes? I'm gonna remember that the next time my mechanic says it'll take a week.

Audi blew a turbocharger and got it fixed in twenty minutes? I'm gonna remember that the next time my mechanic says it'll take a week to fix my shit.

Inès Taittinger puts it straight into the barrier at Mulsanne. Stream is telling me Arnage but I think that's incorrect. Second nose destroyed for Pegasus. Women drivers, man...

Some confusion over whether Tattinger has left her car. I guess you've gotta stay within 5 meters or leave the race? Looks like Taittinger stayed in. Pegasus is still in the race. Albeit bringing in the rear.

Ford's one and two, there's a Corvette in the gravel just past the Porsche curves.

Driving a car that fast has to beat the shit out of your body. But the mental side has gotta be worse. Spending an entire day worrying about, literally, every second. Has to wear on you. Tough on the crew as well as the driver. Every motion needs to be perfect.

Aston Martin #99 ends up there too. Spins as it comes out of the curve. Garbage dog is barking at a wall. I hate it so much. Corvette #64 spins out or something. Not really sure.

Franchitti runs Ford #67 into the tires at Arnage. Sounds so cool, calm, collected about it. 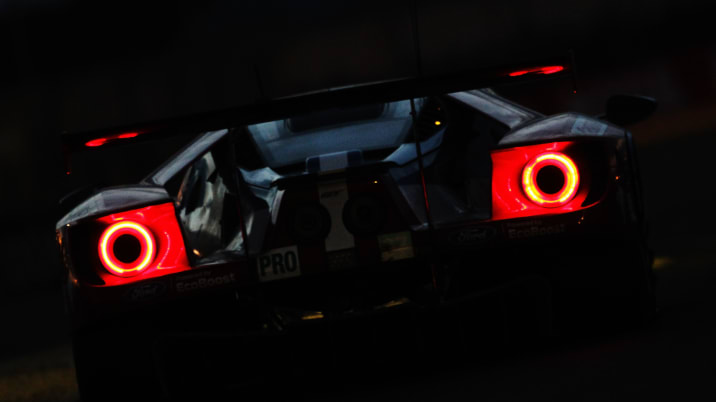 Seven hours done. This is gonna be harder than I thought. Need to go take a shower or something. Wake my ass up. Put two pots of coffee in my belly but it's only making me nauseous.

Starting to suspect endurance racing is like competitive surfing. Great if you're super into it, best taken in a distilled form by everyone else.

KCMG #47 is stopped on the side of the track.

Strange seeing the sun set in France live from the other side of the world. Keep expecting to see darkness outside my house. Since we don't have daylight savings in Hawaii, and because we're close to the equator, our day length doesn't really change. Sun sets between 6 and 7, generally.

Throws me off when I go other places. Spent some time in Bariloche, Argentina. Wouldn't be full dark until midnight. Always confused me when the sun would rise 4 hours later.

Ben Keating loses control of the #48 Murphy at the Dunlop bridge. Fabien Barthez gets a drive through penalty for speeding in the slow zone. KCMG #47 is retired.

Audi's dealing with mechanical problems in both cars. I don't know what. Probably wouldn't understand if I did.

One third of the way through the race and it's Toyota and Porsche in the front four of LMP1. Ford's got three of the top four in GT, the #82 Ferrari in second.

#23 gets another penalty for speeding in a slow zone, this time with Chatin behind the wheel.. Two minute stop and go penalty. Which I'm assuming is a pretty big deal in a sport where seconds matter.

Commentators were making it seem like installing Sausset was this gnarly undertaking, worked pretty much how you'd imagine. The ejector seat is interesting. Fire him out of the car using compressed air. Just eat shits onto the ground after, I guess.

Safety cars are on the track, good news for the folks in the garage. Repaired some rail, cleared gravel off the track. Green flag with slightly more than fifteen hours left. Porsche moves into the lead with Toyota following in the next two slots.

Midnight in Le Mans. Good little boys and girls are sound asleep. Group of madmen are going balls to the wall in the dark of night. 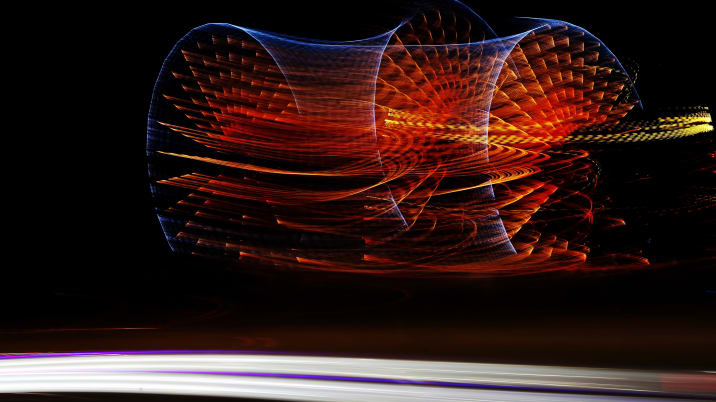 Coming up on ten hours of racing, I'm having a hard time concentrating. Gonna take a break at 14:00. Maybe nap.

Until then, what's going on with #1 Porsche? Almost idling along the shoulder, watching everyone else blast by via dash cam. Which is terrifying. Reminds me of the scene from Talladega Nights when Ricky Bobby tries driving after his accident.

Knowing how touchy real fans can be I'm sure plenty of you don't appreciate the comparison to NASCAR. But it's a very funny movie. Everyone knows that. Best movie about racing ever made. Way better than Days of Thunder. I know there's a Le Mans movie with Steve McQueen but I haven't seen it.

KCMG #47 is off the road at the Porsche curves. Thought they were out? This time for sure though.

#27 SMP racing gets a drive through penalty for overtaking under safety car.

Fourteen hours left, everyone's a little spread out at the moment. Safety car is on the track. Good time to end this installment.

One more live update to go. Will Parker make it, or pass out on the couch? Find out in part three!
X