A bus may be green, but buses are not

Simon Rockman
London has just had mayoral elections and none of the candidates has been prepared to grasp the nettle of transport. 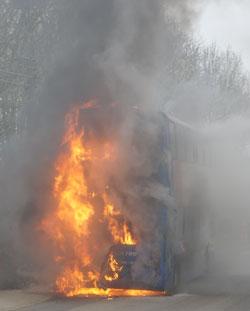 Instead they have looked to be greener, or freeze fares. These policies of deliberately under-investing will leave London a worse city for travel.

It wasn't the same with previous mayors, we've seen the misguided ideas of a congestion zone and bendy buses, the success of the "Boris Bikes" a cycle hire scheme and the success and failure of massive underground train systems called Cross Rail, and no Cross Rail 2. One scheme – an amazingly ambitious airport aka Boris Island was too rich for anyone's taste.

So what we are left with for the new Mayor is a look at buses.

A bus is a fantastically efficient way to move a large number of people. Buses however are not. They are a dreadful system for getting people to work.

The difference is not as subtle as that sentence may make it seem. What lies behind it is that when you want to move a large number of people from one place to another, a works outing for instance, a Charabanc makes perfect sense.

But it doesn't scale. If I want to travel by bus there needs to be a regular service. That means lots of buses have to waft up and down a route in anticipation of there being someone who wants to get on. In a major city, and I live in London, that's good for some of the time. So long as there is a steady supply of people there can be a good number on the bus. This of course doesn't work very early in the morning or late at night when there are not enough people.

What's worse is that buses don't go from where people live to where they work. Unless you live by a bus stop, in which case you have the kinds of people who hang around bus stops hanging around your house, you'll have to walk to it. The same is true at the other end. They you have to wait for the bus. If I walk down to my nearest bus stop and a bus arrives as I get there I think it's a fantastic, special happening. If I walk out of my house and my car is there I think "that's normal".

Then when I get on the bus it doesn't take the most direct route. It takes a route that is designed in part for huge vehicles and in part to go past places where other people might want to get on and off. So everyone travelling has to go via places they don't want to go through for the greater good. And if the bus doesn't go to where I want I'll need to change which multiplies the going-the-wrong-way effect. I once took the 226 from Ealing Broadway to Golders Green, and then an 82 to Finchley where I live. This is a twenty minute car journey, it took over two hours by bus as it wound through a tortuous route. I could have cycled in half the time.

The more "efficient" a bus gets the worse it is. Because when you have a lot of people on a bus it has to keep stopping to let people on and off. I know I'm about as fast as a bus on my bike because every time one passes me as I ride into work I catch up with it at the next stop and have to take my life in my hands as I ease into the traffic to get past only to have the process repeated. If the traffic is busy enough there is a solution. I can ride down the middle of the bus lane and keep the bus behind me. Yes it slows the bus but it was going to stop again soon anyway.

Indeed it's much better for the bus to travel slowly because it's a bit crazy to have something with fifty people each weighing 80 kilos accelerate to 30 mph only to have to slow them all down to a stop 800 yards later because one person wants to get on or off. This ignores the not insignificant twelve tonnes of the bus itself. It would be surprising if, in town a bus manages as much a one mile to the gallon.

But where it really falls down is the need for a steady flow of people. That never happens because people live in suburbs and work in towns so you are always going to get peaks in one direction. For all the buses which travel full to the gills in the oxymoronically named Rush Hour, there are empty ones going the other way. A bus service fundamentally has to be inefficient if it is to be a service.

Everyone has their favourite form of transport, and so thinks it should be prioritised. So the bus drivers hate the cyclists, and the cyclist hate car drivers and everybody hates the taxis.

But taxis are demonstrably efficient. While a bus is massively subsidised – it costs about twice what people pay to transport them, taxis are not subsidised and yet are profitable. A taxi goes directly from point to point and tries to avoid running when empty, seeking out the likely places for fares. A bus has to run empty as part of providing the service.

I'm not going to pretend I have an answer, I can however see that if road space is a precious resource then devoting some of it exclusively to buses is a mistake. Allowing more cars into bus lanes would make sense. If we want to promote electric cars – and whether we do or not is a very different debate – then, even as a cyclist I'd welcome them. I also see scope for a Robin-hood type where rich city types could buy a reassuringly expensive pass which would allow them to drive in bus lanes.

Indeed the only thing I'd have reservations on allowing in bus lanes would be buses. Mixing cycle and buses is crazy. Given that on my bike I weigh a twelfth of a tonne, and a bus weighs twelve tonnes, the decision to put them in the same space is gross stupidity. And I say that not just because twelve twelves make a gross. It really is a dumb thing to do.
X