Rolls-Royce is phasing out the Phantom Coupe and Drophead Coupe. But before it does, the luxury automaker is, as promised, building a few final examples that actually take parts of the assembly line with it.

Called the Zenith Collection, these special-edition two-door Phantoms feature a number of unique upgrades to set it apart, and the most intriguing one is right there in the dashboard. That's where a component from the Phantom's assembly line in Goodwood is housed in a polished, laser-engraved aluminum case with the kind of ornamentation you might otherwise find on a high-end shotgun.

Naturally, that's not all there is to the Zenith editions. They also feature special paintjobs, laser-etched armrests, machined aluminum cupholders, and a trunk fitted with a custom picnic basket, and mini-bar fridge for cooling champagne.

Rolls will only make 50 examples, and they've all been spoken for already. Expect the factory to offer a similar special on the Phantom sedan, orders for which are now being taken before production ends for good. Eventually there'll be a new model line to replace the Phantom – one that promises to be lighter and more advanced, but no less luxurious than the outgoing model. But in the meantime, high-end customers will have to suffice with the Ghost, Wraith, and Dawn. 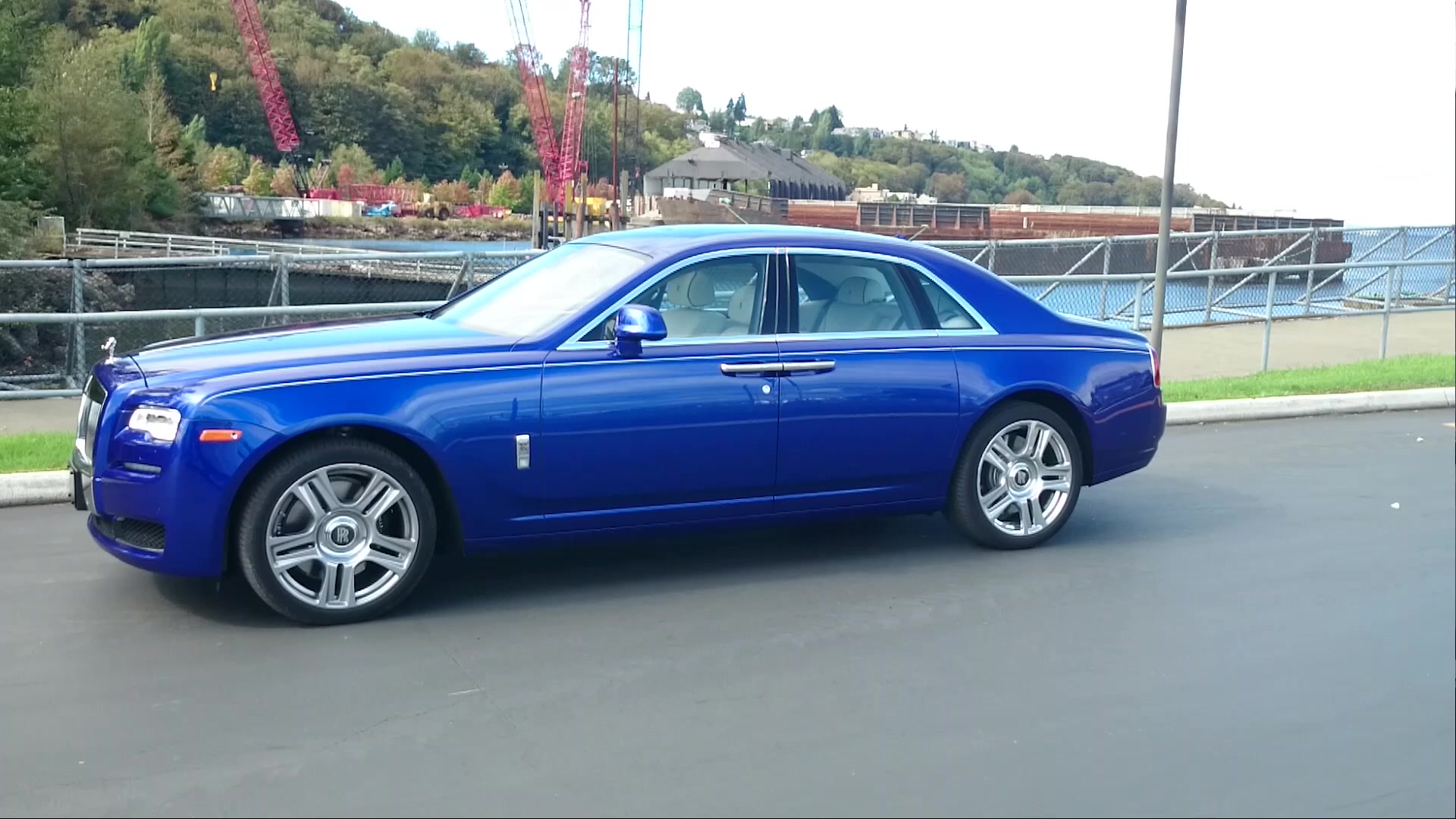 "As we begin to write a bold new chapter in Rolls-Royce history, I am delighted to present a Bespoke Collection that so elegantly celebrates two of the world's rarest and most celebrated luxury goods; Phantom Drophead Coupé and Phantom Coupé. Phantom Zenith Collection motor cars speak of the marque's unrelenting commitment to setting and advancing the standard by which all other luxury goods are judged." Torsten Müller-Ötvös, Chief Executive Officer, Rolls-Royce Motor Cars.

From its foundation 112 years ago, the story of Rolls-Royce Motor Cars has been defined by a restless commitment to setting and raising the standard by which all other luxury goods are judged. On January 1 2003, this philosophy was realised emphatically with the handover of the first seventh generation Phantom to its customer at the newly established Home of Rolls-Royce in Goodwood, England. The world's most discerning patrons of luxury and respected commentators across the globe were instantly endeared to a powerful yet elegant statement of unabashed contemporary luxury. Rolls-Royce had once again established its legend as maker of the 'Best Car in the World'.

Four years later, Phantom Drophead Coupé revived the notion of uncompromised open-top luxury touring; a legacy that is being continued with beautiful effect with 2016's Rolls-Royce Dawn. Phantom Coupé followed in 2008, taking its place as one of the rarest and most celebrated Continental Grand Tourers of all time – paving the way for its natural heir: Wraith which cemented itself as the ultimate gentleman's gran turismo in 2013.

Today, the marque stands on the cusp of a bold new era, following the announcement of the eighth generation Phantom limousine and its all-new aluminium architecture that promises to underpin all future Rolls-Royce motor cars.

Now the time has come for Phantom Drophead Coupé and Phantom Coupé to leave the stage, a moment that will be marked with a remarkable Bespoke Collection, conceived with one purpose; to once again set the highest standard by which everything is judged.

The Phantom Zenith Collection – representing some of the very last Phantom Drophead Coupé and Phantom Coupé motor cars ever to be built, will serve as true collectors' pieces. Indeed all 50 examples have already been commissioned by connoisseur customers who will add them to some of the world's most significant luxury collections, safe in the knowledge that their numbers will never grow and their value will never be eroded by proliferation.

Phantom Zenith Collection serves to celebrate these two extraordinary motor cars with a suite of exquisitely executed bespoke pieces, designed to amplify the beauty and luxury of two of the rarest and best-loved luxury goods in the world.

In conceiving these two motor cars, the Bespoke design team dedicated themselves to understanding how both cars augment the lifestyles of the marque's discerning customers. Every possible detail was considered. For example, the split-tailgate has been enhanced with the addition of a beautifully engineered companion to a perfect touring day's picnic. A glass shelf, housed within the rear section of the tailgate can be effortlessly deployed serving as the perfect place from which to serve Champagne. No concession has been made to compromise. A champagne fridge, large enough to hold two standard bottles and eight Rolls-Royce glasses, occupies a large portion of the boot, whilst the comfort of those who wish to sit on the rear-tailgate is ensured with the use of the finest padded leathers.

Phantom Zenith Collection customers were invited to complete their collection in the finest style with the addition of a special Bespoke version of the Rolls-Royce Picnic Hamper. This unique accessory – created to add a touch of glamour to a day's touring – will be personalised further to match the materials and colour palette of the customer.

On opening the coach doors, owners are greeted with an intricately executed nod to the history of these remarkable motor cars – beautiful laser etching to the armrest cappings. These stylishly express the locations of the global debut of the experimental version of each car (Villa D'Este on the shores of Lake Como for 100EX – Phantom Drophead Coupé's forebear and Lake Geneva for the 101EX, the car that would become Phantom Coupé).

So much of what has endeared the world's most discerning patrons of luxury to Phantom can be found in its exhaustively conceived and executed details. Phantom Zenith Collection celebrates this with a hallmark deftness of touch. The central fascia drawer has been used to house a priceless memento signifying each car's status as one of the very last. On opening, owners discover a removable polished aluminum case, laser engraved with their motor car's unique identification number surrounded with a beautiful application of Best English Blacking – a technique most commonly associated with fine gun-making. Within this, sits a piece of automotive history, not attainable by any other means; a single piece of the Phantom Assembly Line at the Home of Rolls-Royce in Goodwood, England. This remarkable collectors' piece is completed with the expression of co-ordinates, stating the exact part of the Assembly Line from where the metal was extracted.

Both Phantom Drophead Coupé and Phantom Coupé did much to bring Rolls-Royce customers from the rear compartment to the drivers' seat. This is elegantly referenced with three key design touches. The speedometer, is presented in brushed steel – serving to draw the eye towards a key signifier of the car's unique, effortless power delivery. The interior design colour scheme further nods through the use of a highlight leather colour for the front seats that harmonises perfectly with a darker rear compartment. Finally, the Starlight Headliner, a design that made its debut on Phantom Coupé is given a subtle Bespoke treatment to reflect this, with the individually hand-woven stars clustered to the front and faded to the rear – bathing the driver and front passenger in a warm and inviting celestial glow.

In styling the exterior and interior colour and materials palette, designers drew from Rolls-Royce history to create schemes inspired by some of the most celebrated Phantoms in Rolls-Royce history. The subtle contrast presented in the Madeira Red and Jubilee Silver Phantom Coupé, for example, is inspired by a 1930s Phantom II. A bolder, more defined contrast can be seen in timeless yet highly contemporary presentation of Midnight Blue and Artic White that echoes the genteel ambiance of a very special 1930s Rolls-Royce Phantom II Continental, whilst a new glass clearcoat has been engineered to enhance Phantom's mirror-like shine.

Design touches from the marque's recent history also served to inspire. Hints of the 2011 Phantom Coupé Aviator Collection can be seen in the presentation of the central tunnel, whilst Blood-Orange tips to the instrument dials reference Wraith's aviation inspired motif. Further attention to detail is expressed with cupholders, machined from aluminium, serving as a perfect visual and tactile reminder of Phantom's blend of timeless elegance melded to contemporary design. Further use of highly modern materials can be seen in the masterful use of book-matched metal foiling across the fascia of both cars.

These extraordinary motor cars, among the last ever Phantom Drophead Coupé and Phantom Coupés are currently being crafted at the Home of Rolls-Royce. 2016 also represents the final year of production for the seventh generation Phantom limousine, with connoisseur customers invited to take the last opportunity to commission deeply personal, Bespoke expressions of this most seminal motor car. The order books for these very last customer commissions will close imminently.