Emotion hasn't always been Mercedes-Benz's strong suit. For decades, the brand emphasized solidity over passion—but that notion has changed almost as quickly as its nameplates in recent years.

The three-pointed star is getting all touchy-feely now, referring to its thoroughly revamped lineup as families of cars. Anchoring the low-to-mid end of the spectrum is the venerable C-Class, which now includes a coupe that's vastly more evocative (and moderately more engaging) than before.

The 2017 C-Class Coupe is the newest version of the C-Class family that includes sedans, convertibles, the GLC crossover, and even the SLC roadster. It's like a party in the tune of C and everybody was invited, except the C-Class wagon sold in Europe but not the United States. The C300 Coupe is arriving in dealers now, but an AMG-tuned C43 and the full, fire-breathing C63 are due by year's end.

The outgoing C-Class Coupe felt like an afterthought, arriving toward the end of the model's lifecycle. Although it brought some much-needed style to the stodgy C-Class, it wasn't very sporty to drive. Using the new-for-2016 C-Class sedan as a base is a better starting point; the four-door is almost universally praised by critics and consumers alike. 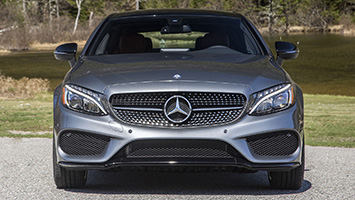 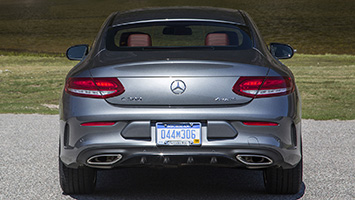 Let's start with its svelte shape. From the rear, the C-Class Coupe is almost indiscernible from the sexy S-Class Coupe that serves as the brand's flagship. Wide tail lamps and a relocated license plate make the C-Class Coupe appear much wider than the sedan, even though the measurements are the same. Up front, Mercedes widened the coupe's grille for a more sculpted appearance. Standard LED headlamps, an upgrade over the halogens on the base sedan, give way to a repositioned belt line that cleans up the car's side profile. If the sedan looks stately, the coupe is its mischievous little brother.

Bigger and sportier-looking wheels are also part of the package. Base C300 Coupes will ride on 18-inchers with all-season tires, but the models we drove on the quiet roads outside of Portland, ME, had $500 worth of optional 19-inch rubber wrapped exclusively in Continental summer tires.

Inside, Mercedes retained the sedan's swoopy dash with its big COMAND infotainment display taking up considerable real estate. The only real difference between the sedan and the coupe is that the two-door's front seats are more aggressively bolstered and accessing the rear passenger compartment is challenging. We did find good room for two adults back there, but coupe buyers should expect an ingress and egress compromise. Owing to the reshaped tail, trunk space is down about two cubic feet versus the sedan. 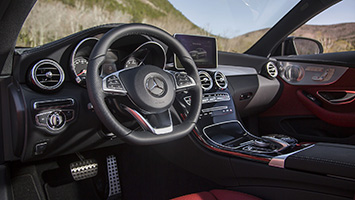 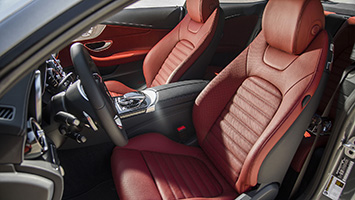 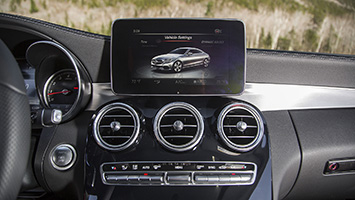 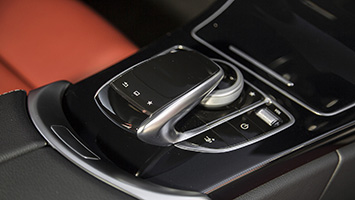 Optional equipment more or less mirrors what's available on the sedan, although the mix of features is slightly reconfigured for the coupe. Popping for navigation requires selecting the $4,500 Premium 2 Package, which also includes a proximity key, blind spot assist that tugs a drifting car back into its lane, and a Burmester audio system. That's a big walk through the options to get a map to show up on the car's dashboard, so Mercedes also offers a Garmin SD card-based system for $625. Mercedes won't say why, but Apple CarPlay and Android Auto are at least another model year out.

Add another $2,900 and you're at the Premium 3 Package, where you gain a host of radar-based features grouped under the Distronic Plus name. The important item here is adaptive cruise control, and a so-equipped C-Class Coupe can be driven hands-free for short distances since its radar reads lane markings. The package also includes Pre-Safe Brake with Pedestrian Detection that will automatically apply the brakes if it detects an impending collision with a car or a human.

Fundamentally, the C-Class Coupe looks the same underneath as the sedan, which means it utilizes a four-link front suspension setup and a five-link configuration out back. Instead, the difference is in the tuning. Three suspensions are on offer: A softer, more compliant base tuning, a firmer Sport Package setup, and an adjustable air suspension. Mercedes positions the coupe as a sportier alternative to the sedan, so even the base is said to be a bit firmer. We don't know if that's the case since the only C300s available during our evaluation in Maine were fitted with the sport suspension or the Airmatic. A shorter steering ratio is designed to provide the coupe with a tighter feel. 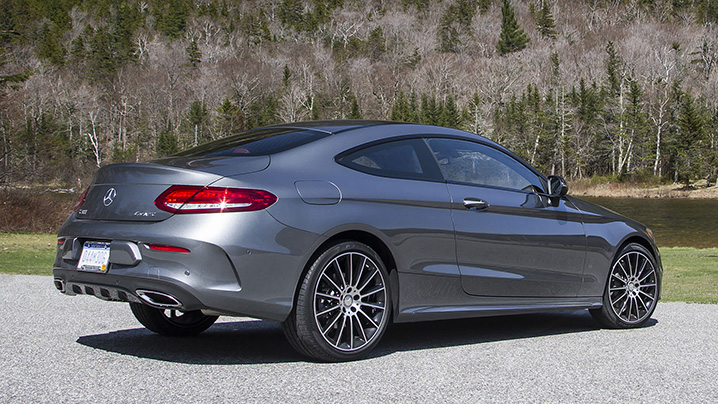 The C300 coupe's powertrain is carried over from the sedan: A 2.0-liter turbocharged four-cylinder that puts out 241 horsepower and 273 pound-feet of torque can be mated to either rear- or all-wheel-drive. Power hits the pavement via a seven-speed automatic gearbox regardless of drive wheels.

Although most rural Maine drivers putter along under the speed limit, a relaxing break from faster-paced cities, we had ample opportunity to exercise both Sport Package and Airmatic C300 4Matics. Try before you buy: The Sport Package endows the C300 Coupe with a rigid ride easily upset by frost heaves. Airmatic, meanwhile, offers a desirable degree of flexibility. In Comfort mode, the coupe glides confidently over rutted terrain. Turn the wick up in Sport or Sport+ and there's less lean in corners. Even though the coupe's steering is a little sharper here than in the sedan, the wheel delivers relatively limited road feel and provides this two-door with more of a neutral, grand touring atmosphere.

Careful intake tuning has resulted in a more guttural growl from the 2.0-liter here than in the sedan. Around Portland, the engine idled smoothly and offered immediate grunt, but our long drive was enough to reveal occasionally clunky low-speed shifting from the automatic. Slipping it into Sport mode instead of the default Comfort setup cleared things up without resulting in the kind of aggressive throttle tuning the track-oriented Sport+ delivered.

Mercedes hasn't created a coupe dripping with personality, but the glittering grille and muscular haunches are enough for us to overlook the C300 Coupe's mild driving experience and instead appreciate its svelte style. It's a head-turning two-door for those willing to pay the hefty price of admission – $43,595 to start. Despite Mercedes' sporty ambitions, the C300 gets by in large part with its looks – and that might be just right for buyers since this segment, which includes the Audi A5 and BMW 4 Series, has become more about style than about performance. 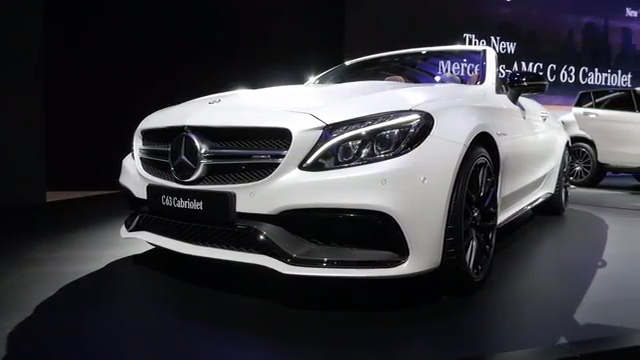