Because not every California T buyer wants a softer Ferrari.

There was a time when snow, rain, and even thick traffic were higher up the list of Ferrari's enemies than Porsche. These were mostly weekend cars, but even wet roads would see them snugly tucked up in their heated garages, and not just because to avoid scrubbing muddy shoe prints out of the carpets. Some of them were difficult enough to handle in the dry, and slick pavement sure didn't make them any more tolerant.

The hottest modern Ferraris still don't enjoy being stuck in heavy traffic. Not for any mechanical reasons, mind you. They just don't bother hiding their utter disregard for the mundane, or their disregard for a driver forcing them to endure it, because they feel it's beneath them. And it is.

That's where the California came in. Launched in 2008, the retractable-hardtop convertible is the most approachable in the company's range. It was aimed at newly moneyed buyers who weren't saturated in supercar folklore and wanted the badge, but not necessarily all of that attitude. Some, but not all. 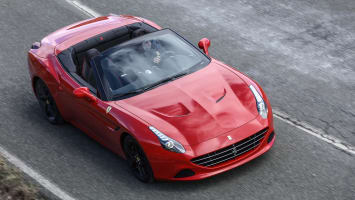 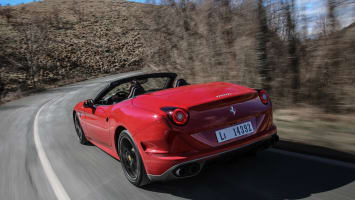 There are those California buyers who want the convenience with a little more attitude and the trademark crankiness. So, as it did with the original California, Ferrari has added a Handling Speciale Package to the new turbocharged California T's repertoire. This $8,120 option turns the least expensive Ferrari into something that's stiffer and faster and more fun, and the trade-off is a slightly firmer ride, all the time.


30 percent of Ferrari buyers would be happier to dump some of the California T's comfy ride in favor of more grip and more crankiness.

Ferrari has left the core of the California T's engine untouched, so the 3.9-liter, twin-turbo V8 still has 557 lb-ft of torque from 4,750 rpm and 553 horsepower at 7,500 rpm. Like on every California T, the engine's boost manager only lets you access 442 lb-ft in the first three gears, with each successive gear unlocking a little more torque until you reach seventh, where the maximum is available. This helps make the California T drivable and has the added benefit of flexibility once in the tall top gear.

While that is all stock on the California T, the seven-speed dual-clutch Getrag gearbox is the first part of the car to receive the Handling Speciale treatment. Ferrari rewrote its software to make it shift more aggressively both up (30 percent quicker) and down (40 percent quicker), particularly in the car's two sportier driving modes. 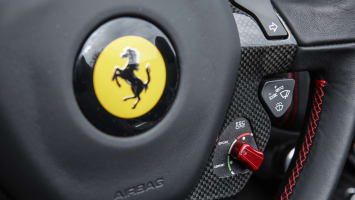 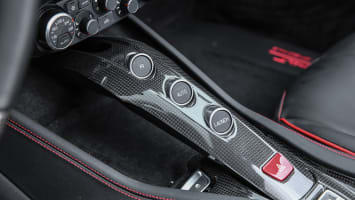 The exhaust note is different, too, with Ferrari fitting a pair of Helmholtz resonators to lift the sound by around 3 decibels across the rev range, but the engineers particularly focused on the engine speeds from 1,500 to 2,800 rpm – the moving-through-traffic bit they expect to be used on any given workday.

The Handling Speciale's other massive tweak is the suspension. Its front springs are 16 percent stiffer and the rear springs are 19 percent firmer. The active magnetorheological dampers have been tuned to the new spring rates. Ferrari's engineers, who love to trot out technical jargon other sports-car makers never make public, say the new setup lowers the body's roll velocity by seven percent and lifts the car's corner-exit speed by 3.8 percent. So there.

They've left the cabin untouched, which wasn't the worst idea. There are a couple of tiny exterior design fiddles like a change in grille color (go on, try to claim you spotted it) to mark the Handling Speciale out to the tifosi. The Cali T's cabin is a comforting and elevating place to soak up miles in. The small, unintended curves and warbles in the leather stitching show clearly that it's done by hand, but the leather is beautifully soft and the carpet is cosseting. There is the same carbon-fiber arch over the center console's bits-and-pieces tray, and it's just a lovely piece of design, holding the buttons for the Automatic mode and the hazard lights, among others. The air-conditioning controls are intuitive to use (though the rushing air coming from the vents is sometimes obtrusively loud) and the navigation works rather well.

Ferrari insists the extra noise is now wake-up-the-neighbors loud, but we didn't find it as prominent as expected, largely because at startup the exhaust is in its most genteel mode (you know, the one that helps it pass noise regulations). It's deeper and more authoritative, but the sound won't grow tiresome for someone using the car as a daily driver.

And so we flicked the manettino drive-mode selector switch to its middle sports setting and waited for it to rip the air to shreds. But it didn't. The California T hasn't lost any sophistication in its clamor for more noise, so don't expect the engine's timbre to gradually and precisely ascend into the stratosphere like a naturally aspirated Ferrari motor's.

Instead, the music maestre at Ferrari delivered a new sound signature that edges towards the soaring songstresses of the naturally aspirated era. There's a wonderful aural combination of menace and sweetness to it that you could, genuinely, live with every day. Unlike most turbo motors, more revs doesn't just mean more noise, but instead more depth and timbre and a higher pitch.


There's a wonderful aural combination of menace and sweetness to it that you could, genuinely, live with everyday.

The only downside is that it feels like the noise-production system is just hitting its stride when the shift lights at the top of the steering wheel come on and demand another gear. That, and almost all of its noise is generated by the exhaust; you can't hear the front-mounted engine's exertions at all. No intake sound, no mechanical clatter, nothing. Just some steering-pump whine now and again.

The transmission is, by way of compensation, quite unmistakably faster. Up, down, whatever. It's incandescently quick, a mechanical transaction that's now so utterly brief that you think you might want another gear, and your fingers have twitched it into existence before your synapses can possibly have fired the instruction to them. It's all a lot more complex and engaging than that, though. Anybody could have made it faster. Ferrari has nearly halved the shift times and simultaneously tripled the interesting.

It's fun enough on hard acceleration, where you pull the next gear without lifting off the gas and the Ferrari delivers a sharply delineated crack in the soundtrack. There's barely a ripple of vibration or jolt through the cabin, and the exhaust note sounds a bit deeper and richer with each passing gear. The downshifts stole the show during our photography session on Italy's SS1, the ancient Roman road Via Aurelia, a contender for the title of oldest continuously used road. The valleys echoed to the sound of California T Handling Speciale downshifts, with five of the things making enough noise for 25. 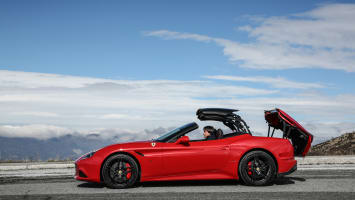 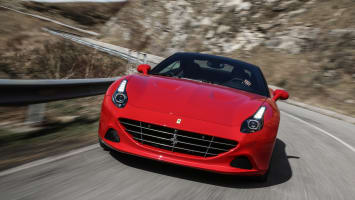 There are few things that generate mechanical wonder like coming into a tight corner in the California T Handling Speciale. Mash the Brembos down onto their carbon-ceramic brake discs on approach, tug gently on the left paddle, and the Ferrari snaps down another gear. It's done, cracking home with an audibly savage braaap, almost before your nerves have finished telling your finger muscles to contract.

It's also fabulously fast, blistering to 62 mph in 3.6 seconds, punching on to 124 mph just 7.6 seconds later. And this is the "everyday" Ferrari.

It's imperfect, though. Cruising in an aggressive setting will assail you with a constant-throttle drone so annoyingly monotonous that you'll have to reach for the manettino to change modes and back the noise off sooner or later. So do it sooner. The only major difference between the noise levels top up or down is that with the roof in place the hardtop circulates some of it around the cabin a little better. The sad news is that the car still has to be stationary before Ferrari will let you put the top up or down.

The noise is one thing, but Ferrari is really pushing the added handling prowess, and it's right to, but the engineers are not telling the whole story. Up in the mountains, the car's handling was sure-footed, sharp, crisp, and aggressive, and its grip levels and balance were nice and clean. But it never quite reached the levels we were expecting. There was nothing scary about it, but we'd hoped for better pull out of corners and wanted its understeer limits pushed further north. Don't read that to be a negative, because both of those things occurred at ferociously high speeds in real terms. We just expected it to give a little more.

We found that missing something by pushing the car's Bumpy Road button. That transformed it into the car we always hoped it might be. First suggested by Michael Schumacher for the 430 Scuderia, the Bumpy Road button keeps the damper rebound settings soft even in the car's sportiest powertrain and skid-control modes. Push it and the Handling Speciale shines; it should be thought of as the default setting for anybody who ever drives or owns one. The car might not feel as pointy or sharp, but it does everything better this way. The balance seems to shift further rearward, making the car handle more neutrally mid-corner and, especially, from the point where the driver picks up the throttle again. It lets the tires keep hugging the tarmac, where they just marginally, but frequently, bounce out of contact if the dampers are left to full manettino control. 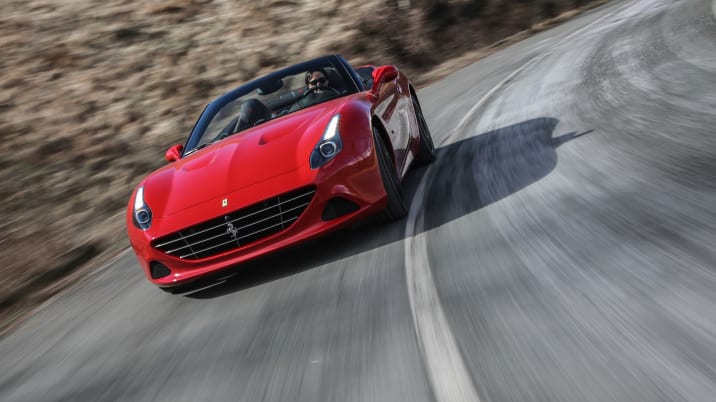 It works wonders elsewhere in the car, too, making the lightly weighted steering feel much calmer. And it delivers unprecedented confidence to push it in the first half of corners, letting the car carry more speed and showing off the new spring balance to its best effect.

It goes from being a car that runs out of grip at the front to a car that feels like it will never run out of grip at all. Even when it does, it's so progressive and positive that even the moderately skilled will easily haul it back into the safe zone, even with its skid-control systems switched off. Moreover, while the softer-damping trick works well on smooth roads, it's more impressive the rougher the road surface becomes.