Fixing the face of the Tesla Model 3

When the stage lights came up to illuminate the latest automotive design work of Franz von Holzhausen – the Tesla Model 3 – some of us felt a slight pang in our chests. While overall the lines of the electric automaker's more accessible sedan are pretty sweet, the fascia is a bit, um, different. The upturned snub nose might help the Tesla team achieve the astonishingly low drag coefficient of .21 that CEO Elon Musk mentioned on Twitter was its target, but at the cost of looking like Daffy Duck, post cartoon collision with a wall. 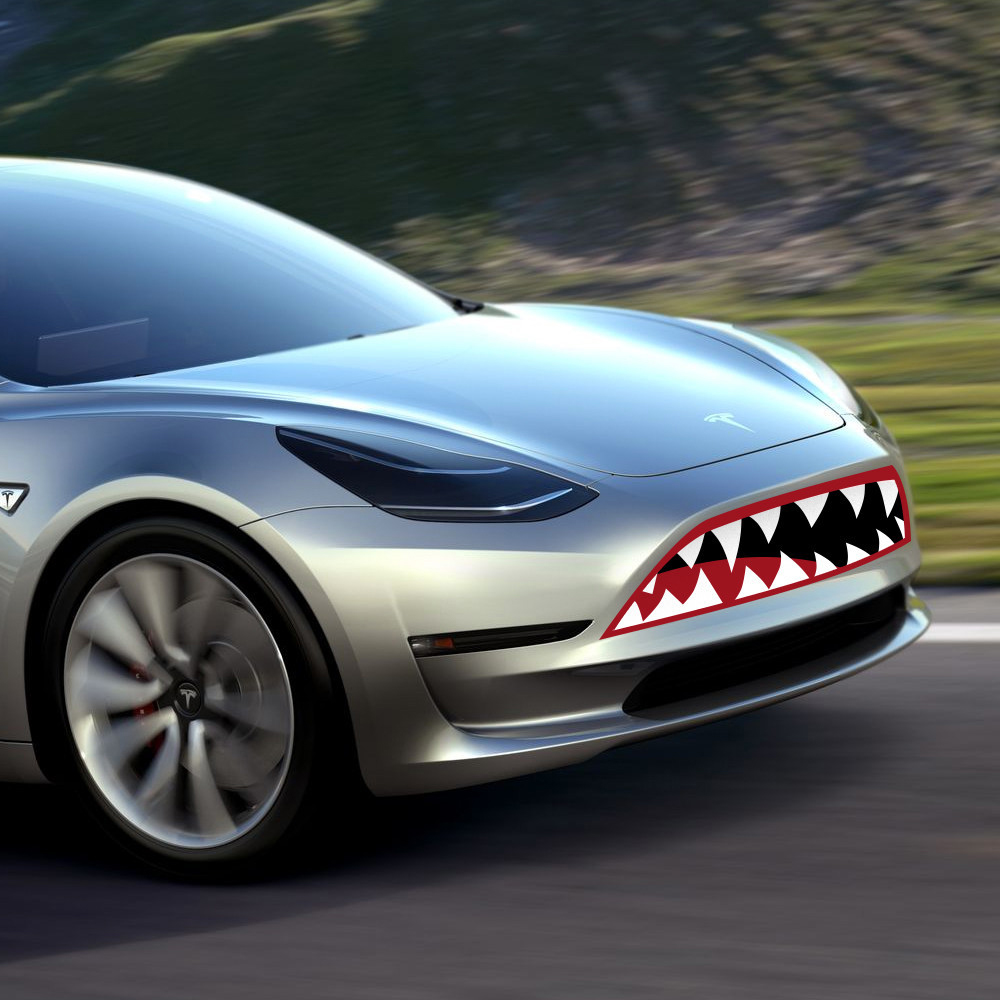 With over 325,000 people already putting down $1,000 for the privilege of waiting in line for two years, the peaked beak is obviously not a deal killer. But, since this initial design is still subject to slight change, some creative individuals have been putting forth their ideas of how to "fix" the face. There have been two approaches – redesigns and appliques.

For some, the broad, empty space on the nubby nose is a canvas of open opportunity, just waiting to be personalized. Take, for instance, the stylized Flying Tiger shark face (right) from the folks at Tesla3Grilles. The outfit may also offer some simpler fang motifs. Others, like Tesla Motors Club Forum user AusM3, aim for the traditional look by adding the image of a chromed Aston Martin grille to the fascia.

And then there are those who would like to just redesign the Model 3 snout. In a thread over at Tesla Motors Club, user Mihai75 presented an image that turns the snub into more of a point, later altering it further with suggestions from user James Anders taken into account. Meanwhile, over on the Tesla Model 3 Facebook page, Hai Le showed off his image-altering ability with an example that seems to build on this work, rounding off the front and making it more than a little Porsche-like.

You can check out these five images above, and tell us what you think in Comments. Maybe, though, the front end is fine as it is. Perhaps, our dissatisfaction is due more to awkward camera angles than suspect styling. Check out the video below, that shows the Model 3 from eye-level and at a slight distance. Looks a bit better, yes? While we don't know if any changes will be made, it's fair to say it probably won't have a big impact on demand either way.