Chris Bruce
A 17-year-old high school senior from Richmond, Texas, died in a 2002 Honda Civic on March 31 after the Takata-supplied airbag inflator ruptured. This is the 10th fatality linked to the faulty parts in the US. Honda and US regulators confirmed that the airbag exploded, according to Reuters.

The fatal incident occurred when the Civic's driver rear-ended a Honda CR-V. The teen was wearing a seatbelt and wasn't speeding. "Everybody should have walked away from this," Fort Bend County Sheriff's Deputy Danny Beckwith told Reuters. However, a piece of shrapnel from the inflator cut the driver's carotid artery, and the person died.

With this latest fatality, there have been 10 deaths and over 100 injuries in the US from exploding airbag inflators. Nine of the deaths have happened in Honda vehicles. The other was in a Ford Ranger pickup.

Investigators at the Independent Testing Coalition placed the cause of the explosions on a combination of the inflator's chemical, design, and the weather. The ammonium nitrate propellant can explode with additional force when exposed to moisture, like in high humidity areas. The part's construction is also part of the problem because it allows this humidity to access the chemical.

Takata has recalled roughly 24 million airbags in 19 million vehicles in the US. The latest tally from the National Highway Traffic Safety Administration showed that as of March 11, 2016, about 7.5 million inflators have been replaced. All the parts with ammonium nitrate inflators may need replacing someday, which could affect 100 million vehicles.

During an inspection today, accompanied by representatives of the National Highway Traffic Safety Administration (NHTSA), the Sherriff's Department of Fort Bend County, Texas, and Takata, American Honda confirmed that the Takata driver's airbag inflator ruptured in the crash of a 2002 Honda Civic on March 31, 2016, in Fort Bend County, Texas, resulting in the tragic death of the driver. Our thoughts and deepest sympathies are with the family of the driver during this difficult time.

Honda has shared all available vehicle history information collected to date with NHTSA and will continue to cooperate with NHTSA throughout the process of investigating this crash.

Since 2011, the vehicle involved in this crash has been included in multiple recalls and a market campaign. Multiple mailed recall notices were sent over the course of several years to registered owners of this vehicle, including the current registered owner. Our records indicate that the recall repair was never completed.

Honda currently has sufficient supplies of replacement inflators to complete the required repairs under the open recall that affects this vehicle, and we continue to encourage all owners of affected vehicles to seek repair immediately.

*Note: For the purpose of clarification, while replacement parts are available for the Takata airbag inflator recalls announced prior to 2016, including those recalls affecting the above-referenced vehicle, replacement inflators for the driver airbag inflator recall announced on February 3, 2016, which are being sourced from an alternative supplier, are not yet available as of the date of this statement. Honda expects to begin receiving replacement inflators for this latest recall within the next few days, and owners of affected vehicles will receive a mailed notification inviting them to pursue repair when parts are available for each individual vehicle. 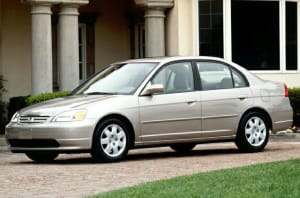