Crashing a Ferrari was the best life lesson I've ever had

Igor Faygenbaum
I screamed out a string of expletives as the gleaming Rosso Corsa-bodied F430 spun sideways through the curve, locking up the brakes, and sending the $240,000 Italian masterpiece sliding into the forest, coming to an abrupt and grinding halt, narrowly missing the tree line and avoiding my untimely death.

As the proverbial dust had settled, I knew that I had been through one of the most harrowing experiences of my life and I was alive to tell the story. I knew for sure I would never live this down, not financially and definitely not socially ... or so I thought. Big mistakes often have a polarizing effect where on-one-hand we don't have a real way to know the scope of the damage and this results in fear of the unknown, but on the other hand we usually know we're okay and this results in strange internal calmness. For me this experience led to a major life lesson, an amazing story to tell, and a level of humility that served to be instrumental in all of my future endeavors.

Throughout my entire childhood I had built up an obsession with Ferrari. I grew up with a poster of a yellow F355 Spyder above my bed, and like many kids I admired fast, ridiculous, and unattainable cars. Fast forward to adulthood, I found an opportunity that coincided with my love for these cars and a chance to drive one from the lauded brand as a birthday present to myself. A local exotic car rental business had a package that allowed you to test drive six exotic cars from various manufacturers, each more colorful and ostentatious than the last. I knew this was my chance to come up close and personal with the cars of my dreams. That is, until the whole experience went awry.

On the day of my dream car tour, I drove myself and a friend to the New Jersey headquarters of the rental company. Greeted by nearly two dozen of the finest exotic vehicles available for purchase, doors open, the visual experience alone proved to be astounding. In addition to completing a slew of legal paperwork, we were all required to watch an introductory safety briefing, complete with photos of various past mishaps on the tour. The instructor stressed the importance of safety and actions we should take care to avoid. Our carefully planned route along the winding hills of Harriman State Park were detailed prior to departure. Each of the six drivers for that day would take their allotted turns at commanding two-Lamborghinis, two-Bentleys, one-Maserati and one-Ferrari.

As the day began, I took my place at the driver's seat of a bright yellow Lamborghini Gallardo convertible, the biggest smile of my life appeared as the car roared to life. We proceeded to, in varying degrees of aggressive piloting, make our way through the New York-New Jersey border towards Bear Mountain. With each stop, we had a new chance to explore the vehicles provided for that day. The goal in mind was to sample the different sounds, feelings and emotions each of these carefully handcrafted autos had to offer; a sensory experience beyond anything else. We drove single file, with a lead car and follow car guiding us through the route. It was glorious; adrenaline-surging, eyes widening, the experience thus-far was just as I imagined it would be. I took full advantage of the liberties granted; tires screeching, exhausts fuming, redline pinging each of the three cars I had to sample before the inevitable happened.

After receiving the keys to the Ferrari on our fourth stop, my heart skipped a beat.


Surely this was the experience I was waiting for all of my life. I walked around the car, carefully taking in each detail, anxiously awaiting my chance to bring dreams to reality. I took my place late in the cue, as I was acclimating myself to the controls; second to last, ahead of the follow car. We drove out of the gas station, single file, onto Bear Mountain Bridge Road. At this point I realized I was stuck behind multiple pedestrian cars, driving at a rate of speed deemed unacceptable to someone in a 490 horsepower exotic. It was then that I made what was possibly one of the single most questionable judgements in my entire life. I jammed the throttle all the way down, overtaking 3 separate cars in the opposite lane leading to blind left handed sweeping uphill. The tachometer instantly pinged its 8500 RPM redline, accelerating to what was presumably a triple-digit-speed unacceptable for the upcoming turn. As I swerved the more than capable body of the Ferrari back into the right side of traffic my eye caught a glimpse of the literal warning sign ahead. The turn had a marked sign indicating the maximum allotted speed was 25 Miles Per Hour. Excitement turned to panic. I attempted to slow the car, downshift the F1 transmission, stomp on the carbon-ceramic equipped brakes, turn the carbon fiber laden steering wheel. Nothing would save me now. The brakes locked up, sending the car skidding sideways at double the speed limit, descending off of the paved road into the direction of the forest. Time came to a halt, and what felt like an unreal turn of events was transpiring. Dirt showered our faces as it flew through the open windows while the car dug into the ground coming to a hard stop. 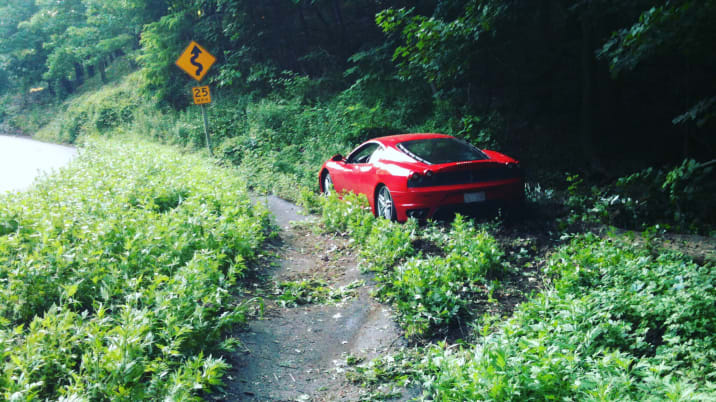 This was it, I was sure life would end. Here and now.


The car was frantically beeping with multiple dashboard warning lights, and I was at the height of a panic unlike any other. I stepped out, hands on head. A chill descended down my spine knowing that I had done something that nearly cost my life and laid waste to a car that was worth more than the combined total of all of my material possessions. I watched as steam came pouring from under the car suddenly reminding me it was still turned on. I scrambled to shut off the engine, fearing it would go up in flames. As the follow car arrived, the driver exclaimed to me:

"Who do you think you are, Michael f***ing Schumacher"!?


We anxiously awaited the arrival of the police and documented the gut wrenching scene. Each passing car gawking at the sight, and me, pale faced, heavy hearted. Once the state trooper arrived, I provided my account of the events, only to be handed a citation, adding insult to injury. After two hours an ill equipped flatbed tow-truck arrived, along with a gentleman who had no-doubt never in his professional career had to pull a six figure Italian exotic from a roadside ditch. The car crunched and creeked, as we watched in horror, expecting the worst. But as the car emerged from the greenery, it appeared to be without major damage. Sure, the $15,000 carbon fiber front splitter was cracked and the $2000 front wheel was bent, but the car was free of any real destruction. Despite a bruised ego, and having to forfeit the ability to drive the remaining selection of cars, I was alright. More importantly, I hadn't hurt anyone else or caused any serious damage. We were driven back to the facility, where the owner was both understanding and surprisingly unfazed. It seemed to be a common occurrence. 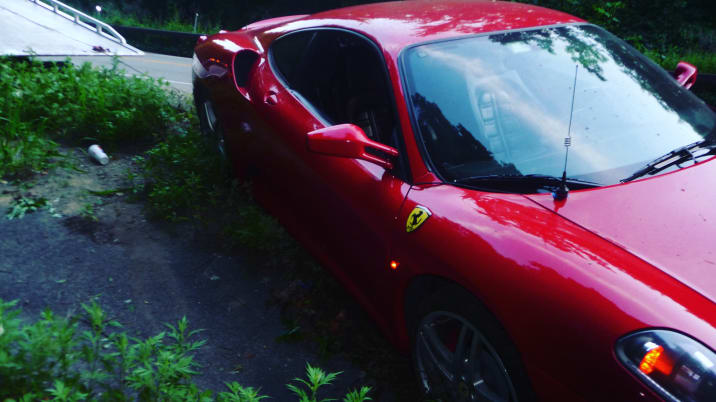 All in all, I had lost some money from a security deposit. I was dropped from my auto-insurance policy for having to cover a grand total of over $30,000 of mostly cosmetic damage, which is tough to explain. I Fought that moving violation until it was dismissed three years later. I had high auto-premium costs for a while. But guess what? I had an incredible story to tell and most importantly I was alive. After all, how many people do you know that crashed a Ferrari and lived to tell the tale?

It's easy to say that respecting the car would have been a wiser choice, especially given all I knew about the car, but hindsight is 20/20. As for Ferrari, I still admire the brand, I now approach fast cars with far more caution.

I learned many valuable lessons from this entire experience. While no-one likes to admit they've made a mistake in overestimating their driving skills, this was a major one. I let my excitement get the better of me and paid the price. From this, I learned the value of humility in admitting defeat; something I carry with me to this day. I am a far more careful driver, I know to not rely on emotions to justify my behavior, and I know that you can rebound from even what is seemingly the biggest mistake you've ever made. I use this experience to remind me that the unexpected is always around the corner, sometimes literally. Always strive to be prepared and don't make uncalculated decisions even if they feel right at the moment. Don't overestimate skills that have never been thoroughly proven. However, do not keep yourself from being able to make mistakes, they are crucial in your journey. So long as your mistakes are not irrational, and you strive to think things through, you will emerge to be wiser from them.