Unparalleled luxury with a view.

There is apparently a migration of sorts among the set that would buy something like the 2016 Rolls-Royce Dawn, the newly arrived drophead variant of the raffish Wraith. When our theoretical Dawn buyer finds the Cote d'Azûr or some such place a bit chilly, perhaps it's off to South Africa. Late March is the tail end of summer, and it's an exceedingly pleasant way to get into the Dawn state of mind.

Stellenbosch is just northeast of Cape Town, the "Mother City." What used to be open country occupied primarily by the Khoikhoi and Khoisan peoples, as well as prototypical African game, is now wine country. Our starting point is a vineyard estate called Delaire Graff owned by a diamond baron. South Africa's diverse and stunning countryside is on display as we leave the vineyard and climb. The lower highlands are covered with quasi-Californian scrub, but with altitude the scene transforms into a mist-tickled moor full of low heather-like plants and tumbling rivulets. We traverse the suburban lowlands to a windy road clinging to a cliffside above the crashing surf of the Indian Ocean. Ancient cliffs and peaks jut over us at improbable angles and in fascinating shapes. At the end of our drive, looking across False Bay, the Cape stretches south towards the equivocal boundary between two oceans. Twice and then once, the Cape lighthouse winks at the end of Africa. 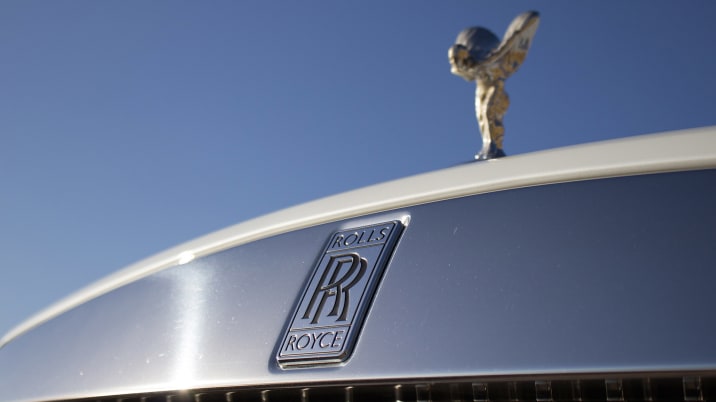 Most automakers consider sportiness the ultimate attribute. Like its stablemates, the Rolls-Royce Dawn's draw is its timelessness and unabashed luxury. Here that's paired with the inherent hedonism of a convertible, not to mention the cachet that comes with spending $340,000 or more (most likely more) on a car. That figure makes the Dawn more expensive than the Ghost or Wraith, but less than the Phantom range.

The Dawn is vast; like most huge things, it commands attention because it takes up so much space. Watching my colleagues dart around town was a bit like watching a flotilla of cruise liners maneuver to their moorages. Like a yacht with a lot of freeboard, the flanks rise impressively to the top of the door, but then there's some tumblehome inward to the thick brightwork strip ringing the cabin. A longitudinal spear of chrome bisects the hood, a bit like a grab-rail on the foredeck. The Spirit of Ecstasy could have graced the bowsprit of any of the windjammers that hove into Table Bay.


Twice and then once, the Cape lighthouse winks at the end of Africa.

While the profile, and particularly the roofline, makes the more expensive Phantom seem positively fussy, to this eye it's not attractive as a whole. Many elements, in isolation, are elegant. And the Dawn certainly conveys the power and sophistication of its owner while impressing rather than delighting the onlooker. That's fine. This is a car designed to satisfy its occupants – all four of them. Rolls-Royce is adamant that this isn't a " 2+2," but rather a proper four-seater with full-sized rear thrones. Semantics or no, the company has it right. Think in terms of hours of tolerability. Up front in the Dawn, you can drive until you die or run out of gas. In back, I'd say you have at least five hours of seat time before you need to unfold yourself. It's supremely comfortable, and I'm not affording any handicap for the bodystyle.

With the top up, massive C-pillars constrain outward visibility. Rolls-Royce admits it made the rear window smaller than it needed to be to give the impression of "a private sanctuary." Mission accomplished. There are hermit caves that are less divorced from the chaotic outside world. It's Lexus-inside-a-sealed-tomb quiet. 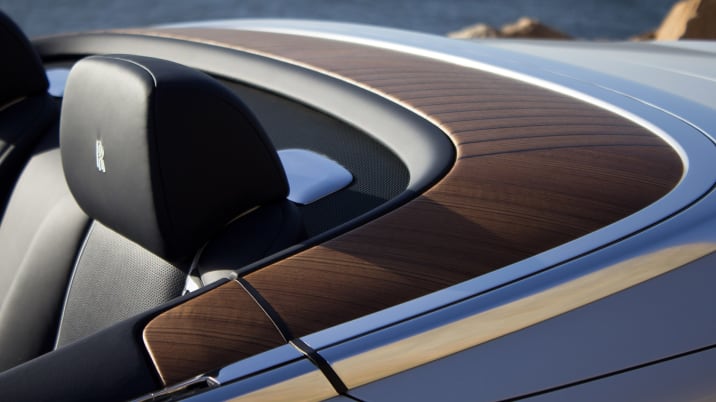 The top folds down in about 20 seconds at speeds up to 31 mph, so it doesn't take a panic stop to cover up in a squall. Rolls-Royce calls the mechanism's operation "The Silent Ballet," a pretentious name for an impressive process. Top down, wind buffeting and noise up front are extremely subdued, even without a windblocker. In comparison, the rear-seat experience seems like sticking your head in a wind tunnel, but on reflection it's on par with what a front-seat occupant experiences in a normal convertible.

One note for those unable to travel light: trunk space is limited. Considering the ample rear seat comfort, it'd be easy enough to put two couples in the car and drive a long way off, but they'd have to send the baggage along in another car. Two overnight bags will fill it close to bursting.


Elegant, diminutive switchgear is a rarity in a world where watches, not wall clocks, measure 48 mm or more.

Many brands have a door-related party trick, like Lamborghini's eponymous and crowd-pleasing scissor jobs, or the subtler dihedral opening McLaren prefers. The Dawn's "suicide" doors, although Rolls-Royce will probably cringe to hear the vulgar term, are striking enough to root passers-by to the sidewalk and weld their eyes to the massive slab closing itself, electrically, at the push of a button.

Door securely fastened, it's time to consider the interior. Our white example is trimmed in black and blue leather and vast swaths of beautiful light wood veneer. Most things in the interior feel properly weighty and solid. The conventional gauges are finished like vintage Swiss chronographs begging for large knurled crowns to wind them with, and the "Power Reserve %" gauge is both whimsical and less pedestrian than a tachometer. The steering wheel's rim is thin but not delicate, perfectly matched to the leisurely ratio of the steering rack. My favorite touch inside is the thin, delicate stalk that adjusts the steering wheel's rake and reach. Elegant, diminutive switchgear is a rarity in a world where watches, not wall clocks, measure 48 mm or more.

There are precious few sour notes that distract from (but don't overshadow) all the brilliant parts of the car. The hard plastic surround for the headlight controls is in a prime part of the dash and in the line of sight of the driver. A wood veneer or merely a different texture or finish would do much to improve the view. Our Dawn's speaker grilles are a generic tight black metal mesh; even the Mercedes-Benz C-Class has beautiful perforated metal grilles, for $300k less. Were I a discerning buyer, this would serve as a short list for my new friends at the Rolls-Royce Bespoke shop to rectify. It was a challenge to find even these nits to pick. 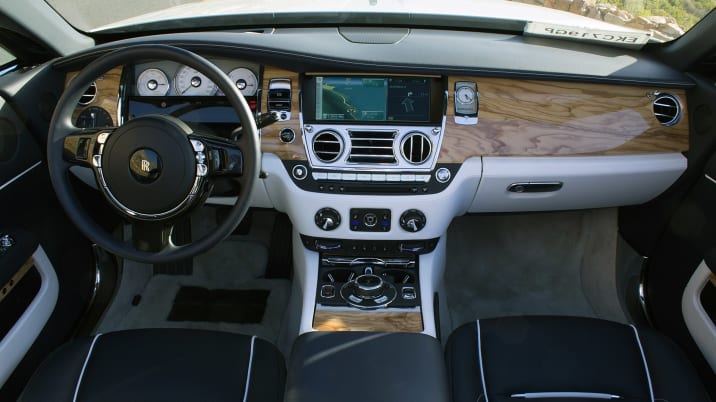 Standing or straining, the Dawn is a quiet animal. Stomp it and there's a distant whoosh, turbine whirl and intake rush happening a long way off to somebody else. Sound is scarce, but not torque. There are buckets and gobs and shipping containers full of the stuff, delivered hot and quick. A light touch gives a stately response, acceptable for casually steaming away from a stoplight. A heavy stab signals the boiler room to pile on the coal, and a freighter's worth of twist churns aft to the wheels. 563 horsepower is a fine number, but there's 575 lb-ft ready to oblige at just 1,500 rpm. The raw numbers don't do justice to how quickly a 5,644-pound convertible will muster an unreasonable speed.

Credit goes to BMW's bi-turbo, 6.6-liter V12, which does a superb job emulating the classic British motoring ideal of having so much torque that gear selection is immaterial. The Dawn has eight such indifferent gears, courtesy of ZF's all-conquering 8HP90 automatic. The ZF auto is virtually seamless up the range. There's a linear, almost electric-motor feel to the Dawn's powertrain. It hunted once trying to downshift after an awkward corner coming down a pass, but otherwise it was unflappable. It should be noted that the impeccable ZF box uses GPS data for predictive shifting, not that we could tell.


A heavy stab signals the boiler room to pile on the coal, and a freighter's worth of twist churns aft to the wheels.

Our drive route took us through some lovely switchback passes. To be perfectly unfair, the Dawn rolls. At least it's a tidy motion, smoothly from side to side, and without disconcerting float or sway. Coming from a regular car, the biggest adjustment to placing the Dawn in a turn is the very slow steering ratio and large steering wheel. Once you compensate for that, the Dawn acquits itself admirably, hustling along without drama at a pace beyond which it's ever likely to be driven.

The big convertible is hydraulic-suspended-Citroen smooth, as if it has four feet of plushly damped shock travel. Just enough information comes through the chassis to prevent the feeling that one's lower body has been pumped full of Novocain. Braking for speed bumps (at moderate speeds) is largely optional. It's not a sporty ride, but Rolls-Royce says that the Black Badge models will bring that to the table. The roads along our South African drive route are remarkably smooth if a bit twisty, but even over rougher surfaces the Dawn will likely provide multi-hour comfort.

Designer Alex Innes said that being a convertible as well as a Rolls-Royce, the Dawn will frequently be a reward for its buyer. A wealthy entrepreneur buys one to celebrate a successful acquisition, or maybe its purchase marks an important birthday for a spouse or partner. Like a fine Swiss watch, it's partly a trophy, partly a useful object. 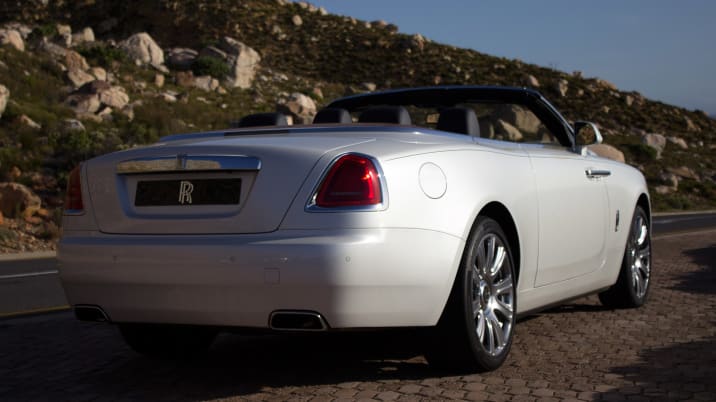 Most Dawns will be customized, at least in some small details. Phantom owners often spend the value of the car again at the bespoke shop. Ghost, Wraith, and likely Dawn buyers will be more likely to choose a unique combination of semi-custom and catalog options. Americans are the least likely to fuss; they'll drive off in a non-preferred color combo if it means they can have it today.

As we've said before, Rolls-Royce is not much for highlighting volume, but it's quietly selling cars at an unprecedented rate. Having driven the Dawn throughout the fascinating Western Cape, poking and prodding and mulling over its imposing dimensions and singular dedication to enthralling discerning occupants, it seems like the Dawn will be another massive success for the brand, particularly in warm American and European climates. To use the earlier analogy, it seems a fitting trophy. It embodies many of the aspects its owner wants to convey, like sophistication and success, and projects them radiantly. You're somebody when you're driving the Dawn, a rich and enjoyable experience. The experience is one of luxury divorced from contemporary norms, a truly timeless experience that even a fantastic conveyance like the Bentley Continental GT Convertible can't fully express. The best compliment I can give the Dawn is that there's nothing else truly like it. Drive one and you'll understand.