Andrew Ganz
The Ghostbusters, or at least the movie franchise, will emerge from Hollywood's cobwebs this summer, but instead of the iconic 1959 Cadillac known as Ecto-1 that delighted big screen audiences in 1984, the new model may leave some scratching their heads.

The studio dressed up this tired Caddy to look the part, but something's amiss. Instead of the flamboyant fins and shiny chrome, the '82 is decidedly pedestrian and uninteresting. Even in 1982, it was kind of a dull choice for luxury car buyers. There's a reason Murilee Martin deemed the '70s and '80s the "malaise era."

Built a couple of years before the original, Academy Award-winning Ghostbusters hit cinemas, the '82 DeVille represents one of Cadillac's lowest points bar the Cimarron.

Under its hood might be Cadilac's new-for-1982 HT 4100 V8 engine, which featured what the brand referred to as "digital" fuel injection. With 135 horsepower and 190 pound-feet of torque, the DeVille didn't win stoplight races back then.

Oddly, the V6 engine that came standard in the '82 Sedan DeVille produced the same horsepower but delivered an extra 15 torques, which made it both faster and more fuel efficient than the V8.

These were bad times for General Motors, clearly, but the gas engines paled in comparison to Cadillac's first diesel.

The company's LF9 5.7-liter diesel V8 was optional on the DeVille and we pity the unlucky buyers who checked that box. Generally credited as the engine that made "diesel" a haunted word in Detroit for 30 years, the 350-cubic-inch unit might actually be fitting for the Ghostbusters.

On the bright side, the '82 is new enough that it may have carried a box or two of Hi-C's stellar, Ghostbusters-inspired Ecto Cooler. Maybe the mortician took his kid to Kroger one time, you never know. 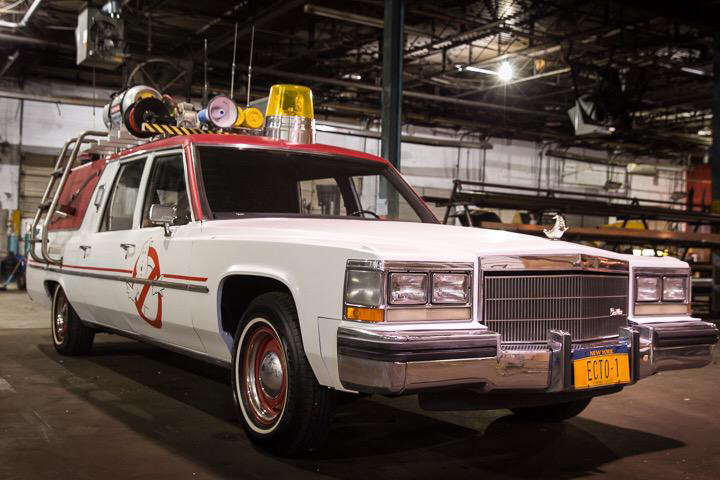 Fitting in
In the original 1984 Ghostbusters, the '59 Caddy was a forlorn and forgotten piece of machinery waiting for a new lease on life.

Character Dr. Ray Stantz picks it up and admits in the film that it needs "some suspension work and shocks ... and brakes, brake pads, linings, steering box, transmission, rear end."

A 1959 Cadillac Eldorado modified by Miller-Meteor to become a hearse or ambulance carries a hefty price tag today, influenced no doubt by the success of the original movie. But also by the fact that it is a desirable classic car in its own right; perhaps the most iconic piece of Detroit iron of the 1950s.

An '82 DeVille? Well, not so much. Rough hearses aren't that hard to find because they're generally props at haunted houses, which seems appropriate.

It's not clear where the studio behind the latest Ghostbusters picked up its hearse, but a quick perusal of some big city Craigslists revealed a few running examples for $1,500 each.

The movie's not out yet, but if it sticks to the plot of the first Ghostbusters, the idea that the ghost-hunting crew picked it up for pennies will hold true to the original.

Let's just hope that it isn't haunted by GM's diesel, which eagerly shook itself to pieces any time it encountered something way less scary than Slimer.