A techie looks better in a fitted suit than a hoodie. View All Specs
Never mind the impending bubble burst, it's technology's time and Audi couldn't be happier. The 2017 A4 is the latest attempt to prove beauty and brawn can't beat intelligence outright. And this is the company's best case in 20 years.

For two decades, the A4 has been the backbone of Audi's lineup and key in its resurgence in the post-Unintended Acceleration days. This car has managed to build up a successful following by being an alternative to the more popular BMW 3 Series and Mercedes-Benz C-Class while being nearly as good, if not actually better, than the competition. Audi chose to stake a claim in simple clothes covering technology that was more intuitive than some, being different without being difficult.

But Audi is as much a part of the establishment as its big rivals now, so it's not getting any alternative breaks anymore. It's the young tech startup that's finally a grownup – and learned to dress like one.

While Jonathon Ramsey got to drive this new A4 last fall in Italy, Audi sent me to San Diego last week to drive the US-spec model that goes on sale in a couple of weeks. And, in short, if you liked the old A4, you'll really like this one. 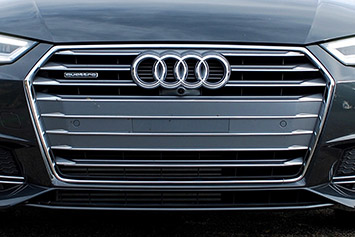 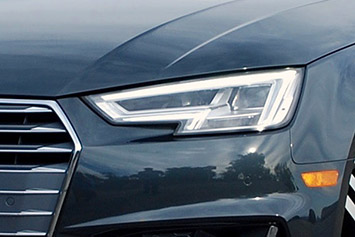 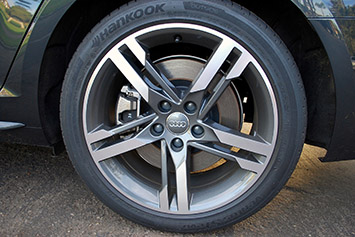 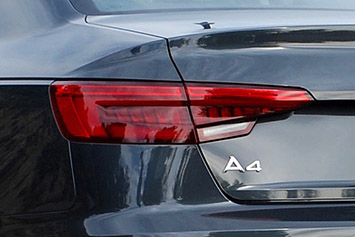 If you liked the old A4, you'll really like this one.

The fact this model is known internally at Audi as "B9" is a coincidence when you think about its exterior design. The new A4 is certainly attractive, but you'll have to be a huge Audi aficionado to differentiate this over the old car at a glance. And I dare you to find someone who's actually offended by any part of the design. Some creases lower down on the side of the new car help eliminate the bloated look of the outgoing model, without adding too much fuss. Audi still has Acura beat in the "precision" race. Other new details of note are a wider grille and slimmer headlights (xenons are standard, full LEDs optional) that make the front of the A4 look lower than before, and new sequential turn signals out back that are just fun to watch in traffic.

Changes are far more noticeable inside. The tall, somewhat slab-sided dash of the old car is gone and replaced by something with a more airy feel that we've seen in the TT and Q7. There's less of a black dash to get in the way of the expansive windshield and generous side glass, all unusual in today's automotive landscape. You're going to enjoy the fact you can see out of the A4.

This car is also the latest recipient of Audi's Virtual Cockpit, part of the $3,250 Technology Package on Premium Plus and standard on top-level Prestige models. As in the TT and Q7 that also offer it, the Virtual Cockpit is a slick presentation of every piece of data a driver could want – vehicle information, changing a radio station, zooming in and out of the sharp Google Earth imaging. Oh yeah, and how fast you're going, too. There's more good news on the tech front: Android Auto and Apple CarPlay are now included, as are two USB ports instead of the old proprietary cable. 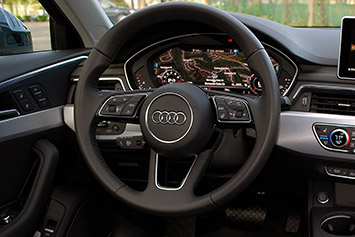 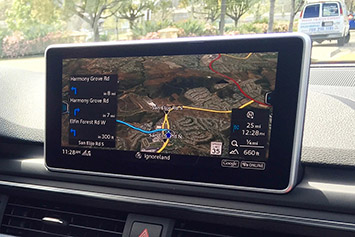 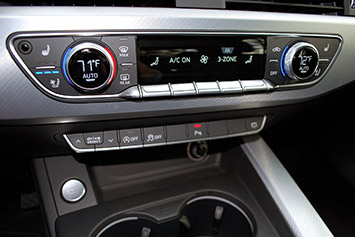 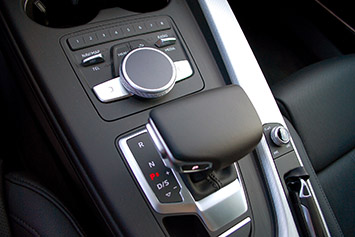 All of the safety tech that was last shown on the 2017 Q7 has made its way to this far more popular model.

The Virtual Cockpit is just one of the ways the Audi A4 remains the Mathlete among entry level luxury sedans. All of the safety tech that was last shown on the 2017 Q7 has made its way to this far more popular model, such as the Audi Turn Assist that slams on the brakes if sensors think you're going to turn into oncoming traffic. The adaptive cruise control that's part of the Driver Assistance Package can slow for impending corners, as well as be tied to sign recognition so a sudden drop in speed limits doesn't catch you off guard. It's the best system I've used.

But what if you want to drive your Audi?

The A4 is still powered by a 2.0-liter turbocharged inline-four, with standard front-wheel drive or optional Quattro all-wheel drive. But the new 2.0T spurts out about 40 more horses than before, for a total of 252 horsepower and 273 pound-feet of torque. The sprint from 0-60 slides in under the six-second mark with all-wheel drive, according to Audi, which is awfully close to what a V8-powered S4 did just a decade ago. The four feels more robust than blistering, at least from a stop, thanks to a fat torque band that starts from 1,600 rpm and goes to 4,000. It's more than capable of getting around slow-moving Leafs and Prii on the highway, if you're curious. 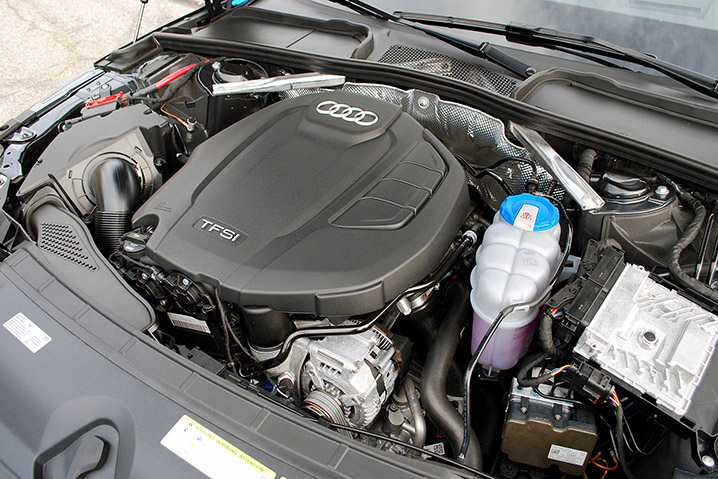 While it suffers from lazy first-to-second shifts at city speeds, the S-tronic has the sort of crisp, quick shifts that the best dual-clutches are known for.

My drive time was confined to Quattro models, which is what the vast majority of buyers pick, according to Audi. For now, the A4 gets one transmission, the seven-speed dual-clutch automatic (S-tronic, in Audispeak) that replaces the CVT previously offered on front-drive cars. A manual arrives sometime in 2017, available only with Quattro. It's hard to see how that manual would really improve matters, though. While it suffers from lazy first-to-second shifts at city speeds, the S-tronic has the sort of crisp, quick shifts that the best dual-clutches are known for. The trouble comes from a throttle that requires a firmer press from your right foot than initially thought, no matter which of the Audi Drive Select modes you're in. Smooth starts from a stoplight get easier with practice.

The EPA hasn't given official fuel economy figures yet, but Audi officials hint at them being competitive with the BMW and Mercedes turbo fours.

Audi says the A4 is pitched at the sportier side of the luxury segment, gunning for more of an enthusiast's ear than someone who wants purely a comfortable chair to go to and from work. And the new car is definitely competent in tight corners, feeling more planted than heavy as the all-wheel-drive system shuffles power around. All models come with the Audi Drive Select controller for Normal, Sport, etc. modes that alter steering and throttle inputs. Yet adaptive dampers for the suspension are an option. And if I had to split hairs, the adaptive suspension might be a little sharper when it's in the most aggressive setting, even if road imperfections were heard and felt with the common 18-inch wheels. In all of the cars, the comfort setting is most felt in the steering, which goes from being artificial with good weight to having little feel or weight. Save your $1,000 on the dampers and leave the Drive Select in automatic mode. 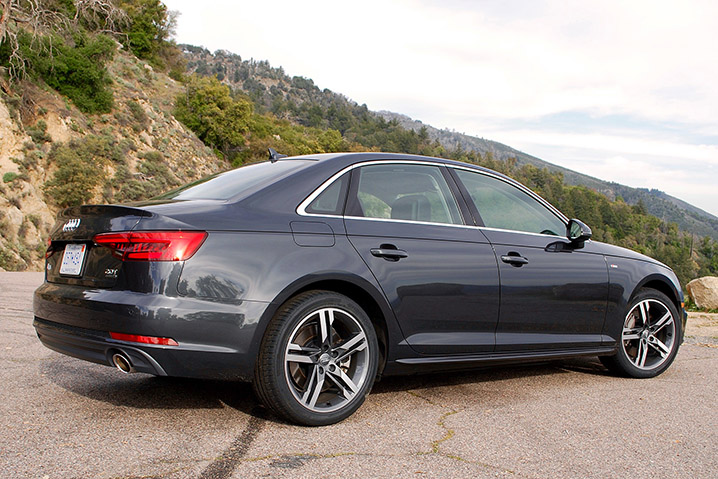 The Audi rivals a C-Class or Volvo S60 for its ability to cover hundreds of miles in a single stretch.

With that, the A4 is more comfortable than it is engaging. You won't get into trouble in the corners (at least not in a Quattro version), but I'll bet a rear-drive 3 Series or a Cadillac ATS will give you more excitement. On the other hand, the Audi rivals a C-Class or Volvo S60 for its ability to cover hundreds of miles in a single stretch.

I drove two A4s, a Prestige trim with pretty much every option, priced at $54,000, and a much more common A4 Quattro Premium Plus with the Technology Package (navigation, wifi hotspot, Virtual Cockpit) that stickers for just below $48,000 – what Audi considers to be its big seller of the A4 line – and at least three grand less than a similarly equipped BMW 328i or Mercedes C300. The A4 comes off as good value and sensibly equipped, without compromising on much. There's little that feels unfinished about the Audi, in terms of looks, technology and driving dynamics, which pretty much seals its case for me. That, and you can have it in a new dark green color, which I'm a sucker for.

In the class of 2016 German luxury sedans, the A4 still competes against the jock 3 Series and the high-society kid C-Class, coming off as the Stanford-bound valedictorian that happens to clean up really well. But you might want to stay friends when it comes time for its IPO, just saying. 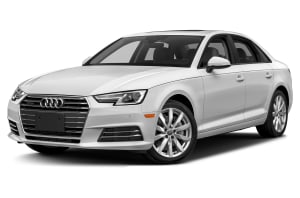