Some self-driving cars see green light, others get a yield

Pete Bigelow
Manufacturers that choose to build self-driving cars that hew closely to the design of traditional vehicles will enjoy a ride in the fast lane toward their development while manufacturers that push for more unconventional designs face roadblocks.

Those are the conclusions of a government report released Friday, which found that autonomous developers who experimented with new cabin configurations or removed human controls like steering wheels and brake pedals would be "constrained" by the current federal motor vehicle safety standards.

The report, produced by the Transportation Department's Volpe Center, comes at a time when federal officials are in the midst of a six-month push to examine how existing rules and regulations might need to adapt to accommodate the arrival of autonomobiles on American roads. It examined how current motor-vehicle standards might apply to different levels of autonomous vehicles, but did not endorse one approach versus another.

" It can mean different things if we really like the technology or if we're really afraid of the technology. We're about to see that play out." – Bryant Walker Smith


Nonetheless, the 138-page report underscored the uphill challenge a company like Google might face in launching a self-driving car that does not contain human controls. The tech giant, perhaps the leader among all companies vying to develop autonomous technology, has argued it is safer to entirely remove human drivers.

"Many standards, as currently written, are based on assumptions of conventional vehicle designs and thus pose challenges for certain design concepts," the report said," particularly for 'driverless' concepts where human occupants have no way of driving the vehicle."

Friday's report was the latest indication that approach may be a longer slog. Six weeks ago, the National Highway Traffic Safety Administration urged Google to reconsider its position that autonomous cars are better off without the possibility of human intervention. 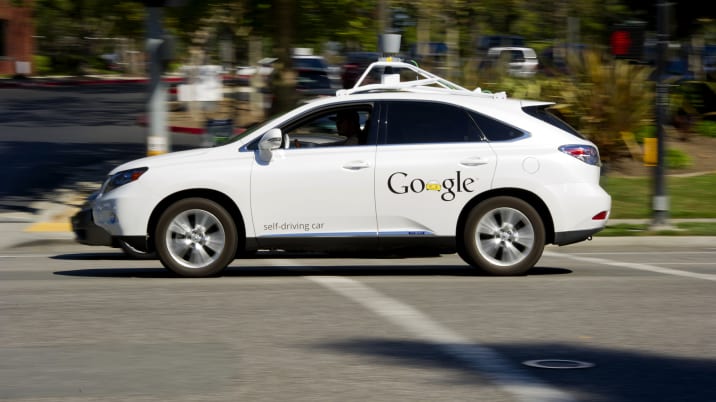 Officials released the report as part of an overall update on the Department of Transportation's efforts to accelerate the arrival of autonomous cars and, more broadly, as President Obama touted the promises of new technologies during an appearance Friday at South By Southwest in Austin, Texas. In January, Secretary Anthony Foxx said the government intended to fast-track the development of rules and policies regarding autonomous cars and that he was "bullish" on their potential.

The department said Friday it would hold public hearings next month – one in Washington D.C. on April 8 and another at a time and location to be determined in California – for developing guidance on the safe operation of autonomous vehicles. Foxx said federal officials wanted public input in determining how automated and connected vehicles should behave on public roads. An AAA survey released last week revealed that 3 in 4 motorists would be "afraid" to ride in a self-driving car.

A Google spokesperson did not comment specifically on the Volpe report Friday, but referred to previous statements that touted the benefits of its self-driving software. It would "provide better braking performance than a human driver would provide," the company said. "Specifically, there will be no potential for driver distraction, no potential for the brakes to be applied with too much or too little force, no lag time between the time the SDS identifies a need to apply the brakes and their application and no potential for pedal misapplication."


Calling the Volpe report "a great first look at current standards as they exist now," at the current state of affairs, Foxx said it confirmed that the government had more work to do to ensure the safety of new innovations. What might that work look like? Currently, the federal motor vehicle safety standards generally assume the presence of a human driver.

Last month, NHTSA issued an interpretation of some of those rules that indicated, for the purposes of meeting those standards, "driver" could mean not just who – but what – was driving the car. In some ways, it was a watershed moment for artificial intelligence. In others, it only complicated matters. Even if the federal government, for example, says self-driving systems can be considered the driver of a car, the government regulates vehicles and vehicle safety. States, on the other hand, issue laws regarding drivers and driver licensing. One could potentially clash with the other.

"The devil is in the details, and once you go deeper, you discover these weird legal details you never would have guessed," says Bryant Walker Smith, an assistant professor of law at the University of South Carolina, who focuses on the development of laws and regulations concerning self-driving cars. "The broader social context will shape how those are interpreted. It can mean different things if we really like the technology or if we're really afraid of the technology. We're about to see that play out."