Refuse a breath test during DUI stop? It's now OK in Kansas

State court strikes down law that criminalized refusal, but US Supreme Court will likely decide issue.

Pete Bigelow
A Kansas law that allowed authorities to charge motorists who refused breath or blood tests during drunk-driving investigations with additional crimes has been found unconstitutional.

The state's Supreme Court ruled Friday that the law, which says anyone who operates a motor vehicle in the state has given implied consent to such testing, violates drivers' Fourth Amendment right to unreasonable searches and seizures.

The ruling came in a series of four cases involving similar issues, in which the Kansas Supreme Court tried to balance individual privacy rights with what one justice called the state's "compelling" interest in ridding roadways of drunk drivers.

"We think law enforcement members need to have all the tools at their disposal to keep our roads safe from drunken drivers." – Christopher Mann


An individual has the right to withdraw consent, the court found, and punishing them for exercising that right violates the due-process clause of the Fourteenth Amendment. The decision applies only to cases where a warrant has not been obtained; Kansas authorities retain the right to obtain a warrant to collect breath or blood samples.

Though this particular decision only applies to Kansas, the outcome could have broader implications for motorists across America. Courts in South Dakota and Minnesota have upheld laws similar to the one that Kansas just struck down, and the US Supreme Court indicated in December it would soon hear a group of cases that will decide whether laws that criminalize refusal are constitutional.

The Kansas decision could potentially provide a framework for that U.S. Supreme Court's review. The state court not only rejected the law, but in a separate ruling, said efforts to ensure compliance amounted to coercion.

"A driving-under-the-influence suspect's consent to breath-alcohol testing is not freely and voluntarily given if such consent was given following a written and oral advisory informing the suspect that he or she might 'be charged with a separate crime of refusing to submit to a test to determine the presence of alcohol or drugs, which carries penalties equal to or greater than those for the crime of driving under the influence," Judge Marla J. Luckert wrote for the majority. "The advisory is inaccurate and cannot serve as the basis for a voluntary consent." 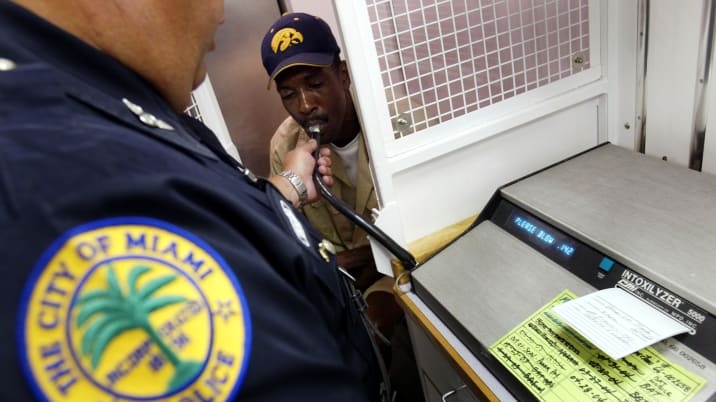 The 6-1 decision represented a blow for authorities and safety advocates trying to protect motorists from drunk drivers. Traffic fatalities are rising at their fastest pace in decades, and impaired drivers are involved in roughly a third all fatal accidents, according to the latest federal statistics.

A member of the national board of directors for Mothers Against Drunk Driving told the Kansas City Star the decision amounted to a "loophole" for drunk drivers. "We support penalties for refusing to take chemical tests," Christopher Mann told the newspaper. "We think law enforcement members need to have all the tools at their disposal to keep our roads safe from drunken drivers."

Beyond whatever penalties that would be associated with a drunk-driving conviction, the Kansas law criminalizing refusal to test carried a penalty of up to six months in jail, a fine of up to $1,000 and a license-suspension for as long as on year for first-time offenders.