This is the Genesis I've been waiting for

Jeremy Penfold
In November Hyundai finally confirmed everyone's years long suspicion and announced the creation of its own global luxury brand, naming it the obvious choice, Genesis. The press release revealed a few important details, the biggest probably being that six models will be under the new brand by 2020. We can already account for at least two of these models as newly branded Equus and Genesis sedan models (possibly the coupe as a third) but we are left wondering for the rest. There is a strong argument for the Azera, as it was recently cut from Hyundai's line-up and the obvious choice of bringing in some ever important crossover models, especially while remembering the Veracruz experiment. The newly minted luxury name adds another player to an ever crowded high-end market, but a growing one, where there is room for deviation from the pack. Can Hyundai fill that niche and crack a historically expensive market to enter? I think so.

Part of the Genesis plan is in crafting a proper luxury buying environment, what it calls its "hassle-free customer experience." It is unclear if this will mean fixed market pricing and no-negotiating terms but we can certainly draw that conclusion. As much as consumers claim they don't want to hassle, past attempts at fixed pricing have had mixed results. Though, with the emergence of Tesla as a real luxury contender using that kind of pricing model, maybe it's something thats time has finally come. When Hyundai introduced the Equus to the American market they placed an emphasis on the customer experience, requesting that each Equus qualified Hyundai dealership assign an "Equus Champion" to specifically handle all Equus inquires and follow a meticulously designed sales process. This salesperson had to take extra online training and pass multiple choice tests to maintain their position to sell Equus. Hyundai knows that customers buying a $60,000 vehicle expect a different experience than those buying a $30,000 one. The former group is more in tune to the concierge experience, a complete envelopment of the buyers attention and needs. Hyundai achieved this with personal on call attention from the Equus Champion, who went so far as picking up the customers vehicle well after purchase, dropping off a Genesis sedan loaner, and taking care of the entire vehicle service process (included free of charge of course) without barely any customer involvement. Today's idea of luxury is just as much about the feeling of being special and having personalized service as it is about the actual consumer product. If Hyundai carries over these high level services to the Genesis brand, they may be able to take the market by surprise by surpassing luxury customer's prior experiences. 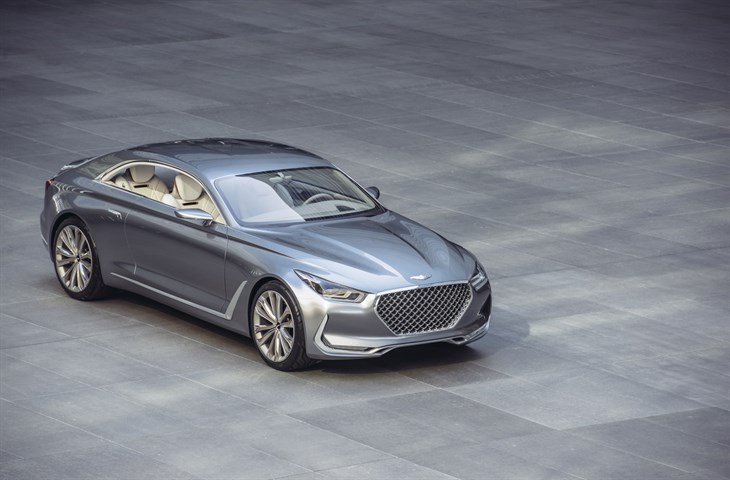 Starting a whole new luxury brand also means looking ahead to the future of the automotive market and getting in front of that curve to stay relevant. What does that mean today? Hyundai says it's delivering an "all-but autonomous driving experience" - in anticipation of the full autonomous experience, presumably. Genesis will benefit from the expected future autonomous market if they are born with the technologies that will make it possible. Cameras, sensors, radar, telecommunications networks - they will all be standard equipment on the new vehicles. Per Hyundai, the Korean home market will see them first. "With technological innovation at its core and in anticipation of fully-autonomous cars, G90 features Genesis Smart Sense, which brings together advanced systems including Genesis' advanced 'Highway Driving Assistance' (Korean market only), Advanced Smart Cruise Control and Lane Keeping Assistance System."

The second largest car buying market is now the millennials and as they climb corporate ladders and build successful businesses they will certainly come to dominate the luxury market. Millennials are different from previous cohorts of people as they grew up during the advent of the information age, just barely outdating the internet as we know it on the oldest end of the spectrum - the youngest not ever knowing a world without Amazon. The biggest challenge that manufacturers will have with them is that they are not easy to impress. Meaning they have an expectation of technology that continuously gets better and does wondrous things previously only dreamed up in science fiction novels. If your not moving forward, you are in fact falling behind. This sense of technology entitlement also allows some of the flashy gadgets to finally disappear into the background and do their jobs without making a fuss about it. If it's expected to be there, then we don't need to see it. The Genesis Vision G Coupe Concept is a window into the future of the Genesis brand, showing off the expected design language of its upcoming models. They hit a home run with this concept and there is certainly a lot to look forward too if the design element's carry over to the consumer end product. Korean brands have always taken flak for "borrowing" elements of successful brands for their own designs and I'm sure there will be comparisons of this new interior with that of Volvo's wonderful cabins. It is sleek, integrated, bright, open feeling and strikes a perfect balance between modern and classic. It incorporates all the technology we have discussed without really showing any of it off, it fades into the background of a gorgeously designed environment. I think there is a line where the borrowing stops and the new form is even better than the inspiration and this may be it. I would argue it's better than anything demonstrated by Sweden or Germany. 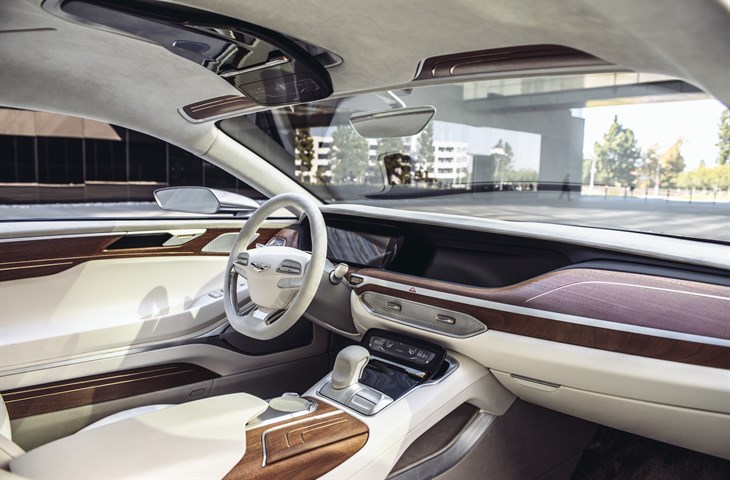 Looking through the concept photo's we can see the heavy uses of natural materials; wood, leather, metal - and the organic clean lines that make the dashboard, overhead console and rearview mirror all have the illusion of floating. The design language can be expressed in words as airy yet substantial. The Vision G hits all the right notes on the exterior as well, fulfilling the oft-sought after balance of modern and timeless. Modern fashion trends are moving towards what is dubbed "heritage" elements, for example the sudden rise in popularity of the LL Bean boot after over a century in production. Authentic timeless early twentieth century design is fashionable and Genesis wants to do the same for cars. The less dramatic production G90 sedan is an early step towards this language and Hyundai explains it like this, "G90 also showcases the Genesis brand's hallmark design style 'Athletic Elegance', interpreted by the newly-formed Prestige Design Division to bring graceful and profound elegance to G90's significant proportions." Both vehicles conjure up images of old Mercedes cars and classic Bentley proportions, old world luxury ideals sculpted into modern masterpieces that balance on the knife edge of old and new. The Vision is described more boldly, "The design team used 'chivalry' as a key inspiration to ensure Vision G grabbed ones attention and commanded respect, but without finding it excessive or exuberant." Again, you can say that the Korean's have borrowed too much from other designers, but as with the interiors I would argue they have perfected the designs in a powerfully artistic way. 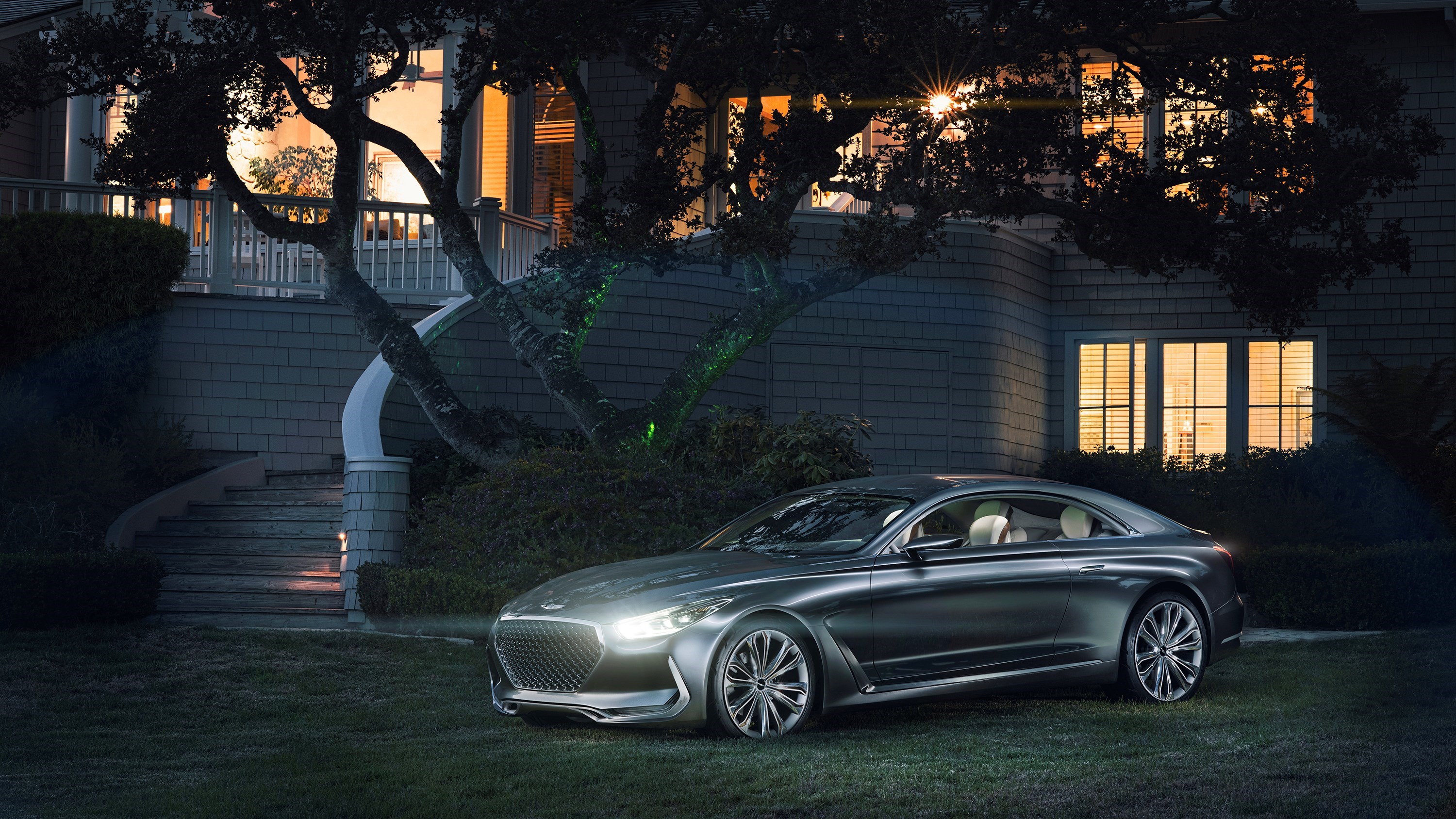 The idea of luxury in the auto market has always been a tug of war between performance and comfort, with one team and the other always screaming about sacrificed made on new German sedans one way or the other. Modern cars have potentially reached a point of peak performance, in that meaning that greater advances require ever more investment with very little return. Even the most basic luxury vehicles tend to be as quick and well handling as the most advanced even a couple decades ago. If performance has become a given, then the idea of luxury focuses more on the comfort spectrum, and Hyundai has gone to great lengths to deliver that in Genesis. Not only do they claim the G90 has the quietest ride in it's already impressive class, "boasting best-in-class ratings for in-cabin quietness," but they are also bringing out class leading ergonomic measures that are supposed to make sitting even more comfortable. "The first-class theme extends to occupant comfort, with the G90 offering the world's first clinically-validated Smart Posture Caring (SPC) System, which automatically adjusts the seat, steering-wheel, outside mirror and head-up display to the optimal position for the driver's body (Korean market only)." And so passengers don't feel left out, "G90's VIP ergo passenger seats feature multiple ranges of electronically-controlled adjustment and are approved by German campaign for healthier backs." Vehicle ergonomics are already lauded as some of the best designed places to sit, so has Hyundai taken it to a whole new level with these technologies? Unfortunately the American market will have to wait to find out. 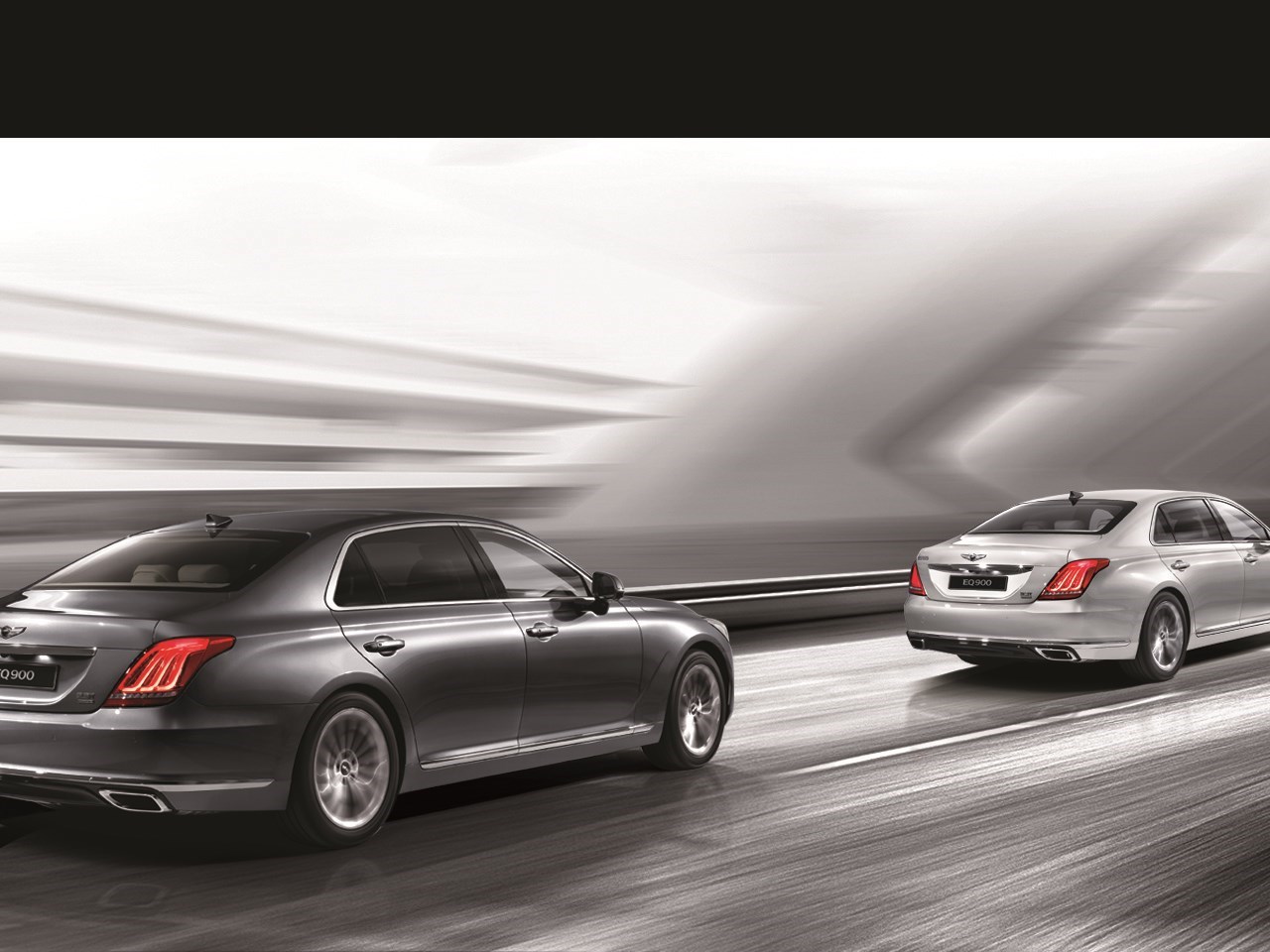 We know that the soon available G90 is the next generation Equus without the H logo on the trunk, so we have an idea of what we'll be getting. We can also expect that Hyundai will reward Hyundai dealerships who already invested heavily in Equus showrooms with exclusive opportunities for building stand alone dealerships, as is the industry norm. It can be assumed that the Genesis sedan will eventually slide it's way over to it's namesake brand as it clearly fits below the Equus. The other four vehicles being planned to hit not yet built dealer lots by 2020 are speculation. Autoblog revealed in January that Hyundai would drop the Azera in the North American market as part of it's new battle plan; this could mean a move to the Genesis nameplate but we can't be sure. The Genesis Coupe is more difficult to categorize as it has always straddled the line between sports car and luxury coupe. My guess is that it moves in the next generation to Genesis as a true luxury sports couple to compete with the Lexus RC and the Infiniti G60 couple Hyundai has historically compared it to. The rest of the lineup is almost certainly reserved for crossovers as they make up a larger percentage of the market. With such a short launch window, I think we're likely to see redesigned versions of the three Hyundai models; Tucson, Santa Fe Sport and Santa Fe. Those vehicles are already class leading respectively and it wouldn't take much effort to make them place fillers for the Genesis brand until dedicated designs can be developed.

Hyundai knows they have challenges ahead of the them with the Genesis luxury brand. They need to go beyond the livery and humble-luxury markets they have carved out with the Equus model. Luckily, that background has prepared them for a market well primed for the kind of experience they intend to deliver. It's no secret that the road to any successful luxury brand is successful marketing, building the perception of luxury brings people into the showroom. Hyundai has an uphill battle in this department as they fight sure footed established brands that have learned to take new contenders seriously after the lessons of Lexus, Acura and Infiniti. I believe Genesis has the product, the experience and the right ideas to be a major player in the luxury market and disrupt the plans of the establishment. The question is whether enough other people share my enthusiasm and check out Genesis showrooms while shopping for their next luxury car. Let me know in the comments below if you would give Genesis a fair chance.
X