A tribute to Koenigsegg

A brief look at the history of the Swedish company.

Thanos Pappas
We all know the Swedish company Koenigsegg for its limited production hypercars with outstanding performance figures and exotic design. However the company wasn't always a big player among the supercar manufacturers as its history is actually short, beginning in 1994. Its founder, Christian von Koenigsegg, had a specific goal when he created this company – he wanted to build an upper class supercar and this is what he has achieved... 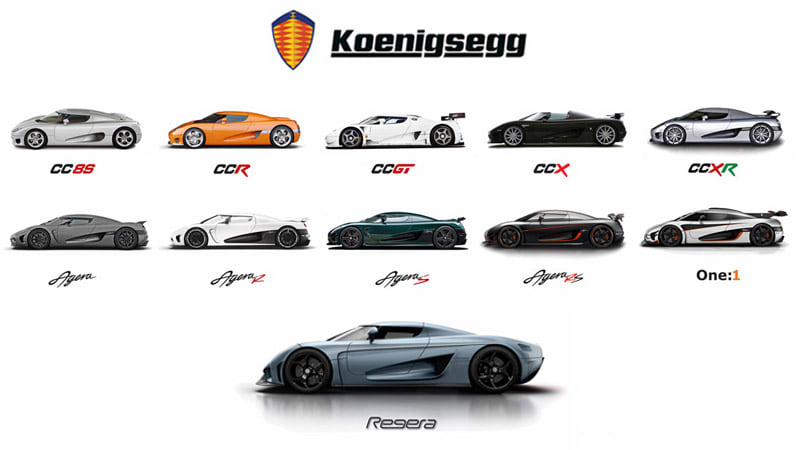 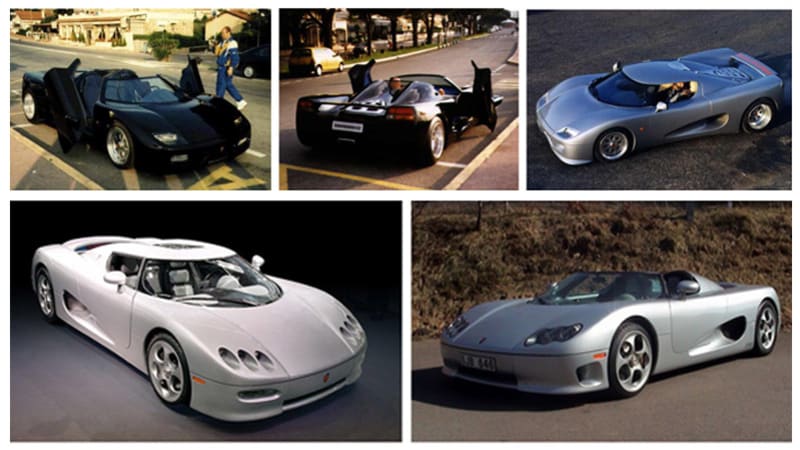 It all started with these prototypes (1996–2002) built for testing purposes. After long hours of testing, the new platform that would underpin the upcoming supercar CC8S was ready for production in 2002. 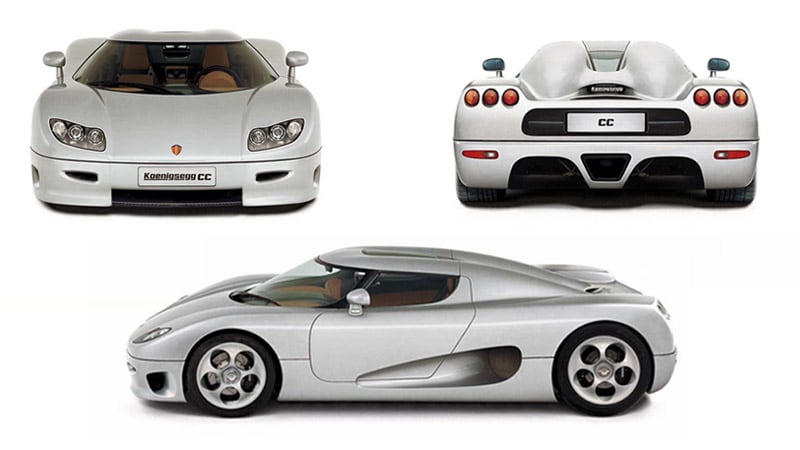 The CC8S was the first production car from Koenigsegg in 2002 and as you can see it introduced an original design language which kept evolving until the recent One:1 of 2015

The Koenigsegg CC8S was presented in 2002 as a targa supercar with a mid-engine/rear-wheel-drive layout. A Ford-sourced 4.7-liter V8 engine produced 646 hp and 553 lb-ft of torque while the chassis, suspension, and brakes were custom-designed by Koenigsegg. Maybe those numbers don't seem impressive to you today but in i's time, the CC8S was one of the most powerful and fastest cars in the world – the 0–60 mph acceleration took place in 3.2 seconds and its top speed was 242 mph.

The car won several awards for its design and performance, being the first vehicle to incorporate dihedral syncro helic door mechanism which in the process became the company's trademark. A total of 6 units left the factory and found their way to their lucky owners. 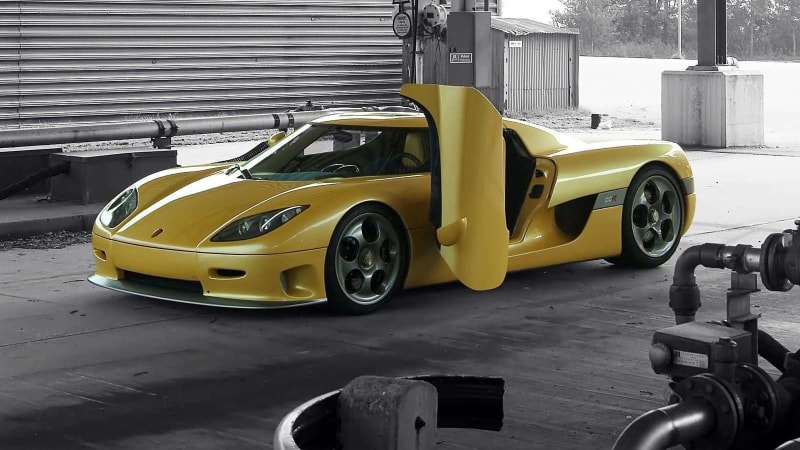 The CCR (2004) with it's weird but cool door opening mechanism that is a trademark for Koenigsegg.

After significant press coverage and positive reactions from the public, the successor of CC8S was presented in 2004 at the Geneva Motor Show. The new CCR was actually an overall improved CC8S with upgraded suspension, aerodynamics, and exterior design as well as with more power from the same engine (806 hp and 680 lb-ft) thanks to the twin Rotrex superchargers, resulting in improved performance figures.

The CCR sold 14 copies, and in 2005 it broke the speed record set by a McLaren F1 at the Italian track Nardo with a speed of 241 mph (shortly after, the monstrous Bugatti Veyron would set a new record with 253 mph). 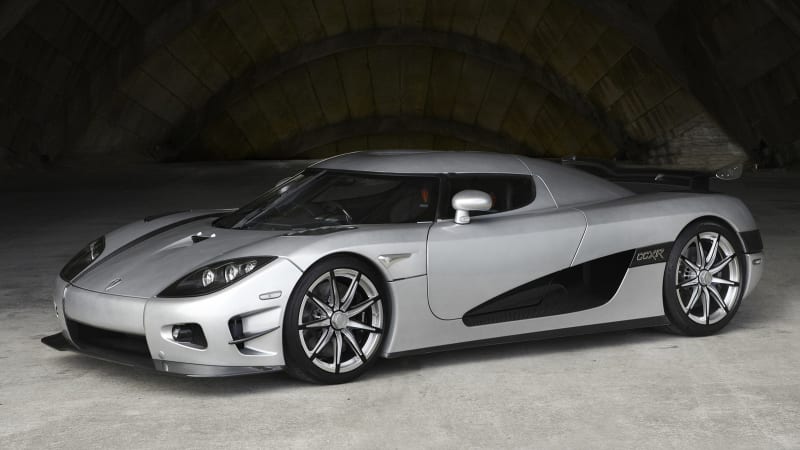 The special edition CCXR Trevita (2010) - only two of these have been sold to customers, one of which belongs to the famous boxer Floyd Mayweather.

In 2006, celebrating the 10th anniversary of the company, came the updated CCX model, which for the first time complied with the US safety and emission standards, entering in a very important market for supercars at that time. The CCX had a new aluminum 5.0-liter engine originally made by Koenigsegg with 795 hp and 680 lb-ft of torque. 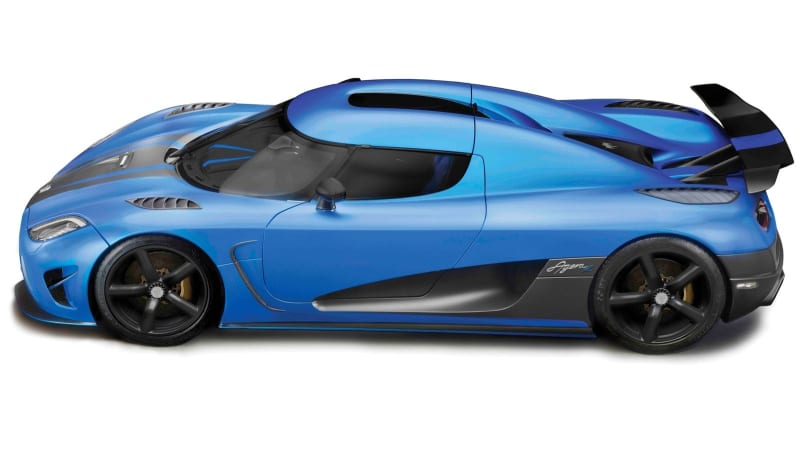 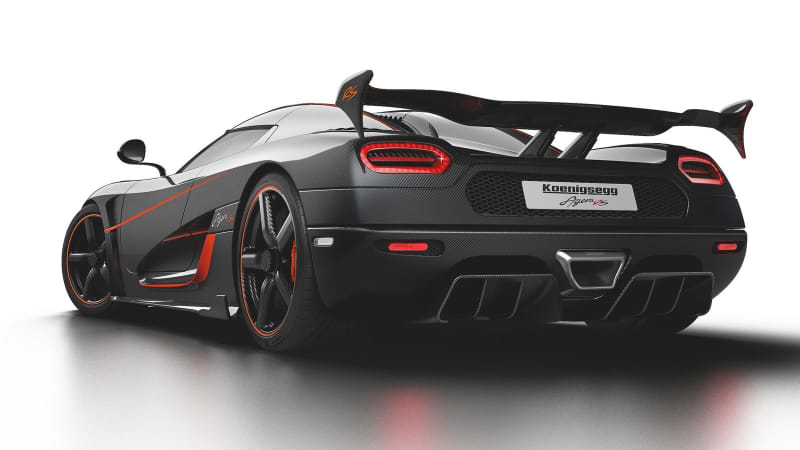 An Agera RS (2015) with unpainted carbon fiber body and orange details. This was the last and the most powerful model baring the Agera nameplate and all of it's 25 units were recently sold out.

The next major update for Koenigsegg came in 2010 with the launch of the Agera nameplate. The model had a revised and modern design with more curves and was fitted with the upgraded twin turbo V8 5.0 liter engine which scored an output of 927 hp and 811 lb-ft of torque. Its chassis was made of carbon fiber and aluminum while a combination of carbon fiber and kevlar was used for the body panels together with lightweight reinforcements. 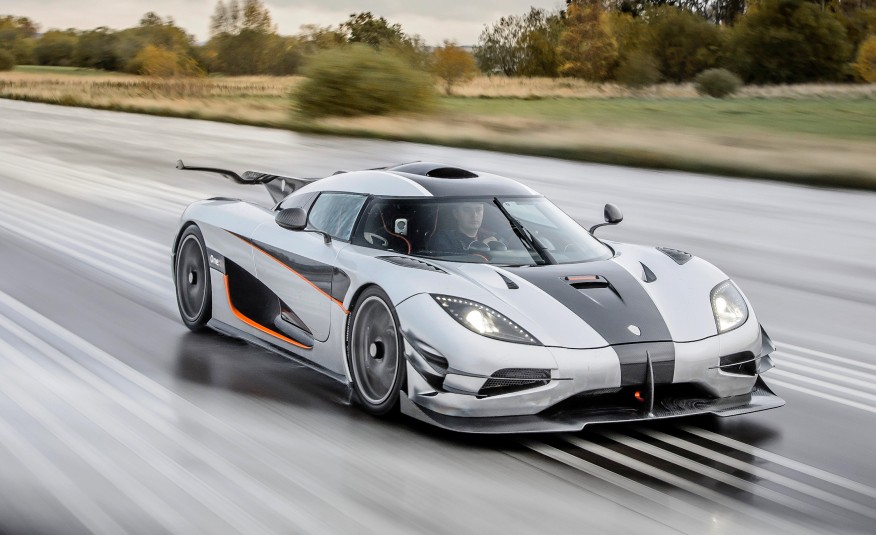 The first mega-car, with a weight to power ratio of 1, the extra-ordinary Koenigesgg One:1 (2014)


The last model based on the Agera platform but with major mechanical and visual updates was the One: 1, presented in the 2014 Geneva Motor Show. As the name implies, it had a impressive power to weight ratio equal to 1. The 5.0-liter engine's output was increased in 1360 PS, with 811 lb-ft of torque, while the total weight of the car was reduced to 3,000 lbs (1360 kg).

Regarding performance, the 0–248 mph acceleration required only 20 seconds while the vehicle could reach a whooping top speed of 273 mph. The One: 1 also broke another astonishing record after making the 0–186–0mph in 17.95 seconds! Because of all that, the company calls it the first in a new class of mega-cars, sitting higher than supercars and hypercars. Only six copies were sold to customers, with a price of more than $2.5 million. The original record-breaking prototype which was kept by Koenigsegg for testing purposes has now a price tag of $6 million... 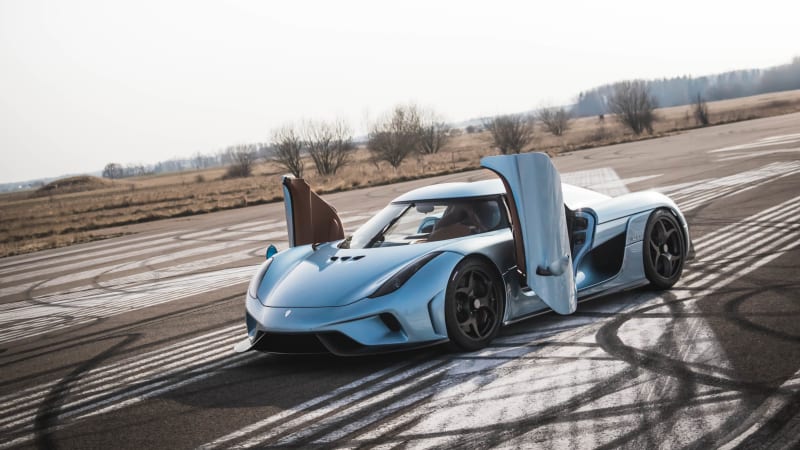 Beautiful and sufficiently aggressive with a drastically evolved design language, the all new Koenigsegg Regera looks astonishing in this Ice Blue Color, ready to take off on this airstrip.


As for the end of our tribute we have the most recent "beast" from Koenigsegg – the hybrid Regera which was presented in the 2015 Geneva Motor Show. The new model embodies the most radical change design-wise since the creation of the company. The striking new front-end and the long tail departs from the Agera series and opens up a new chapter in Koenigsegg's design philosophy.

The upcoming mega-car is equipped with three electric motors that work together with a supercharged V8 engine producing a total of 1822hp! Regera does not need a gearbox thanks to the revolutionary Direct Drive System (KDD) invented by Christian von Koenigsegg himself. It also features a new robotized door system called 'Autoskin' which uses hydraulics to open every door on the vehicle, including the front luggage door and the rear engine door.

As we know, the Regera will be more luxurious and easier to drive than it's predecessors while it also aims to become the most powerful production car in the world with the most blistering acceleration. The company plans on producing 80 units with a price of US $1.9 million. 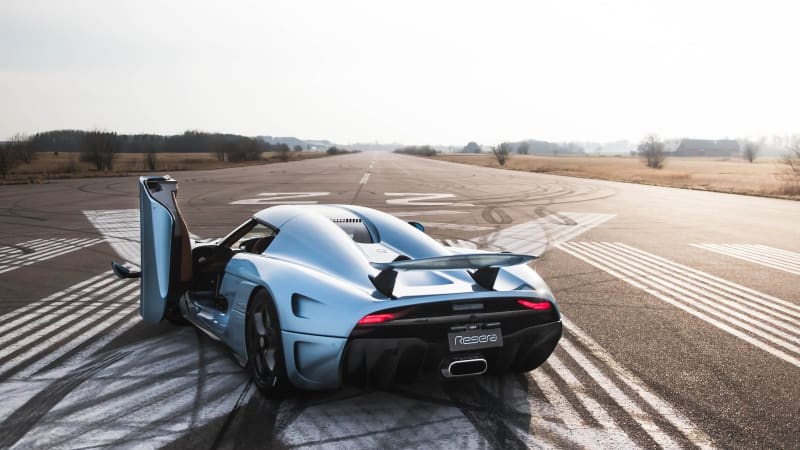 The long tail of the stylish Regera, combined with a large diffuser, active aerodynamics and it's sleek design, results in high levels of downforce which is necessary for keeping this beast on the road.

Nobody knows what will happen in the future, but it is certain that Koenigsegg will keep impressing us with it's creations, as the demand for exotic hypercars (or mega-cars) is constantly growing in the markets of Middle East and China. You can also make a safe bet that those engine outputs will keep rising for years to come, especially with the introduction of the new camless engine called "FreeValve" that Koenigsegg is working on right now...