View All Specs
Convertibles get a bad rap when it comes to performance cars. Once, a lack of a roof meant extra performance. Now it means added weight and loss of structural rigidity. This stigma even applies to supercars, maybe more so. In the case of Lamborghini, the Huracán LP 610-4 Spyder is the "lifestyle" version. Which is silly, but doesn't diminish the appeal.

Essentially, the Spyder is a Huracán with a fabric roof. Same 602-horsepower V10 inches behind the cabin, same hybrid aluminum-and-carbon-fiber construction, and same all-wheel-drive (though updated across the line for 2016). The performance compromise is a mere one mile per hour drop in top speed, and two-tenths of a second slower claimed 0-62 mph time of 3.4 seconds. (We suspect this is generously slow, to protect the egos of coupe owners). All told, the Spyder adds about 220 pounds in curb weight versus the coupe (Italian "dry" weight numbers are notoriously optimistic, so take the 3,650-pound Spyder claim with a grain of salt). 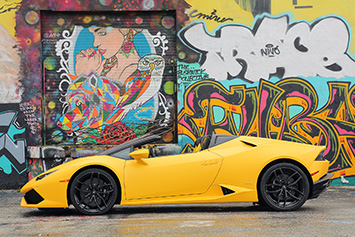 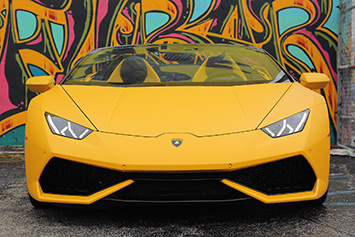 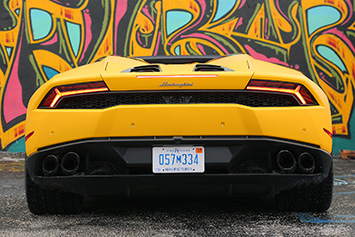 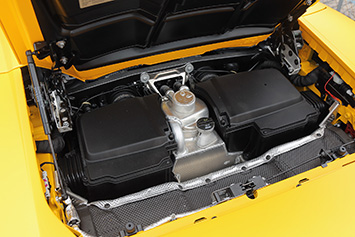 The aerodynamic management on the Spyder is so good that the 201-mph top speed is valid with both the top up and retracted.

In detail, the conversion in making the Huracán convertible is extensive. The roof itself is three layers of fabric, with a middle rubberized ply to cut down on interior noise. The design brief was to maintain the Huracán's hexagons-gone-wild theme with the top up and down. Spend 17 seconds waiting for the fully automatic top to lower, and the shape retains the coupe's motif. Part of the top's electronic ballet is a pair of flaps that extend out to preserve the shape of the B-pillar.

Those flaps also feature narrow slits that smooth the wind along the side of the car, reducing turbulence near the driver's and passenger's ears. Additional side deflectors keep more wind away from your head. And with the top down the rear window's maximum height is restricted to prevent it from catching air. The aerodynamic management on the Spyder is so good that the 201-mph top speed is valid with both the top up and retracted. Suck on that, coupe aficionados.

The Huracán's performance is so ridiculous that few can explore the margin between the two bodystyles. In any case, we didn't get much chance to stretch the Huracán's legs on our press drive in Miami, due a torrential downpour and the fact that South Florida is a terrible place for driving. Maybe that's where the "lifestyle" portion comes in, because Miami is a fantastic town for flaunting wealth. 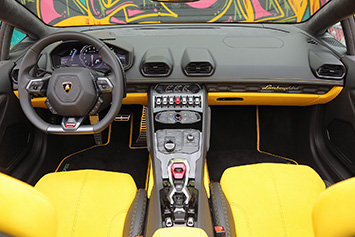 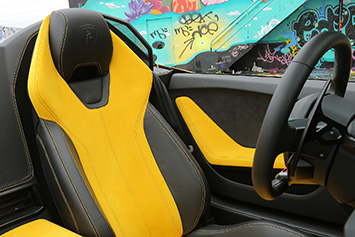 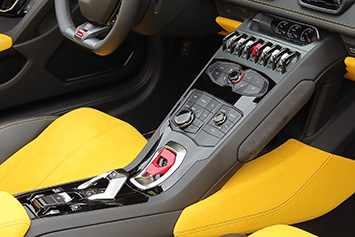 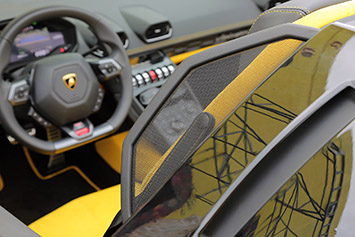 The V10 lights up with a roar, an aural reminder that turbocharged engines aren't all that.

As we mentioned in Autoblog's previous drives of the Huracán (and in your author's personal experience prior to joining the team), this car is does everything well. It has lightning-quick reflexes, a scalpel of a car on the track but still easy to drive. If modern supercars are approachable, the Huracán falls on the even-more-approachable end of the spectrum. Slow down to the speed limited on our test drive, and the Huracán still entertains. The V10 lights up with a roar, an aural reminder that turbocharged engines aren't all that. We even started driving in Corsa mode, stuck in traffic, just to hear the exhaust.

Every part of sitting in the Huracán makes you excited about, well, being in a Lamborghini, from the aforementioned hexagon theme (they're everywhere) to the line of rocker switches on the center console. Lamborghini's done a decent job of incorporating the Audi roots of the infotainment system in a bespoke way, but of course we have some minor complaints. The center digital readout of oil pressure, oil temperature, and battery voltage doubles as the climate control display but doesn't show radio tuning - which would be nice. All other information shows up in the instrument cluster in lovely high-resolution color. When using the navigation system, the list of turns is confined to a small enough area on the screen that squinting is required. 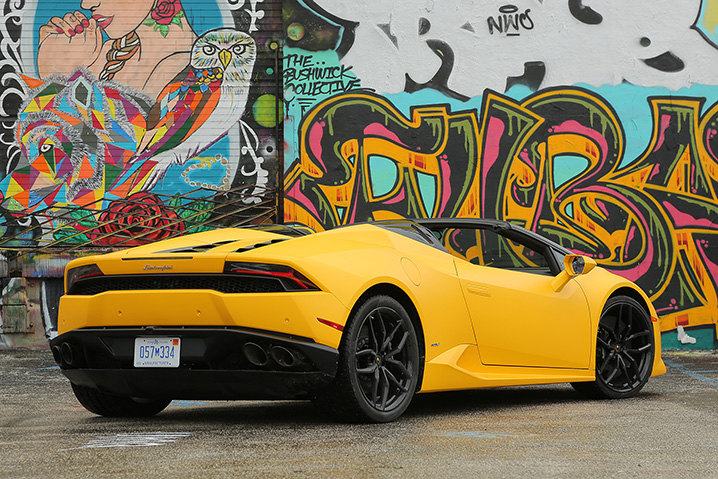 It's a little slower, and the center of gravity is higher, but the difference between coupe and convertible is hard to discern.

Really, though, the Huracán Spyder isn't made for the drudgery of turn-by-turn directions, although the seats are comfortable and so is the cabin. You simply need to pack light and make sure your companion is of average height – the front trunk barely holds two backpacks and taller folk will encounter head or legroom issues within the cabin. More complaints? Sure: The carbon ceramic brakes are noisy in stop-and-go-traffic, and the start-stop system cannot cope with fast getaways like a left turn onto a busy street. All 2016 models add a five-cylinder engine mode that is nearly seamless. This attempt at eking out a few miles per gallon works by rotating which cylinders fire instead of shutting down an entire bank of the engine.

Does any of that matter to the potential Huracán buyer? We suspect not, though we lack perspective of a lifestyle that can afford a sports car with a base price of $267,545. It's a little slower, and the center of gravity is higher, but the difference between coupe and convertible is hard to discern. If you have the means, pick which one looks better and go with that. Either way people will still follow you around, cell phone cameras deployed. Maybe that's what Lamborghini means with that "lifestyle" word. 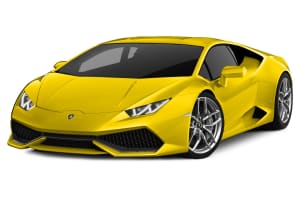