Pete Bigelow
President Obama has proposed a $10 per barrel oil tax that would provide funds for new investment in green transportation and reduce carbon emissions that contribute to climate change.

The new proposal would also pay for modernizations in the country's transportation infrastructure. Not only would it ensure the long-term solvency of the nation's Highway Trust Fund, it would pay for investments in autonomous cars, high-speed rail and new public-transit options, the White House said.

Announced Thursday, the plan is part of the President's 2017 budget proposal that's expected to be submitted to Congress next week. It comes at a time that oil prices are hovering at their lowest levels in 13 years, according to the Energy Information Administration. Those prices have helped consumers at the gas pumps but wreaked havoc on the oil industry and been stumbling blocks for the global economy.

Obama's proposal comes two months after the world's leading nations reached an agreement in Paris to curb emissions that contribute to global warming. In the United States, approximately 30 percent of greenhouse gas emissions come from the transportation sector, the White House said Thursday, and the tax on oil will spur a switch from fossil fuels to more environmentally friendly energy sources.

"On his way out of office, President Obama has now proposed making the United States less competitive." - Jack Gerard


"By placing a fee on oil, the President's plan creates a clear incentive for private-sector innovation to reduce our reliance on oil and at the same time invests in clean energy technologies that will power our future," the White House said.

The tax would be phased in over a five-year period. Though it is levied on oil companies, motorists could see an approximate 25-cent per-gallon increase in gasoline prices as a result, according to multiple analyses. Jack Gerard, president of the American Petroleum Institute, says the White House proposal would harm consumers.

"The White House thinks Americans are not paying enough for gasoline, so they have proposed a new tax that could raise the cost of gasoline by 25 cents, harm consumers that are enjoying low energy prices, destroy American jobs and reverse America's emergence as a global-energy leader," he said. "On his way out of office, President Obama has now proposed making the United States less competitive."

Obama's proposal includes $20 billion in spending above current levels on increased transit options between cities, suburbs and rural areas and aims to make high-speed rail a "viable alternative to flying" in major regional corridors. It includes an additional $10 billion for shifting the way local, state and regional governments plan new projects together and for clean-vehicle infrastructure. 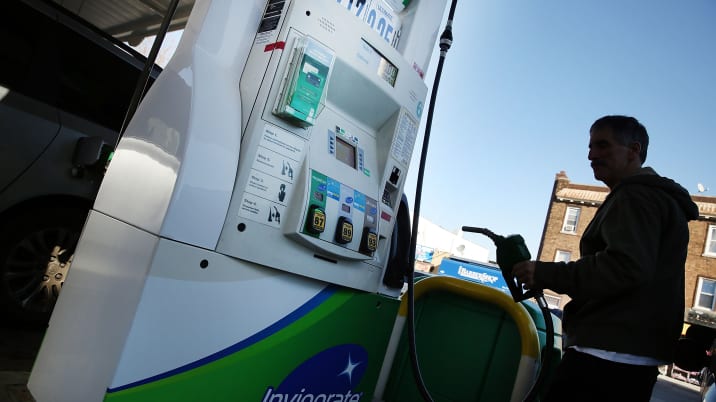 "The investments in vehicle research and deployment would get clean autonomous vehicles on the road more quickly and more safely, while ensuring electric cars and other alternative vehicles have the technology and the charging infrastructure they need," the White House said.

It's not the first time Obama has focused on electric vehicles. Early in his tenure, he predicted 1 million EVs would be on American roads by 2015. That didn't happen, but Thursday's proposal paves the way for their eventual arrival.

The proposal earmarks an additional $2 billion per year in research and development for clean autonomous vehicles and aircraft. It's unstated, but a portion of that money could be used to help build and administer a national connected and autonomous car testing facility in Michigan. Earlier this week, state officials sketched plans to build a 335-acre testing facility that incorporated some level of federal involvement. The plan also would expand funding for the Diesel Emissions Reduction Act Grant Program.

"By placing a fee on oil, the President's plan creates a clear incentive for private-sector innovation to reduce our reliance on oil." - White House statement


Overall, the proposal increases funding for clean transportation initiatives by about 50 percent from current levels provided in the American Recovery and Re-investment Act of 2009, according to the White House.

Beyond clean initiatives, the plan would fund the Highway Trust Fund and more everyday repairs needed on highways and bridges.

Introducing the plan, the White House reminded lawmakers of the investment President Eisenhower made in the interstate highway system, which connected 20th century America and paved the way for growth of new cities across the country.

"But what remains today of that system is not ready to meet the challenges of a growing 21st century economy," the White House said. "What used to be the world's leading transportation system is no longer even in the top ten."