Meet The Baja-Grade Raptor, Fundamentally The Same As Your Dealer-Lot Raptor

Alex Kierstein
The new 2017 Ford F-150 Raptor is going to be one of those "the more things change" situations. It features a 3.5-liter V6 EcoBoost engine good for (probably) 450 hp instead of a V8, and a 10-speed automatic instead of a 6-speed, but it's still a brutish thing. Ford's eager to hitch it to a feat of daring and endurance, and so the new Raptor is going racing. Of course it is.

Awesome, sure. Predictable? Maybe, but that's not a bad thing. The part that's worth paying attention to is that the 2017 Raptor will compete in a factory stock racing class at events sanctioned by the Best in the Desert off-road racing sanctioning body. According to the 2016 rulebook, that class requires the Raptor to use its factory engine, unmodified down to the emissions control exhaust, and a transmission as provided by the factory. While Ford can't alter the suspension mounting and pivot points, they can swap out the stock dampers for similar but race-optimized units. Taller springs provide a bit of a lift. That's pretty much it on the dynamics side. 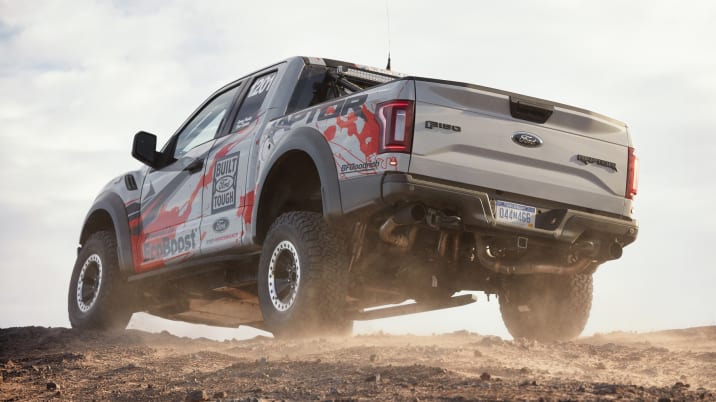 Other alterations include a full roll cage, aftermarket seats with safety harnesses, window nets, an LED light bar, and the navigational and data logging systems needed to navigate in the desert. There will also be a fuel cell, another nod to the realities of off-road racing.

What's good enough on the road-going Raptor to make it into the race truck? Ford's happy you asked, and eager to note that the fully-boxed frame and Torsen front diff are robust enough for the punishment. The Ford Performance dual exhaust and 17-inch beadlock wheels shod with BFGoodrich All-Terrain KO2 DOT-legal tires also make the grade. Likewise the Terrain Management system, which will probably be left in "Baja mode" for most of the competition. That preset is optimized for "high-speed desert running." Sounds like the right one to select.

The first race featuring the new Raptor, if you'd like to see it in action, takes place February 4th through 7th at the Parker 425 in Arizona. After that, it's the famous Mint 400 in Las Vegas in March. Check out the BITD site for the rest of the race dates, if you're so inclined.