Just in time for this weekend's Rolex 24 Hours of Daytona, the new Alpinestars Car Pack for Forza Motorsport 6 on the Xbox One lets you slip into the driver's seat of last year's winner. If you want to take something much weirder for a spin, the collection also includes a 2005 Pontiac Aztek. The download is available now for $6.99.

The Ford #02 Chip Ganassi Racing Riley Mk XXVI Daytona was in a four-car battle early in last year's race, but it eventually was victorious. Forza Motorsport 6 also challenges drivers who download the car to a new Rivals event around Daytona, and the fastest people could win Alpinestars prizes.

If you're nostalgic for a classic Daytona racecar, this pack includes Mercury #15 Whistler Radar Cougar XR-7. The V8-powered beast won the IMSA GTO class in the 24-hour event in 1990. It should be fun around the game's longer road courses like Road Atlanta.

This collection also has an eclectic mix of vehicles that aren't racecars. The controversial Aztek and the equally-controversial 1996 Subaru SVX take their places beside a lineup that offers drivers three eras of performance cars – a 1967 Sunbeam Tiger, 1974 Toyota Corolla SR5, and 1992 Alfa Romeo Milano Quadrifoglio Verde. The video below shows all of them in action.

With the racing season set to kick into full gear during this weekend's Rolex 24 Hours of Daytona race, Forza fans now have a chance to get their own taste of endurance racing glory with the Alpinestars Car Pack for Forza Motorsport 6, available on Thursday, Jan. 28. Leading off the pack of seven cars is last year's 24 Hours of Daytona winner, the 2015 Ford #02 Chip Ganassi Racing Riley Mk XXVI Daytona Prototype. The prototype will be fielded in this weekend's race, which begins at 2 p.m. EST on Saturday, Jan. 30 and can be viewed live on Fox Sports 1 in the U.S.

The Alpinestars Car Pack features six additional cars, each with a unique pedigree all its own. From the 1990 Mercury #15 Whistler Radar Cougar XR-7 – also a competitor in Daytona 24 Hour events of years past – to the inimitable 2005 Pontiac Aztek (famous more for its fictional owner than its performance), this pack has something for every kind of car fan.

Forza Motorsport 6 is the only game where players can drive last year's Rolex 24 Hours of Daytona winner on the recently remodeled Daytona International Speedway. To celebrate this, beginning on Jan. 28, Forza Motorsport 6 players will be able to compete in a special Rivals mode featuring the Ford Daytona Prototype on the Daytona Sports Car Circuit for a chance to win amazing Alpinestars prizes. See the full rules for more information.

The Alpinestars Car Pack is included at no additional cost to owners of the Forza Motorsport 6 Car Pass, which brings a new set of seven cars each month for six months. That's 42 cars in total. If you don't have the Car Pass, the pack can be purchased separately for $6.99. Cars can also be bought from the pack individually.

Here's a deeper look at the Alpinestars Car Pack.

A look at the drivers for Ford's #02 Daytona Prototype might cause you to do a double-take. At the very least, it will make the team's victory at last year's Rolex 24 Hours of Daytona simple to understand. IndyCar champions Scott Dixon and Tony Kaanan joined NASCAR stars Kyle Larson and Jamie McMurray to form a super team with all the right skills. The Riley Mk XXVI chassis is a proven winner with eight consecutive Rolex 24 Hour race wins and team championships. The icing on the cake is in the heart of this beast – a 3.5-liter Ford Ecoboost V6 delivering a grunty bottom end and a screaming top end that pushes this racer to astounding speeds. It's waiting for you to charge through a couple laps at Daytona, or maybe carry you to your own endurance race victory.

The seventh-generation Mercury Cougar XR-7 battled with its palindromic nemesis – the Mazda RX-7 – in the IMSA GTO class. The Cougar had won the series in 1989 with driver Pete Halsmer, who switched over to import rival Mazda in 1990. Halsmer was replaced by a young Robby Gordon. Gordon won his debut race in the GTO class at Daytona at the wheel of the Whistler-sponsored Cougar. With teammates Calvin Fish and Lyn St. James, Gordon and the team placed fifth overall. The Cougar and its drivers would also win at Sebring that year. By the end of the 1990 season, Mercury added another championship to its long-running string of victories. Gordon would go on to win in nearly every racing series with four wheels. This V8-powered version of the #15 (there was also a turbo-V6 for tighter courses) is more than a handful. Tame the Cougar and you will have a strong ally in your fight for victory.

How do you make a snazzy roadster more appealing to the world market? Easy, drop in a V8 engine. Such was the problem British manufacturer Rootes Motors had with its underpowered Sunbeam Alpine, and such was the solution proposed by Formula 1 champion Jack Brabham. Rootes had discussed a Ferrari-powered partnership, but talks broke down. Brabham suggested a Ford V8 powerplant that led Rootes' west coast sales manager to look up the local authority on Ford V8-powered roadsters, Carroll Shelby. Shelby developed a lively prototype using a Ford 260 V8. The final 633 models of 1967 (more than 7,000 total were built since 1964) has the even more powerful Ford 289 V8. The 289 rocketed this 2,500-pound roadster around roads and racetracks and is the drivetrain used in Forza Motorsport 6. British heritage meets American muscle: it's a melting pot with all the right ingredients.

The Pontiac Aztek's futuristic styling (targeted at "Generation X" car buyers) was well received upon its reveal in 1999 and enjoyed a short production run as a "sport recreational vehicle." Though it boasted flexibility and cool features like an attachable tent and a cooler in the rear center console, the Aztek has commonly been cited as a failure. Some may attribute that failure to its "futuristic" looks. Others point to the Aztek's lack of segment identity. After all, it was built on a shortened minivan platform, but it isn't a minivan. It is a four-wheel drive, but not an SUV. It was built by Pontiac, but it didn't deliver the performance the marque was known for. Perhaps selecting the Aztek as Walter White's ride of choice in Breaking Bad was an apt metaphor: each shared the dilemma of wanting to do good, but failing by design.

Born during an age where the four-door sports car was in its infancy, the Alfa Romeo Milano Quadrifoglio Verde is still the red hot Italian you expect it to be. Regardless of how many doors it has or how big its trunk is (and it is cavernous), the Milano QV was compared to the Porsche 911 and models from Ferrari in its time. Alfa Romeo has always been synonymous with styling that stands the test of time and performance. Well, performance and plenty of required maintenance to keep each precision-tuned masterpiece running like a Swiss clock. In Europe, the Milano is known as the 75, marking Alfa Romeo's 75 years of production. Technologically, the Milano is a full of marvels such as inboard disc brakes and a perfect 50/50 weight distribution, due in part to a rear-mounted gearbox. It's one sedan that will have you ogling its looks while you hunt apexes at the track.

The Corolla was never meant to inspire excitement. It was built to deliver the entry-level car buyer a reliable, trouble-free driving experience. The E20 generation sold from 1970 to 1974 in the U.S. and loyally served millions of drivers. The Corolla's simple 1.6-liter overhead-cam engine made a lively 102 hp and handling was nimble thanks to a front sway bar. By 1970, the E20 was the second best-selling car in the world. These days a good-looking E20 Corolla will turn the heads of import lovers and inspire thoughts of its drifting potential. In its time, "Car & Driver" magazine entered a 1974 Corolla SR5 into SCCA competition where the rear-wheel drive "coke bottle" coupe matched up nicely with the Datsun 510s that dominated the track. So whether you love the Corolla for its nostalgia or its performance, both can be had for a small cost.

The Giugiaro-designed SVX, short for "Subaru Vehicle X," replaced the aging and angular XT Coupe and gave Subaru buyers a chance to own a true concept car. Introduced at the 1989 Tokyo Auto Show, the SVX's slippery lines and "aircraft-inspired glass-to-glass canopy" were striking, mirroring designs kept mostly to Italian exotics. The unconventional window-within-a-window was carried over from the concept car, though many owners were puzzled as to what purpose it truly served. At the time, the EG33 3.3-liter boxer V6 was the largest Subaru motor to date, bringing with it a potent 231hp. Being a Subaru, the SVX was of course all-wheel-drive. With looks that stood out and power to run with top end models from many competitors, the SVX was an anomaly among an otherwise practical fleet from Subaru. 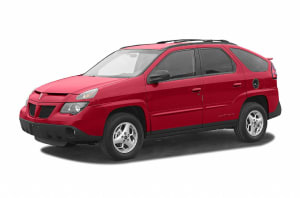