Why Have A Boring Plug-In Hybrid When You Could Have A 330e?

View All Specs
Add a Review
Piecing together the i8 eco sports car taught BMW some valuable lessons, some of which you'll see in the next generation or two of the company's electrified mainstream cars. You won't have to wait that long for BMW to deliver on the key lesson, which can be seen right here in the 330e: make hybrids fun to drive and don't make people compromise on what they like.

The 330e neatly sidesteps the traditional character-blanching entry ticket you get with hybrids by delivering almost as much torque as the 340i and a sprint time to 62 miles per hour of 6.1 seconds. For most people eco-conscious enough (especially in a time of cheap gas) to bother with plug-in hybrids, that's going to be quick enough. And so is the 140-mph top speed. 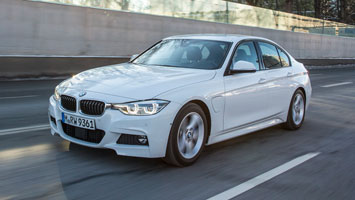 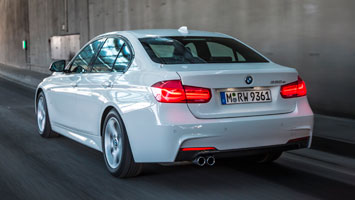 It won't quite manage the precision of a normal 3 Series because it's 353 pounds heavier, but it's not far away.

This 330e is (theoretically) capable of delivering 25 miles of electric-car range or ridiculous amount of range as a gasoline-electric hybrid. It will post a 44-gram CO2 emissions figure and officially deliver 1.9 liters/100km on the NEDC test cycle in Europe, which translates to 124 miles per gallon equivalent in the US, though it's unclear what the EPA-certified number would actually be.

While punching in a straight line is always good, and sipping fuel like it's being rationed is nice, the key part to the 330e is that still handles like a 3 Series should every time you arrive at that one fun corner. It won't quite manage the precision of a normal 3 Series because it's 353 pounds heavier, but it's not far off. BMW has buried the 7.6-kWh lithium-ion battery pack beneath the cargo floor, while the electric motor resides up front, so the weight distribution moves from 50:50 to 49:51, leaving it a touch heavier in the back. Effectively, it's a 3 Series with the 320i's 2.0-liter, four-cylinder gasoline powertrain, the standard eight-speed automatic transmission, and an electric motor sandwiched in between to create a hybrid.

The electric motor adds 87 hp to the gas engine's 181 horsepower to offer 248 hp of total power (yes, we know they don't directly add up, but that's the total output). While it has 74 pound-feet of continuous torque, the electric motor can overboost to 184 lb-ft when it needs to. Add that to the gas engine's 214 lb-ft and the car has a maximum of 310 lb-ft – 22 lb-ft shy of the 340i, without pumping out as many emissions. 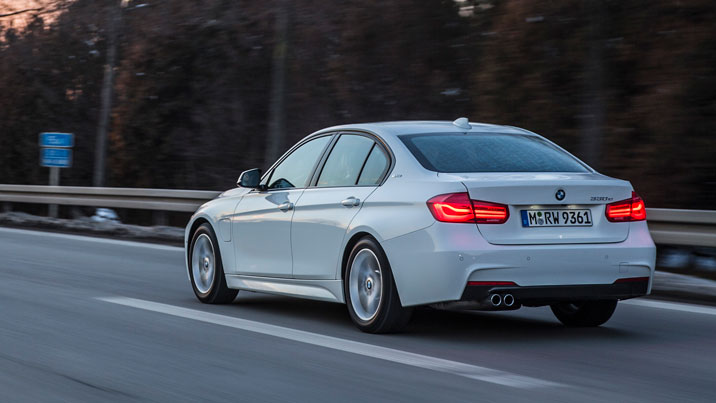 The beauty is that it's capable of running as an electric car while asking you to make very few compromises anywhere else.

The 330e's brain is geared, in its default-driving mode, to drain everything possible from the battery by the time you get to where you're going, because that's the most efficient way to drive. The 330e does all of this by judging the navigation route, including real-time traffic information, and giving the ECU a which-engine-to-use-now template for every meter of every drive. Enter a destination, and the 330e thinks about how much city driving there is on the way, how big the hills are, how much hard acceleration it might need to do, now many miles it will do on highways, where the gas engine is more efficient, and even where it might have to brake frequently. It figures out where the electric motor should work alone, when it should be a support act for the gas engine, and when the electric motor should harvest energy through the brakes.

The 330e has the flexibility to switch stuff up if circumstances (like, say, the angle of your right foot) change, and for true eco-warriors there are two progressively greener driving modes available. Max eDrive can rip up to 78 mph as a pure electric car, while the default mode's electric-only power tops out at 49 mph, though both figures are shy of 140 mph, which is where the 330e runs out of puff. It feels about that fast, even in its standard, default setting. Sure, you can drive it around with a light throttle, hoping to never hear the slightly clunky start-up of the direct-injection, turbocharged four-cylinder engine, but then you might as well have gone all-in on an i3.

Lots of hybrids can run in pure EV mode. The beauty of the 330e is that it can run as an electric car while asking you to make very few compromises anywhere else. 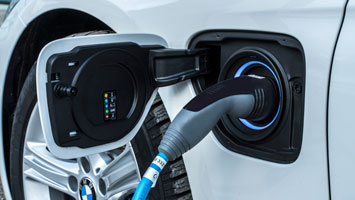 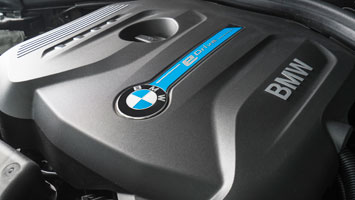 If you just drive it like a 3 Series and forget economy, the car will jump off the line and feel like a 340i.

You can toggle between the operating modes between Auto eDrive, Max eDrive, and Save Battery (to, err, save the battery's charge) if you want, but there's not much point. If you plug your destination into the navigation and it looks like 200 miles of freeway driving and 20 miles of city driving, the computer will save the battery's charge anyway, knowing cities are the most efficient places to drive in EV mode. The car will also use its speed zone-detection technology in concert with the navigation to automatically flick the electric motor on and the internal-combustion one off every time you come into a new town – and then switch that around again as you emerge out the other side. It does it almost seamlessly, too, and you quickly forget it all this stuff and just drive the damned car. Which is surely the point.

The gasoline motor can feel rough when it chimes in after a long slumber, but that's the only time you really notice where the seams join. As compensation of sorts, the gas engine reaches maximum torque at just 1,350 rpm, and even better, the electric motor delivers all 184 lb-ft of overboost instantly.

If you just drive it like a 3 Series and forget about economy, the car will feel like a 340i off the line. The low-end strength of the electric motor means the turbo can take its own sweet time spooling up and the car's none the worse for it. The electric motor has better throttle response, too. It can easily light up the rear tires before the traction control can step in, and the car will cheerfully slide just enough to be entertaining before the skid-control gets in on the act. Or it will do lots of both if you turn the safety nets off. The 330e feels like it has a little more roll steer than a standard 3 Series, and that has less to do with the rear weight bias and more to do with how high the additional mass is carried. It's still a fleet-footed handler. 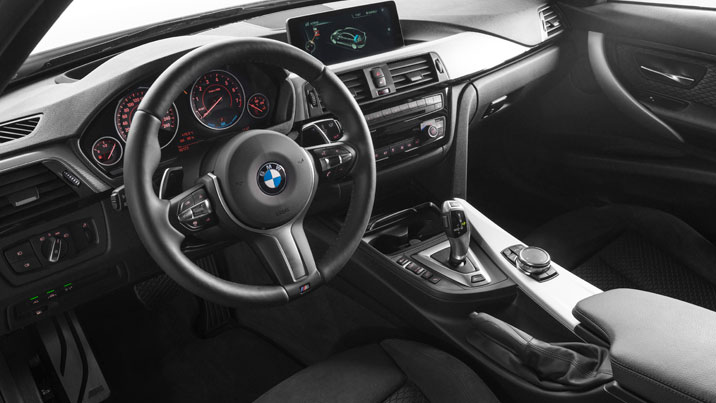 You have to sit in a 3 Series cabin that feels decidedly less premium than its rivals.

Unlike some hybrids, the 330e's power is all delivered up front, pooled together if necessary and then sent through the automatic gearbox. It's a simple, intuitive way to drive.

But there's more. The variable steering that so blights the 340i isn't standard here, and the electro-hydraulic steering is far better and more intuitive in the fun bits without losing anything in daily (commuting) life.

The brakes are strong, and pad wear is decreased hugely because the brakes only ever work on hard stops. Light-to-moderate stops and brushes are all done via the electric motor, which converts the energy and sends it to the battery. Even the transition point in the pedal travel at which the friction bits take over is seamless. It rides well, too, quite possibly helped by running on high-profile 205/60R16 tires that will almost certainly be upgraded by almost every buyer. So forget we mentioned it.

There are other things that aren't so great. The trunk only has 13 cubic-feet of space, but with rear-wheel drive the 3 Series has never seriously threatened the A4 for luggage supremacy anyway. The floor is flat, which is a bonus, and the rear seat splits 40:20:40 if you need to cram in longer loads. You lose some space beneath the floor that the charging cable's bag (about half the size of a briefcase) takes up. 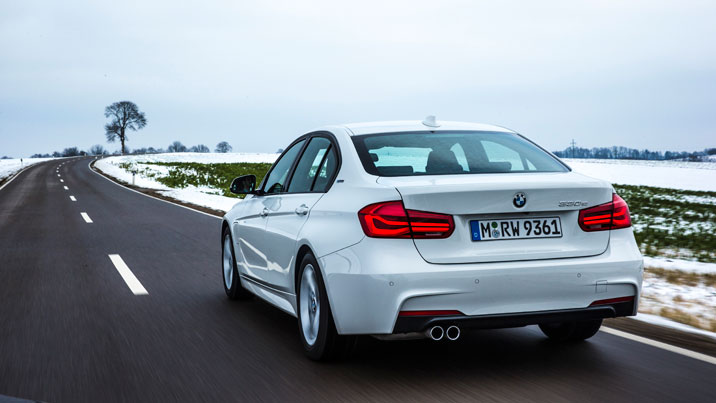 For most people, most of the time, the 330e will do just fine.

BMW counters by promising the 330e will charge in 3.5 hours on a household power point or less than 2 hours on a fast charger. You can use the electric power to heat or cool the cabin via a smartphone app while the car is still plugged in, long before you even get to it. Perfect for hot summers and frigid winters.

But its biggest shortcoming is nothing to do with electrical power. It's that in an era of the new Audi A4, the new Mercedes-Benz C-Class and the new Jaguar XE, you have to sit in a 3 Series cabin that feels decidedly less premium than its rivals. The plastics are all pervading and feel relatively cheap, and there is even an old-school handbrake.

Otherwise, the biggest and most obvious compromise is that when the battery is flat ("flat" really means it's slipped below its 5.7-kWh of net operating range, because it's never allowed to go properly flat), you're using a four-cylinder petrol engine to carry around 353 pounds of dead weight. That means performance is blunted and fuel consumption climbs.

BMW has delivered a midsize four-door sedan that goes like a 340i but uses a third of the fuel, or none at all in its electric mode. The real shortcoming of the 330e has nothing to do with its powertrain, but that it's stuck with the downmarket 3 Series interior. But for most people, most of the time, the 330e will do just fine. 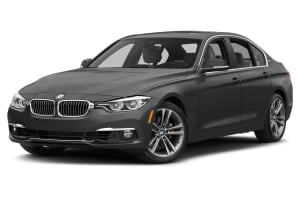